The Death of a Loved One and Dreams

On May 30th of this year, my 54 year old brother died suddenly of a stroke. It's been five months to the day since he passed. When I think of him, I still get choked up. I'm not one to remember my dreams, but I've had three dreams about him since he left us. The first dream was very comforting. We were in a living room talking with lots of other people around, and he seemed well. My grandmother, also deceased, was there too, although she did not speak in the dream. I woke up feeling like Steve… Continue

Treat the Earth and all that dwell therein with respect


Remain close to the Great Spirit


Work together for the benefit of all Mankind


Give assistance and kindness wherever needed


Do what you know to be right


Look after the well-being of Mind and Body

The girl who silenced the world for 5 minutes

Many on these boards do not like to hear this stuff coming from my mouth...So, What about the mouth of the future… Continue

Does it end now?

Is it over? A nice run it was. This must be similar to what people felt like in the Bay of Pigs. But there's no Russian bear to negotiate with. Obama's the new Kennedy, maybe he'll show some toughness to Iran.

Israel starts shooting and we'll have at least a Middle East disaster. How could we not get involved?

We don't start shooting and we have a nuclear Iran. I've read often that Israel is completely under the US's thumb. If true, it's unlikely Washington would bless an… Continue 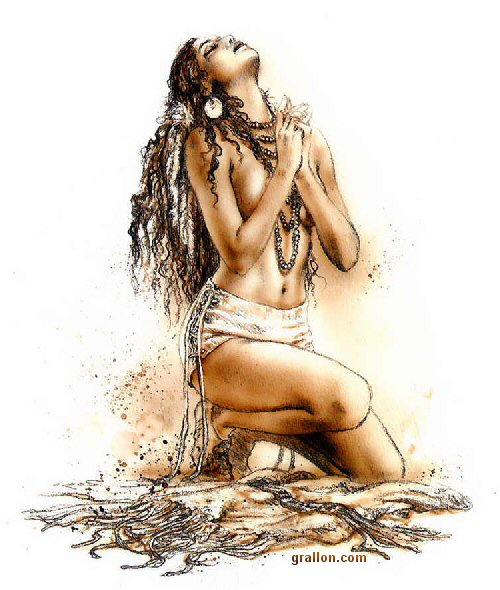 as the grasses are stilled with light.

as old stones suffer with memory.

as blossoms are humble with beginning.

as the mother who secures her young.

as the tree which stands alone.

The Art of the Blog -- A Home for the Alienated Soul

From my childhood years to middle age, I have been a solitary and lonely man. Repeatedly I have identified throughout my life with the miserable and the forlorn, and I have clung with a death grip to whatever person, place, or belief that seems the current answer to my anguished and ceaseless search for orientation and structure. Malcolm Lassman -- an individual of substance and good standing in the community of lawyers -- used to say to my sister: "He acts as if this is the only place he can… Continue

I figured I should write a post about the music players in case no one opens Jumping Barracudas.

Please People...If you create players for the blogs set the sound on the players to off before you copy and post them. You will still be able to listen to them by pushing the play button.

When several people post their players to the blogs at the same time( then we pass over your players) they automatically play all at the same time, forcing us to have to pause all of them… Continue

Tribute to Glenn A. Fine, Esq.

Beginning in the fall of 1985 I worked at the law firm of Hogan & Hartson in Washington, DC. At that time a law clerk named Glenn Fine worked at the firm. He was clearly a superior individual who has gone on to have an outstanding career in the law. I am proud to say that I worked in the same organization as he did.

The past few years have been some of the most tumultuous in the Justice Department's history. Nearly the entire department leadership resigned in a scandal over… Continue

This is a video where people say what they are actually thinking instead of what normally would be said. There is foul language, so if you have sensitive ears do not watch this. Now I get to thinking...Since I have said that...People will go there just like little kids in a candy store....Please do not come back and tell me how disgusting it is and how dare I post it. This is why I warned you. It is also why I am sending a link instead of direct posting....


I hope I am wrong… Continue

Odets's dramatic style is distinguished by a kind of poetic, metaphor-laden street talk, by his socialist politics, and by his way of dropping the audience right into the conflict with little or no introduction. Often character is more important than plot, which Odets attributed to the influence of Anton Chekhov. Odets' plays include Waiting for Lefty (1935),… Continue

In the late 1980s I worked with a women named Esperanza ("Espe") Rebollar at the law firm of Hogan & Hartson in DC. She once made a comment that I found odd. She was talking about the fact that the Jews had been blamed for the murder of Jesus Christ. She said: "Everybody knows the Pope forgave the Jews for that years ago." Isn't that an odd comment to make in the workplace?

Growing Up Jewish in Philadelphia

Roots. My father's parents were Jewish immigrants from the Baltic states. My grandfather was born in Vilna, Lithuania. And my grandmother came to the United States from Riga, the capital of Latvia. My grandmother's native language was German, my father used to proclaim proudly. "She didn't speak Yiddish like some prost Russian Jew."

They hadn't known it, these Northern and Eastern European Jews, but each of them, pondering the momentous decision to leave the native country, was only… Continue

Did you see the news today? It seems there was a RED STORM over Sydney Australia. Huge plumes of red dust carried on the wind from the outback. Dust so thick you couldn’t see, couldn’t breathe.

EeYeah. I know what that’s like. We had one of those around here just this weekend. Ha-ha. EeYeah. A RED STORM. The only thing is NOBODY KNEW.

Here's the latest on my friend, Craig Dye. He's come a long way since I first met him. I, on the other hand, have turned inertia into an art.

The University of Maryland, College Park, has named Craig Dye to head its angel investing group.

Dye will lead the Capital Access Network, which joins together angel investors with early-stage companies for deals worth up to $1.5 million. The network is part of the university’s Dingman Center for Entrepreneurship in the Robert H.… Continue

Anti Social by choice, not by label

You could go crazy trying to figure it all out. I am now basically antisocial... I am slowly trying to rearrange my thought patterns to new ones not polluted by the daily sick things I see. I don't see people much anymore..I see a society of controlled zombies. People with no enlightenment...no moral compass. They think if they believe the words in their religious books they are saved when they buy their guns and try to make others look like devils....Crazy, absolutely… Continue I find myself meditating upon ignorance and stupidity. I guess because we're in America you should probably throw arrogance in there too. To attempt a conversation where people are not threatened, scared or offended unnecessarily, requires one (me, anyway) to be constantly pulling one's punches, so to speak. The goal is "to speak so people will hear what you are saying, rather than how you say it." It is, for the plain spoken among us, exhausting. Most of the time it is worth it, but there are… Continue

He never quite fit into the local society of boys. He usually would not play with them. In school, he seemed an isolated, dreamy boy who didn't like rough play. One classmate found him "strange and conceited, without the usual interests of a boy." Another observed that he had no close friends, and that he seemed to prefer writing and illustrating stories to the more routine school subjects. He was lazy, too, and did not participate in class projects with any enthusiasm. A survey of his report… Continue

....still working at it....but really, I'm doing the same things I've done from the start; walking, drinking water, eating less, making healthy food choices, saying no to seconds and certain kinds of foods, etc. Lifestyle choices, NOT dieting. And if I want to eat a delicious wild-blackberry cobbler with a gob of creamy, vanilla icecream? I DO!! But I try to share it with a special friend.... :) It makes the experience that much sweeter and guilt free! Oh, but I never mentioned the guilt part.… Continue

Kyle XY was an American drama television series. The show revolved around a boy named Kyle, who awakened in a forest outside Seattle, Washington, suffering from amnesia. The series followed Kyle as he tried to understand the mysteries of who he was and why he had no memory of being a child. He was sometimes shown with his shirt partially removed, revealing that he lacked a navel.

The fictional television drama Kyle XY, broadcast on the ABC network in the summer of 2006, has close… Continue