This Is Your Life.

Kat, or maybe it was akabukowski, once said to me that everyone thinks their life would make a good book.

She is probably right. What do you think?

Here is your chance.

Let's all tell stories from our experiences as we traveled through time.

Ahh, but there has to be rules. They will be pretty loose, but rules there must be.

1. It can be any experience that you want to tell us about.

2. It can be as short as one line. Or as long as fifty. Anything over thirty will be deleted.

3.You do not have to end the story at fiftyy lines, but you have to quit writing at the end of fiftyy lines. You can not post again until at least one other person  has posted something.

This ensures that everyone gets a chance.

4.You can continue on the same subject or jump to a new one.

5. Nothing is required to be in chronological order.

6. Very Graphic Sexual discriptions should be posted in the sex talk group. You can direct us to go there if we want to read about it.

7. No one will be checking the facts

8. Additional rules will be posted and implemented as I see fit.

Step right up and post. who knows, the next knock on your door may be Spielberg asking for the movie rights.

Yee gadz ROBBIE - this very interesting Discussion of yours has gone to 15 pages already!

So I shall keep coming back until I have read through all the great, insightful stories

that folk are leaving here for everyone to enjoy, and, I think it certainly is true

that every person living has a story to tell, and every one of those stories

isthmus that is no more than 1/4 mile wide. On the Isthmus is a town named Sinope. it was the birthplace of Diogenes. Diogenes was the guy who carried a lanturn around looking for an honest man.

The Turkish population of Sinope at that time was maybe a thousand people. We had about 3 or 4 hundred  NATO soldiers on the hill. All males. The nearest comercial airstrip was about 140 miles away. That doesn't sound too bad. Except that it was all dirt road running through the mountains along the Black Sea. At some points the road was about 1500 ft above the water and it was straight down. There were also places were at times they had to cut new road because the old road had sid into the Sea.

We had three aircraft on a landing strip about five miles from the post. Two U-8s and one DeHavilland Otter.

The Otter would carry 9 personell where the U-8s were outfited to carry only about 4 passengers and two crew.  The Otter is a very slow, but very safe aircraft. It is used a lot by Bush pilots in Alaska. At the time we only had one pilot and two maintenance personnel assigned. This was the hight of Viet Nam and most personnel were sent there. However, we were considered by NATO to be a pretty important outpost. So, we got a fair amount of visitors.

The Lone pilot that we had was a Chief Warrant Officer who was in his fifties. That was considered old by army aviation standards, but he could fly , and had flown just about every aircraft in the Army inventory. His assignment prior to this one was as the 3rd Army Commanding General's pilot. A lot of the visitors were coming to see the operation for which I was one of the Maintenance Officers. The pilot, Let's call him Chief Smith, or Smitty, was quite a comedian and bored by the assignment. He had previously served two tours flying gun ships in Nam. So, anyway, I would often fly down to Samsun with him to pick up the visitors.      A lot of the flight was over the water, so everyone had to have a over the water briefing prior to takeoff. Smitty always had the plane rigged so that  the passengers had headsets plugged into the inter com.  I would be in the co-pilots seat. He would crank up the engine. The Otter engine did not run smoothly, but it always ran. Smitty would then pull out a pair of glasses that he had specially made himself. The lens consisted of the bottoms of coke bottles. He would stand up, turn around, put on the glasses, and proceed to read the Over-The-Water briefing. Which he of course had memorized. Then he would turn around Sit down, and making sure he had the intercom cranked up he woud say "Robbie" "Can you tell me what the Altimiter reads"? I think it's the third guage from your right. Ok, Now let's see if we can get this baby in the air and clear that building with a little more room than we did last time.  He would gun the engine and off we would go. With the passengers in the back sitting ramrod straight and holding on for dear life.

Yep. there were probably a few pucker marks on the seats back there. It was a hell of a lot funnier in real life than it is reading it.

A snap shot of my late teen years. It was written when I was 19  as a freshman writing assignment. I'm so glad I saved it all these years. I had to dig deep into my closet to find it.

I used it in my transfer application to Barnard/Columbia Univ and got accepted. I guess they like creativity.

Note:  I was a rather sheltered Catholic school girl insulated in my ethnic upbringing. I grew up fast during college and soon after. Also note, just because I appreciated by History teacher's class doesn't mean I am a socialist as well. lol 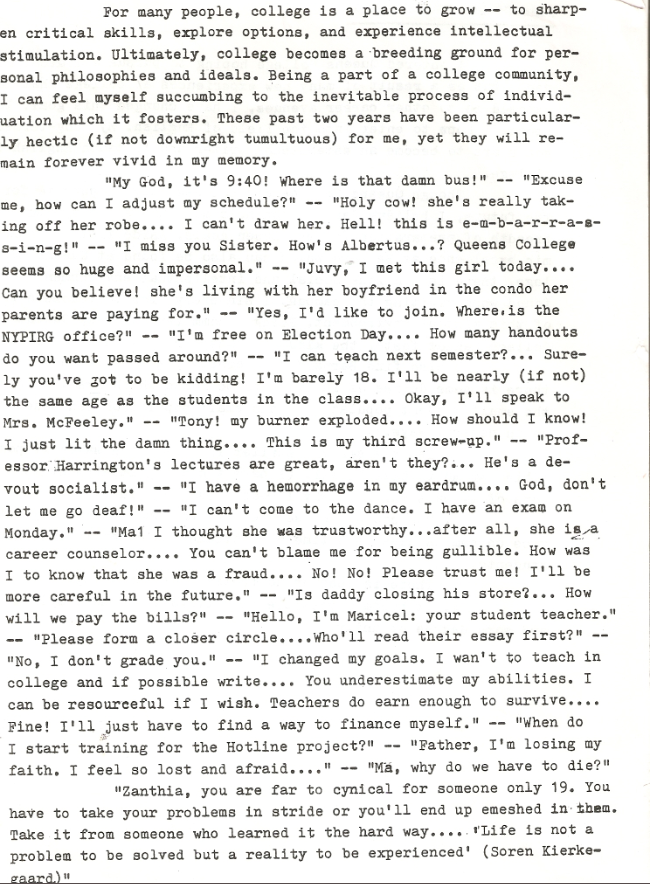 I feel so strongly in wanting to reply to everyone, but I have only discovered this

Discussion of ROBBIE'S today, I just want to say to everyone, that we need to always

be our own very best friend in life, never, ever give in or up,

and every morning when you look in your mirror, remind yourself of

to experience this Journey called Life.

I really do feel deeply for all of your struggles, because,

Thank you to all who have bared and shared their story,

as you are truly an inspiration to all of us here.

Permalink Reply by funesthememorious on June 8, 2011 at 8:29am
One night my college room mate and I decided to explore the steamy riverfront netherworld of Troy NY. We ended up in a biker bar where my room mate somehow managed to insult a table of bicycle chain laden ruffians. They not so kindly informed us they would be waiting outside the bar when we exited. So not only would my friend receive a thrashing, just by guilt of association I would too. Luckily my friend had rushed a fraternity that had a number of hockey players as members. He put in a call to his sponsor and about 20 minutes later a dozen hockey players carrying sticks appeared and escorted us back to campus.

I've seen foreigners come down here get all enamored and excited about the culture and the cowboys and such, but we don't try ride 'em, rope 'em and brand 'em......just sayin'....

Do the chain-laden ruffians have something they think needs to be proven?

Why the anger??? Is it part of the culture?

I'm asking a serious question here. (may be the wrong thread for that, but I don't care)

I appreciate the explanation, however there's reasons for virtually everyone on the planet to have "anger" sometime in their lives. "Having anger" doesn't mean it has to be vented in a violent, hurtful manner just because you can. Nor does it mean the rest to the world should tread lightly around your space for fear of setting you off. You're no better nor no worse than anyone else.(When i say "you" i mean all of the folks you describe above) I'm not afraid of pissing anyone off, here or in real life.

The mob mentality can do good or do some very bad things. I've seen both.

As far as respect goes I'm not gonna walk into a room and immediately respect the crowd or any individual just because they're there or for what they are wearing or what they do for a living. I have a right to my space and my opinon too.

Miss K. I appreciate you. You are intelligent and articulate,and I enjoy your posts. I was blessed with an innocent, simple, childhood...on a dairy farm South of Ft. Worth. For reasons I choose not to go into, I dislike, for the most part, the group mentality...especially the ones that cater to certain personality types or social levels. I have an open mind, however, and what you have explained helps me to understand a bit more about where you're coming from.

I respect you as a woman and a friend.

Not all bikers are angry ruffians. I would say they are more freedom-loving,unconventional,  and adventurous than the average guy. Certain motorcycle brands have an almost fanatic cult following sorta like the BMW Mini cooper which appeals only to a certain portion of the population mainly tech people or artistic people who like well built cars with an edge.

Motorcyclists in the USA (not so abroad) tend to be guys (though there are females) who tend to project an image of  aggression, sensation-seeking, toughness, though I am sure that there are many who don't fit the mold. They also tend to be older men.

Now that reminds me of a story...Hubby is in the oilfield and one of his workers is a national officer for the Sons of Silence. He would barely look at me whenever I was around where he was working. He is a wonderful carpenter and helped finish the restroom and mechanical room when we were building the store. His shirt was off and there was the entire Sons of Silence patch tattooed on his back, he has scars and looks pretty mean. When I finally joked with him enough he finally relaxed and became quite cordial. He was in a devastating motorcycle accident, almost killed him. We made the trek to see him in the hospital, he was busted up bad, his daughter was there and we visited and such. As we were leaving she asked us to take his cell phone so we could charge it, I was now the official secretary answering his phone for a week explaining to 'Dirty', One Eye, and other various folk what was happening and if I knew when he would come home.
After a long recovery he was home and has stopped in the store to visit. One day he and another 'brother'  were chatting with me talking about his wife who was in prison and how he was faithful to her. I blurted out if he wasn't faithful I would kick him in his bad leg...the one crushed in the accident. His 'brother' looked at me with a shocked expression and turned away...I then realized I had just insulted this officer. But he just smiled at me and said you won't have to kick me because I am not going to cheat on her. *whew*
I wouldn't want him or his 'brothers' pissed at me or meet them in a dark alley, but they have been nothing but polite when they stop in the store.

I am looking forward to a ride on the back of his new Harley...think the people of my little town will look at me funny when they see me on the back of that Harley? Hair flying, hanging on for dear life.