This Is Your Life.

Kat, or maybe it was akabukowski, once said to me that everyone thinks their life would make a good book.

She is probably right. What do you think?

Here is your chance.

Let's all tell stories from our experiences as we traveled through time.

Ahh, but there has to be rules. They will be pretty loose, but rules there must be.

1. It can be any experience that you want to tell us about.

2. It can be as short as one line. Or as long as fifty. Anything over thirty will be deleted.

3.You do not have to end the story at fiftyy lines, but you have to quit writing at the end of fiftyy lines. You can not post again until at least one other person  has posted something.

This ensures that everyone gets a chance.

4.You can continue on the same subject or jump to a new one.

5. Nothing is required to be in chronological order.

6. Very Graphic Sexual discriptions should be posted in the sex talk group. You can direct us to go there if we want to read about it.

7. No one will be checking the facts

8. Additional rules will be posted and implemented as I see fit.

Step right up and post. who knows, the next knock on your door may be Spielberg asking for the movie rights.

My friend came over yesterday to show me his new Harley. His reaction when I told him he looked 'kind of gay' in that outfit. Permalink Reply by funesthememorious on August 27, 2011 at 3:08am
Hey, I'm allowed to show my feminine side if I want to.

I don't think we've had to show our feminine side since the '80s, funes......its not required anymore, although probably well received in many circles.

I just said that to be a smartass....I don't really know what color mauve really is.

Permalink Reply by Maricel Evasco on August 27, 2011 at 4:03pm
Merry's response is for below. I had too many errors on my original which needed correction. lol


Reply by Merry 5 hours ago

I feel like a nap just reading that, gadzooks!!


This is probably the most unexpectedly eventful summer of my life.

Just a snapshot of the past 2 weeks:

August 16th  •rushed to the emergency room because my dad has

a bout of conjestive heart failure. All of us were worried to death

August 17th  •visited dad at hospital...He was released same afternoon after a battery of test.

August 20th  • crossed the Canadian border in the morning.

(My mom did not have her passport)

•toured Toronto on the hop on-hop off bus.

•cruised on the murky waters of Toronto harbor

my mom back into the US w/o her passport.

The experience  was harrowing but my very spunky mom got back  in.

•stopped at Syracuse University for a potty and lunch break. My mom

discovered she left her wallet w/ $300+ in the hotel in Buffalo.

•All hell broke loose in the car.

• We ate at a Chinese restaurant. I got indigestion and my

sister (the driver) got lethargic from MSG. I ended up driving the

rest of way through periods of torrential rain. Thinking about

my nightmare, I chanted my "Our Father.. and Hail Mary" in my head.

I could not see anything  beyond the windshield at times.

•stopped by SUNY Cortland along the way to see the college

my son wants to attend. In my mind: "No way Jose!"

to Villanova the next day. I had to settle things with financial

stuff for the dorm. We arrived home past midnight.

En route,  I got a call from my son saying he was in a car accident

and the cop wanted to speak w.me...I spoke harriedly w/the cop while on

the Pennsylvania Turnpike. Apparently, my car was wrecked and

In my head: "Oh My God! Oh My God!" Perhaps during those

Oh My God! moments the earthquake happened. My daughter

why so many people were on the lawn. (Earthquake evacuation).

off campus dorm. She was  reluctant to stay behind. We left

her and returned home.

shatter at 3 am.  The windows were closed then. She was frightened

and peed on the bed. (sigh) My sister instructed her to throw out the

bed sheets. We all called residential life to see if she could get transferred

to an on campus dorm. The lady in charge, a bitch, said

she'd work on it. My daughter called later again hysterical that the shuttle

to campus had not arrived yet. (sigh) I got a call from my enrollment

classes. I told her my mind is in turmoil and am thinking of deferring

enrollment until next year. She said she'd call me back Friday to confirm

ResLife biatch emailed my daughter and me about a possible vacancy.

We had to wait for further instruction. In the meantime, I mulled over

my transportation...surfed the net looking for car deals and thinking to

myself what scammers. I was on the Hundai website looking at amazing

they didn't put brakes and windshield wipers as optional too. (snorts)

August 25 th   • got a call from my daughter saying that there is a vacancy on campus.

I replied saying I'd be there tomorrow to help her move. I'm worried

because it was announced Hurricane Irene is impending.

•picked up my son from football...he was injured and has to stay

off his foot the next day. (Mama's not feeling too compassionate

after he just wrecked my car.) He knew I could blow a fuse so he

didn't complain that I didn’t feed him. Grandma took pity and gave

him money to eat because he’s hungry. Lol

• sat mulling over my package of textbooks that arrived the previous day.
My mom told me to suck it up and begin my masters program.

August 26 th   • called enrollment advisor to confirm that I would be beginning the program.

this week w/much  trepidation. All over the radio is gloom and doom about

impending Hurricane Irene. They announced that The Garden State

Parkway would be closed at 8:00 in the evening. We were on the

Parkway at the time of the announcement.

• arrived on campus to help   my daughter vacate her haunted dorms. All the

other kids in the bldg are antsy because of the impending storm. My daughter

told me she wants to come home too. We got into an argument because I

for classes. She won the argument using emotional blackmail. lol

to the new dorm on campus (St. Rita) It was twice as small as her

original dorm, but well lit and centrally located. Too bad it’s facing the

the heavy stuff, I sat down in her dorm and refused to continue knowing

I had that long drive ahead of us. She got another student to help her

move the fridge and rest of her stuff, but she did make me move her bed.

•  We left at about 7 pm. I  was nervous about the evacuation traffic.

It was horrendous on the other side when we were coming in earlier.

I guess a lot of people were fearful because there was no traffic, but the

sight that greeted me on the NJ Turnpike heading north was ominous. It

looked like an Armageddon scene  hovering over NYC and Central NJ.

I  feel it in my gut   Irene is definitely on her warpath.  BRACE yourselves. 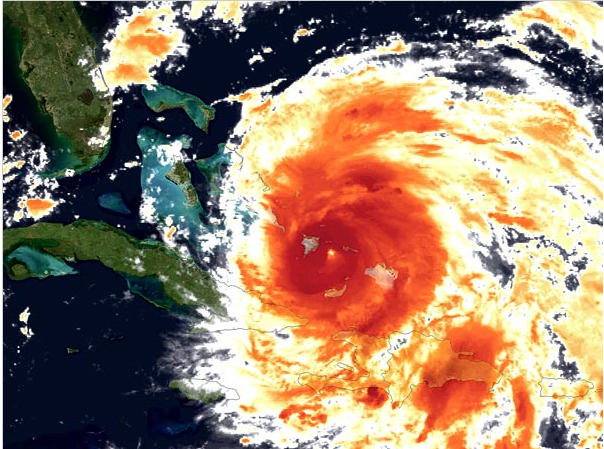 Permalink Reply by funesthememorious on September 10, 2011 at 4:07am

Back in '97 I was working for a Graphics/Litho company that had as its main source of income the printing of X-rated magazines. As part of a way to streamline our process I was collaborating with a software engineer from another company - she had a super duper computer that automated some coloring methods. I was under orders from higher ups to never allow her to come to our factory because of the nature of our business - which meant I had to drag my equipment to her office in eastern Connecticut every few weeks.

Eventually her boss insisted she come out to visit my company and report on the progress we had made. For two weeks I made it clear to my boss that there was no way I was going to meet her at the reception area and parade her through a maze of Double D Housewives, Barely 18, and Horny Slut magazines coming off the presses. Someone else would have to escort her to my office. Of course, on the day she arrived everyone was mysteriously absent and I had to go down and welcome her. However, she didn't appear that taken aback by the scenery and we had a laugh over how uncomfortable I was about bringing her through our erotica shop.

And she did get a kick out of our 4 foot vagina poster. ( For research purposes )

When I was in the School for American Craftsman, the other freshman in my class's roomate, well , his Dad was the head of an advertising agency. And I was ,I forget why I was heading there to meet them, we were in NYC and I was just dreading meeting this man and his wife. I thought it would be stuffy and horrible and uncomfortable and I'd be climbing the walls to get out of there. You know , sort of like STAMFORD, CT where half the people are incredibly stuck up and don't even have anything to be stuck up about. Common courtesy is something they cannot afford.

Anyhoo, George met me at the door in his stocking feet. I was expecting a butler. We shot the shit for a long time just like old friends meeting on the street. It was the best conversation that I ever had with someone that I had never met before. He had an extensive collection of art and he was just like a kid talking about what he collected and I recognized alot the work. He was also a friend of Diane Arbus's. How's that for dropping a name, heh? It was one of my favorite conversations of all time period. Some time afterwards his son came up to me and said that his parents really liked me and they had invited me back but for one reason or another I never went and kept that address written on a MickeyD's frenchfry wrapper in my wallet for ever. Maybe it was just perfect the way that it was. Great conversation is one of the finer things in life. I wish I had a better memory to remember these things with.

Permalink Reply by Merry on September 12, 2011 at 12:55pm
Get even and turn your' wildest revenge fantasies into a movie.