Taylor, who previously founded Monster.com, revealed the layoff news during his keynote talk tonight at a VIP dinner leading up to tomorrow’s MIT Venture Capital Conference. We could not directly follow up with Taylor but will report back as we gather additional details. The fate of Eons itself could not be confirmed.

Eons launched in 2006. Its latest venture round was a $22 million Series B round that closed in March 2007. Since then Eons has struggled to reinvent itself. Originally founded as an Internet portal for the aging Baby Boomer crowd, it had the slogan “Lovin’ Life on the Flip Side of 50.” But after spending a lot of money with little traction, it removed its over-50 age limit early in 2008 as part of a bid to remake itself as a more general social networking site.

We caught up with Taylor briefly after his talk tonight. He says he laid off seven of the 12 remaining Eons employees, leaving it with just five staffers. He said the intent behind the move was to focus his remaining resources on Meetcha.com, an Eons-developed dating site for people over 40 that launched in December 2009.

Permalink Reply by d's girl on December 4, 2010 at 10:45am
I joined EONS back when our original tbd was still up & going. Something happened, can't remember what, but a bunch of Daily Grind folks joined EONS & started a backup DG over there. So they encouraged me to join, but like others have said on this thread, I just never took to it. I probably visit it once or twice a year.

Permalink Reply by Bob Stepp on December 4, 2010 at 1:17pm
Seems logical that if they're laying people off, it's not a stable situation there.
I'll just stay here. i like you folks......*hugs*

Permalink Reply by Chez moi on December 4, 2010 at 2:16pm
Hugs back to you, Bob, and to all of you. It would be funny, ironic, whatever, if folks drifted back and found a home here after all, wouldn't it?

I visited Eons while we were in the breakup of TBD1 and found it sort of fuddy-duddy compared to our old home. We've changed a lot since then, but I still think we have a different kind of outlook here, and I like it better. Small as we are now, I hope we keep the warm spirit I feel here even if we grow again. I really am enjoying the lack of drama and conflict (with the occasional exception) we enjoy.

Permalink Reply by P.A. on December 4, 2010 at 3:35pm
I have also been on Eons for about 2 years and never could understand how it worked or what people saw in it. I met a few good people but I also encountered some of the rudest people I have ever met online.
I think there are lots of TBD people over there with inactive accounts. Once you have experience the original TBD everything else is second or third best.

Permalink Reply by Jaylee53 on December 4, 2010 at 5:43pm
"prolly a bit boring by some standards I'd say....but, c'est la vie. I'm pretty easy to entertain....no bells and whistles needed.
Real life can throw me bigger fish to fry at any given moment.....Put some lemon on it!!

Permalink Reply by Chez moi on December 5, 2010 at 6:51am
Hi, Robbie. Glad you're here. It's never boring when you & Happy are in the neighborhood. 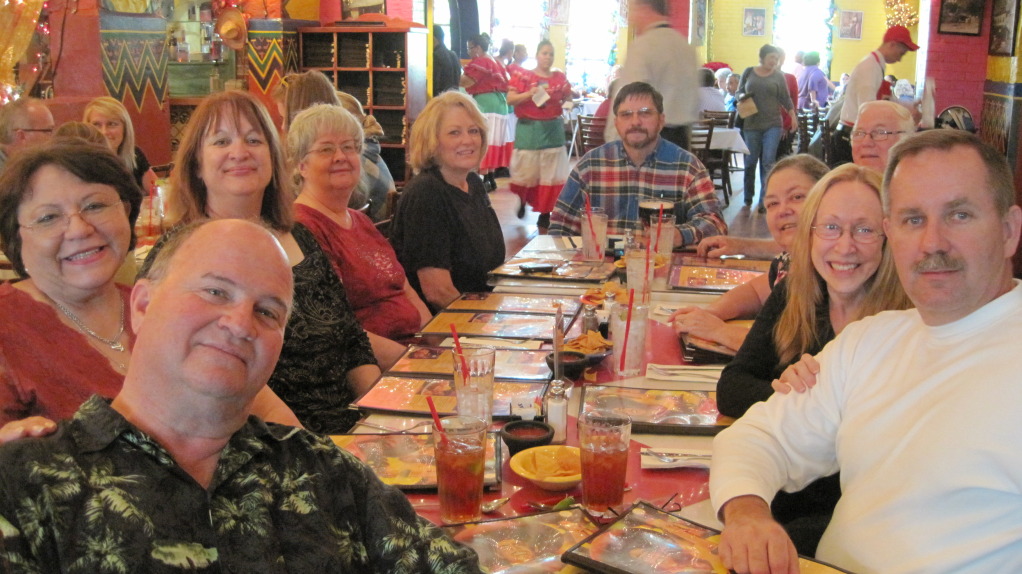 Lunch at Mi Tierra's with Eons in San Antonio.

Permalink Reply by Chez moi on December 5, 2010 at 6:53am
Aggie, you have such a talent for bringing people together. Keep up the good work! It looks like a nice group. Are some of them ex-TBD, that we might know?

Permalink Reply by Aggie on December 5, 2010 at 7:58am
Just me as far as I know. We did discuss collecting email address on Eons and moving the group to TBD if Eons goes down. Most had never heard of TBD most are a little older than the average TBDer.

We all had a great time.

Permalink Reply by Stir Young on December 5, 2010 at 12:20pm
I have an account on Eons, but I haven't been there in at least a year. Back when I first started looking for people I worked with in Yellowstone Park, I joined up. I actually did find a couple of people who were working in Yellowstone about the same time I was there, although they didn't work where I worked. Beyond that, I never used the site very often. The last I knew, I only had a couple of friends on Eons, both former TBD'ers.

Maybe I'd better go and check it out again, to see if I missed anything important.