Though I am not surprised at the ranking, I'd like to know what dominating factors contribute to our lower ranking on the global Human Development Index scale.


The 2009 report was released on October 5, 2009, and covers the period up to 2007. It was titled "Overcoming barriers: Human mobility and
development". The top countries by HDI were grouped in a new category
called "Very High Human Development". The report refers to these
countries as "developed countries". 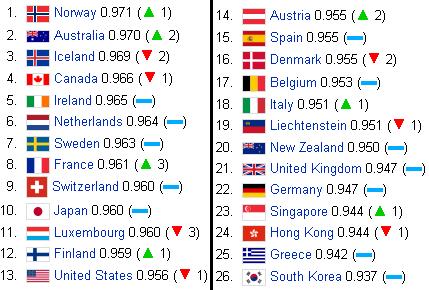 Permalink Reply by larry kremis on March 28, 2010 at 5:20am
1. Life expectancy at birth: Drugs and teen pregnancies attribute to this. Teens getting pregnant and keeping it secret as long as possible, thus ignoring pre-natal care.

2. Knowledge and eduction: No discipline in the schools, educators' hands are tied. Kids don't get the paddlings they need. Parents are too quick to sue and the laws and the courts are too liberal.

3. Standard of living: We can obviously thank our Government for that. We've been losing jobs for over 30 years now.

We're losing the war on drugs. For some reason, our leaders are allowing this. Of course there are many other factors. Not enough 2 parent homes is a huge factor. It may have started with my generation, spoiling the kids, wanting them to have what we didn't. Will it all come around again? Is it a cycle?

Permalink Reply by funesthememorious on March 28, 2010 at 5:50am
Easy - the emergence of the policy of Neoliberalism ( elite economics ) over the past quarter century or so; it minimizes the role of the state and maximizes the private business sector. We've seen that the market has been allowed to make major social and political decisions, the State has reduced its role in the economy, corporations given total freedom, trade unions curtailed, and citizens given less rather than more social protection. Look no farther than what the Tea Party is trying to accomplish - the very ideas they espouse will eventually enslave us. I guess that is how their Fundamentalist leaders manipulate them - lowest common denominator appeal.

Permalink Reply by Maricel Evasco on March 29, 2010 at 4:13am
Observed from the outside, your take on things seems to be dead on, funes.
The power and goals of corporations do not serve the population well, quite the contrary. B A F 8

Just curious BAF.....Canada is ranked #4. Why is the red marker facing downwards then?

Permalink Reply by Maricel Evasco on March 30, 2010 at 12:02am
BAF and Animak, that I knew ...I was wondering what factors may have caused Canada to drop instead of rising or holding it's place? Sorry for the confusion.

Permalink Reply by Maricel Evasco on March 29, 2010 at 4:15am
Easy - the emergence of the policy of Neoliberalism ( elite economics ) over the past quarter century or so; it minimizes the role of the state and maximizes the private business sector. funesthememorious 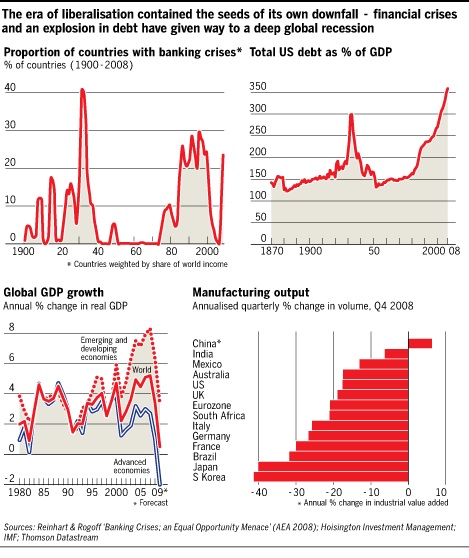 Carmen Reinhart of the University of Maryland and Kenneth Rogoff of Harvard argue that the era of liberalisation was also a time of exceptionally frequent financial crises, surpassed, since 1900, only by the 1930s. It was also an era of massive asset price bubbles. By intervening to keep their exchange rates down and accumulating foreign currency reserves, governments of emerging economies generated huge current account surpluses, which they recycled, together with inflows of private capital, into official capital outflows: between the end of the 1990s and the peak in July 2008, their currency reserves alone rose by $5,300bn.

Meanwhile, inside the US the ratio of household debt to GDP rose from 66 per cent in 1997 to 100 per cent a decade later. Even bigger jumps in household indebtedness occurred in the UK. These surges in household debt were supported, in turn, by highly elastic and innovative financial systems and, in the US, by government programmes.

Throughout, the financial sector innovated ceaselessly. Warren Buffett, the legendary investor, described derivatives as ‘financial weapons of mass destruction’. He was proved at least partly right. In the 2000s, the ‘shadow banking system’ emerged and traditional banking was largely replaced by the originate-and-distribute model of securitisation via constructions such as collateralised debt obligations. This model blew up in 2007.

We are witnessing the deepest, broadest and most dangerous financial crisis since the 1930s. As Profs Reinhart and Rogoff argue in another paper, ‘banking crises are associated with profound declines in output and employment’. This is partly because of overstretched balance sheets: in the US, overall debt reached an all-time peak of just under 350 per cent of GDP – 85 per cent of it private. This was up from just over 160 per cent in 1980.

Among the possible outcomes of this shock are: massive and prolonged fiscal deficits in countries with large external deficits, as they try to sustain demand; a prolonged world recession; a brutal adjustment of the global balance of payments; a collapse of the dollar; soaring inflation; and a resort to protectionism. The transformation will surely go deepest in the financial sector itself. The proposition that sophisticated modern finance was able to transfer risk to those best able to manage it has failed. The paradigm is, instead, that risk has been transferred to those least able to understand it. As Mr Volcker remarked during a speech last April: ‘Simply stated, the bright new financial system – for all its talented participants, for all its rich rewards – has failed the test of the marketplace.’
http://www.creative-i.info/2009/03/12/another-ideological-god-has-f...

Permalink Reply by CWO3ROBBIE on March 28, 2010 at 5:59am
Maricel,
Without a great deal of further study, I don't see any way your question can be answered with a high degree of acuracy.
We can make judgements based on our perceptions, but unless we fully understand, which at this time I do not, the factors used to determine this index, I don't see how we can answer your question. As far as the war on drugs, That is a bogus label. If you really want to stop the adverse socitial effect of drugs, you mearly legalize them.
Larry has listed some of the things that he thinks contribute to the ranking. Which by the way I don't judge as quite as dismal as you seem too. I guess I have most disagreement with Larry on number three. We are responsible for the actions of our government, so I would guess it is the fact that we have failed to elect people to government who have the good of the whole as a higher priority than their own gain.

Permalink Reply by larry kremis on March 28, 2010 at 8:51am
Yes Robbie, I believe marijuana should be legalized but I don't think marijuana is the contributing factor to the drug problem. The main problem is the prescription drugs that are sold in the streets and in the schools.

Permalink Reply by willie on March 28, 2010 at 6:37am
It should be no surprise to the people who know me that I find this pretty easily explained. Religious convictions that keep our people in a kind of dark-ages fog is most certainly to blame for our failure to move forward with the rest of the enlightened world.
To site one example written right here by Larry, teen-aged kids getting pregnant and hiding it from the parents for as long as possible thus failing to gain prenatal care...why would children fear their parents?? Godly wrath? I won't even go into the "paddlings" in school. But if children are raised correctly at home, "paddlings ", in school or at home, are unnecessary.

Permalink Reply by larry kremis on March 28, 2010 at 6:53am
A swat on the ass seemed to work well for my kids. Both daughters got pregnant after they married and my 3 grandchildren live at home with both parents. My son never married.

I absolutely agree with you willie, children need to be raised correctly at home with 2 parents. Both parents need to keep their teens in check and advise them against growing up too quickly. Most teens can't wait for the parents to give them the pink slips on their lives. Many can't wait to have that baby who will give them unconditional love, posslbly the love they didn't get at home. Love your kids, educate them, and keep tight reins on them.

I see no harm in kids fearing the paddle. The paddle's not going to kill them.

Permalink Reply by willie on March 28, 2010 at 7:30am
I agree Larry that the paddle is not going to kill them but... if your child is treated as he should be from birth and that includes (at least for me) a healthy respect for where your rights over the child end, he will not need a paddle in his life. My son sees his childhood as the ideal and can't wait to have a family of his own because he was treated with the utmost respect (from birth) as a fellow human being. Reason was my weapon of choice. He is a well-rounded man with no baggage from a poorly thought-out rearing. The biggest problem I see with paddlings is that they are an easy out for lazy parents. Rather than taking the time to explain to a child the dangers in the bad behavior he is participating in, a quick swat says "Don't ever do this again" without giving a reason. This reinforces lack of thought in the child rather than engaging him in a thought process....always a wrong choice in my mind.
While I totally agree that the best possible world is for a child to be raised by two loving, thoughtful parents, this is not always possible. To believe that a child cannot be raised properly by the one remaining loving thoughtful parent, flies in the face of all I stand up for. It is harder, I grant you that, but is is not an impossible feat. I raised two daughters alone before marrying the father of my son and while I concede that much of their belief system was compromised by the input of care-takers, they still came through with pretty much my core belief system intact because when I did have time with them, I explained why things were right or wrong rather than just smacking their bottom and expecting them to think about it. Physical battering is never an acceptable re-enforcer in my mind. To me, physical violence begets physical violence.

Permalink Reply by larry kremis on March 28, 2010 at 8:47am
Raising children with BOTH parents in the house is so much more advantageous to the child. Men and women think differently and children need to see this growing up in order to understand it better.

A swat on the ass should always be followed up with an explanation as to why, ie the consequences from certain behaviors in addition to a sore butt. Each child has their own personality, time outs work with some, maybe most, start with the timeouts first, use the word no several times. Some kids are more stubborn and defiant than others, spankings are a last resort and usually effective. Nothing wrong with a stubborn child, they usually grow up to be adults of conviction with stick-to-itiveness.