As long time readers of my blogs know, Happy is a Big, Black, Hairy dog who loves water. The muddier, the better. And fall in Doddridge County West Virginia is when the "Fake" lady bugs come out. The first scouts for the plague arrived in the late 80s and evidently sent back signals of encouragement. Cause there are more of them every year. So, with the rain, the fog, the heat, then the cold, it has been a challenging couple months. My RV is dirty. Both inside and outside. Every crevice has bugs hiding there.

Why do I go there? I often ask myself that question. The answer is; for various reasons. My earliest childhood memories are of there. I have lived there on and off all my life. I went to the first grade there. In one corner of the farm is a graveyard with most of my ancesters on my Dads side of the family. My Mother was from the next hollow over. It is a beautiful area. It is mine!!!!

But, Socially, it is almost as alien to me as Turkey and Viet Nam was. It is nothing like it was when I was a kid, a teenager, even a young man. The population is about half what it was then. The people there are mostly isolationists, religious fundimentalists, Republicans, (well, they were Republicans even when I was younger). People used to visit, sit on the porches in the evenings and talk. the kids playing in the yard, field, barn, or woods.

Now there are no kids, 3 in a 10 mile stretch. And nobody visits. They all watch Satellite TV.

I do not get cell phone or internet when there. I drive about 12 miles to get a signal on my air card or cell phone.

When I want to visit with most of the people that I know there; I go to a couple of the graveyards. I see many, many names of people that I remember. Aunts, Uncles, Grandparents, Parents, and thier friends. Some of my friends, but not many. Because most of my generation moved away. It seems that this is what has happened to most of rural America.

So, I haven't been on tbd much . I just read that there was some speculation that I and Merry might have run off together. Nope! I might, but she is in Maine!!!!! I've been to Maine. It's cold there; in July!

One reason, not the only one, but an important one this time, is the Marcellus Shale gas boom. Seems that my farm sits right over the shale. So, a company has bought the rights to drill to the Marcellus. However, it gets very complicated. My Grandparents leased the mineral rights(that includes oil and gas) in 1960. Oil and gas leases stay in existance forever as long as there is any effort at production. The new Company says that they want to drill but they need me to sign a Surface Use Agreement. If I don't, they can do it anyway. But I can tie them up in litigation for years, or until my lawyer, if he/she is on contingent, or if not, until I run out of money to pay him/her.  So we have been in negotiations for the last couple months.

Started out with them giving me a 3 page document to sign, that gave them the right to do anything they wanted to, from now till the end times.

I gave them back a five page document that I had modified that said they couldn't do anything without a pound of papers signed by me, giving them the right to get down on their knees and beg me to even look at my property.  Yesterday I signed papers saying that they can use my property for a Macellus pad,  if they do it within two and one half years and pay me a significant amount of money if they do.  I also own one half of the mineral rights. It gets very complicated and may not ever amount to anything.

Part of the agreement is a confidentiality clause so I can't disclose much more than I have.

It was fun but, by the time they do anything I'll probably be ready for the "HOME".

Friday morning, as it got light, I saw frost. Then as it got lighter I saw more and more, thicker frost. Until I realized that it wasn't frost. It was snow.  That sped up the negotiations. Since I gave up downhill skiing, I don't do snow.

Headed for Atlanta to visit an old friend and a younger friend. The younger is d's.

I write as I travel.

Here is a picture of the RV located at our luxury accomidations for our first night. 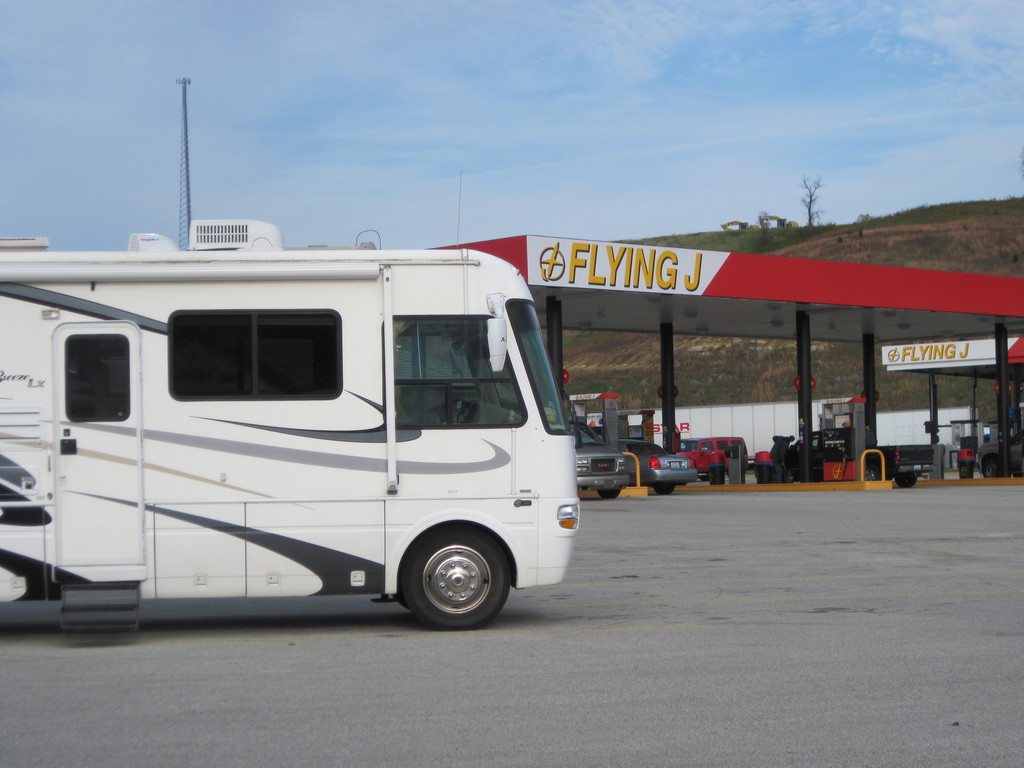 Quinn, Kooner, Tonight Happy, Samantha, and I are in Shreveport, LA.  Should be an easy day tomorrow. Only have about 160 mi to go. Samantha is the girl in my new GPS. She doesn't scold me as much s Nelly did. I banashed Nelly to the Jeep. She is probably back there saying "RECALCULATING" over and over.

I'll put up some pictures when I get settled in at Livingston.

Where ya at now?

Stir, Deez had an emergency in her family and had to go to Birmingham. I think. So, anyway, No peck on the cheek.

Comment by Snagg on October 31, 2011 at 4:03pm
You are wise to flee the snow and ice, Robbie. Just watch out for the zombie infestation in Atlanta when you get there.

Comment by Stir Young on October 30, 2011 at 7:49pm
Glad to read of your adventures again Robbie!  Please give Deez a chaste peck on the cheek from me, when you get to Atlanta!  LOL!