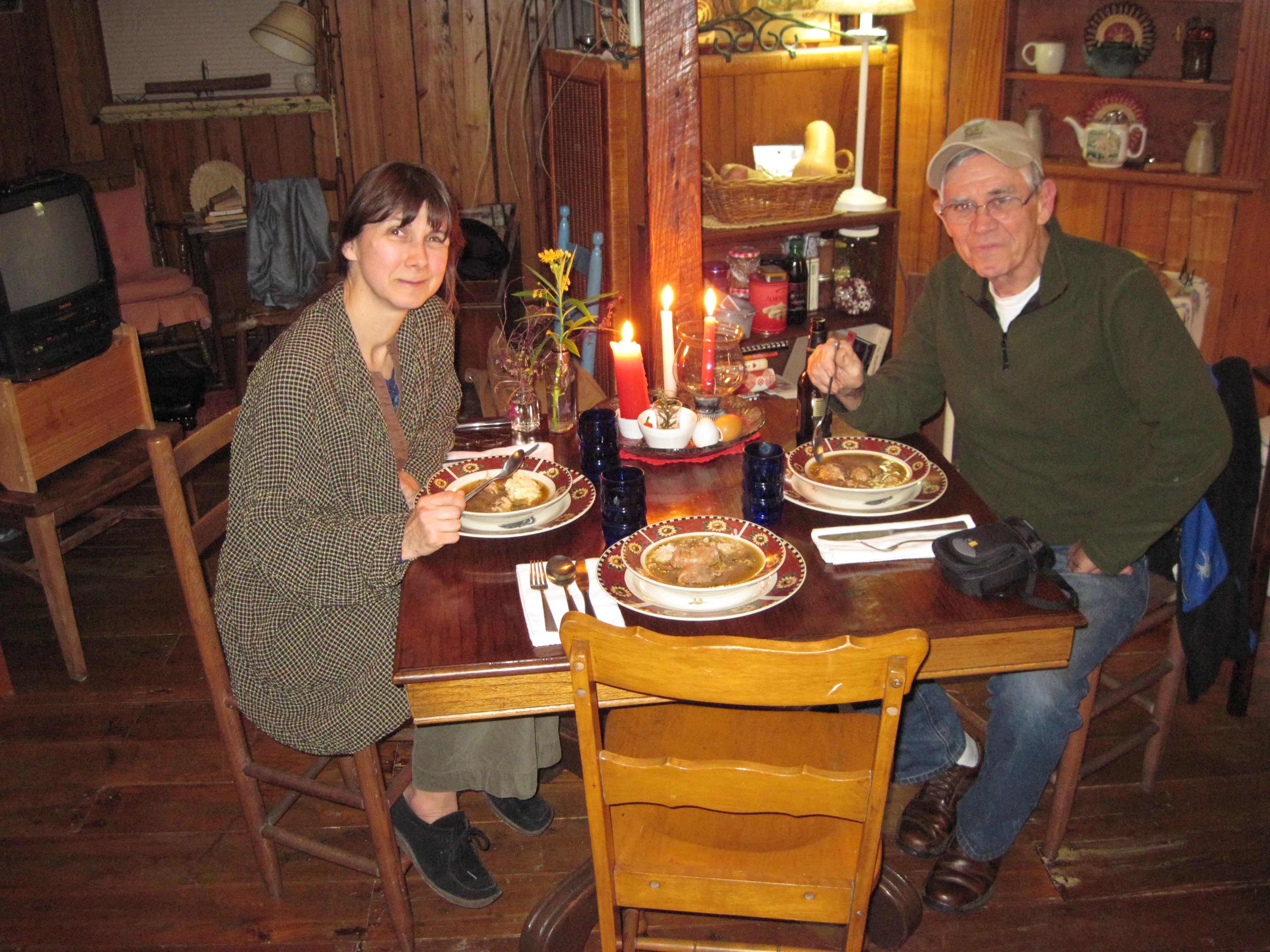 It was still raining this morning so I decided to stay at the Lafayette KOA for another day. The rain stopped by nine am and I took Happy out for the second time this morning. It was reasonably warm, so we walked all around the KOA site. It is pretty large and has a lake that is at least 5 acres. I washed both couch covers and did a few other housekeeping chores. Yes, you can never get away from those. Kathy Arlene called and said that she was going to have Gumbo this evening and would I like to come over and help eat it.
She had another friend coming over and we could have a meal and conversation. I thought that sounded good so I readly accepted. About 1:30 pm I took Happy and we drove to Breaux Bridge to look around. Kathy suggested that I could drive out to the lake and look for alligators and other wildlife, or I could go downtown and get a feeling for the local flavor. Since, I had Happy with me and envisaged what might happen if he met an alligator, I chose the second suggested action. I went downtown Breaux Bridge and visited the local coffee shop. While ordering coffee I noticed the cakes on display . I ask about one and was told it was Hummingbird cake. I had never had, or even heard of, Hummingbird cake so I purchased a piece. It was very large and very good. When I finished the coffee and cake I went to the car to leave. Evidently a funeral or wedding was taking place at the church just down the street. There was a large group of people milling around outside and a police car parked sideways in the middle of the street. I thought maybe I could squeeze between the cars stopped on my side of the street and do a U-Turn to get out of there. Just about that time the elementary school on the next block let out and all at once there were school buses added to the mix. No way out. I relaxed and watched. Life in a small town.
After about 10 minutes things started moving and I was able to make my U-Turn and exit Breaux Bridge. I went back to the RV and fiddled around and took Happy for another poop run.
At about 5:15 I left to go to Kathy's. Got there without incident. She met me at her driveway entrance and we went in to her brother's trailor for a visit. Her brother, Trevor, had just had hip surgery. Since I had hip replacement surgery in Nov. 2008. we could have a discussion about that. Plus, since Trevor lives by himself he enjoyed having someone visit. From there we went on back to Kathy's house and her friend Mark arrived shortly. We had great conversation and a very good meal of homecooked Gumbo. Mark is an interesting guy to talk too. He is a musician and has traveled most of the US and into Canada. I left about 9:00 pm and drove back to the RV park. Tomorrow I will motor on East, trying to keep ahead of the next storm. A cold front came through this eve and it is pretty miserable outside. But, it isn't raining. 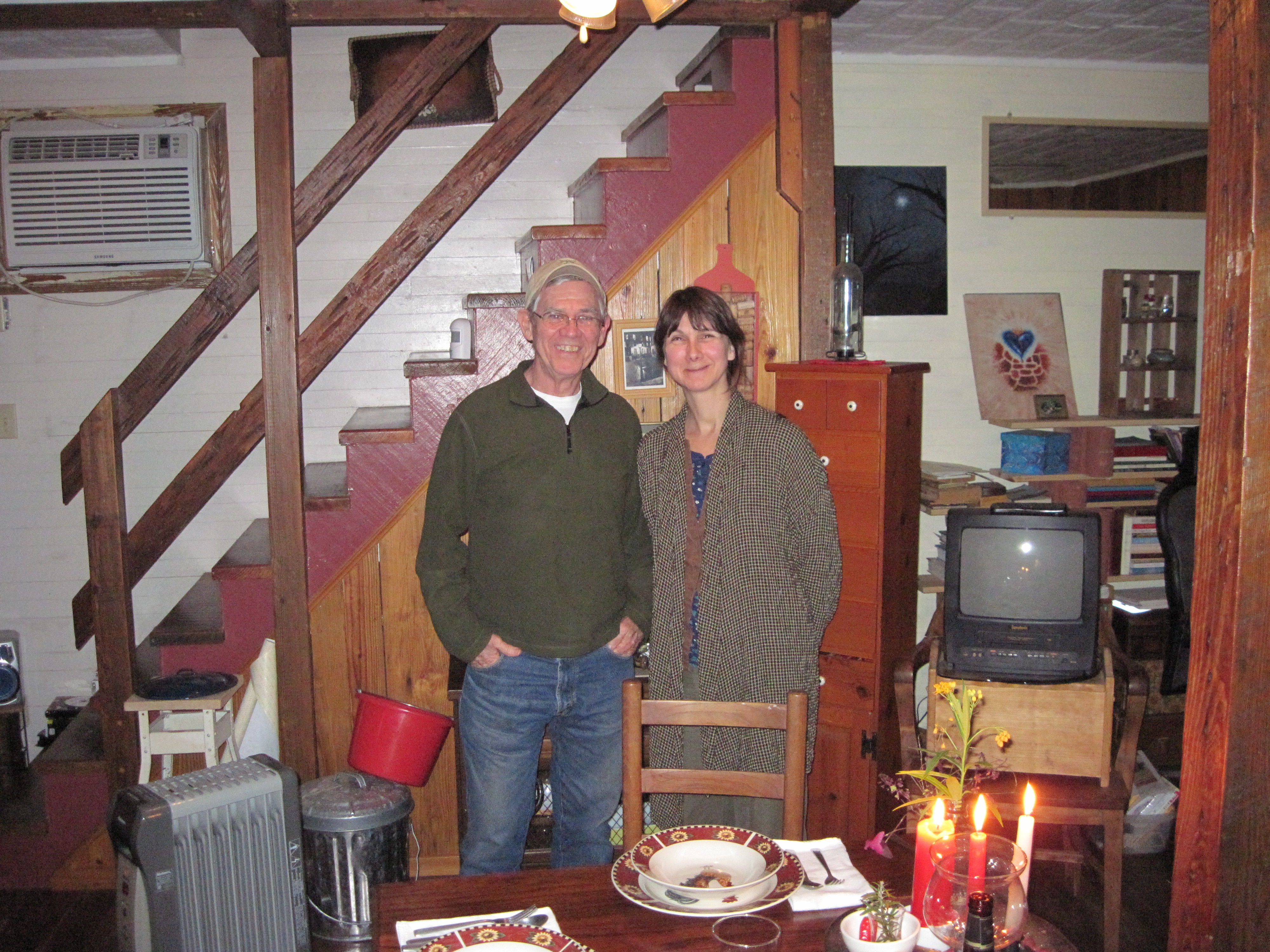 Kathy Arlene and I posing for tbdNing

Comment by Kittycat on December 3, 2009 at 1:19pm
Robbie, I really enjoy your travelogs!! Soooo glad you sidestepped the gators... :) The gumbo looks delicious and it must have been since in the last photo the bowls were empty... lol