Everyone should start carrying $2 bills!
I'm STILL laughing!!
I think we need to quit saving our $2 bills and bring them out in public.
The younger generation doesn't even know they exist!
STORY:
On my way home from work, I stopped at Taco Bell for a quick bite to eat.
I have a $50 bill and a $2 bill. I figure with the $2 bill, I can get something to eat and not have to worry about irritating anyone for trying to break a $50 bill.
Me: 'Hi, I'd like one seven-layer burrito please, to go.' Server: 'That'll be $1.04. Eat in?'
Me: 'No, it's to go.' At this point, I open my billfold and hand him the $2 bill. He looks at it kind of funny.
Server: 'Uh, hang on a sec, I'll be right back.' He goes to talk to his manager, who is still within my earshot.
The following conversation occurs between the two of them:
Server: 'Hey, you ever see a $2 bill?'
Manager: 'No. A what?'
Server: 'A $2 bill. This guy just gave it to me...'
Manager: 'Ask for something else. There's no such thing as a $2 bill.'
Server: 'Yeah, thought so.'
He comes back to me and says, 'We don't take these.
Do you have anything else?'
Me: 'Just this fifty. You don't take $2 bills? Why?
Server: 'I don't know.'
Me: 'See here where it says legal tender?'
Server: 'Yeah.'
Me: 'So, why won't you take it?'
Server: 'Well, hang on a sec.'
He goes back to his manager, who has been watching me like I'm a shoplifter, and says to him, 'He says I have to take it.'
Manager: 'Doesn't he have anything else?'
Server: 'Yeah, a fifty. I'll get it and you can open the safe and get change.
Manager: 'I'm not opening the safe with him in here.'
Server: 'What should I do?'
Manager: 'Tell him to come back later when he has real money.'
Server: 'I can't tell him that! You tell him.'
Manager: 'Just tell him.'
Server: 'No way! This is weird. I'm going in back.
The manager approaches me and says, 'I'm sorry, but we don't take big bills this time of night.'
Me: 'It's only seven o'clock! Well then, here's a two dollar bill.'
Manager: 'We don't take those, either.'
Me: 'Why not?'
Manager: 'I think you know why.'
Me: 'No really, tell me why.'
Manager 'Please leave before I call mall security.'
Me: 'Excuse me?'
Manager: 'Please leave before I call mall security.'
Me: 'What on earth for?'
Manager: 'Please, sir..'
Me: 'Uh, go ahead, call them.'
Manager: 'Would you please just leave?'
Me: 'No.'
Manager: 'Fine -- have it your way then.'
Me: 'Hey, that's Burger King, isn't it?'
At this point, he backs away from me and calls mall security on the phone around the corner. I have two people staring at me from the dining area, and I begin laughing out loud, just for effect.
A few minutes later this 45-year-oldish guy comes in.
Guard: 'Yeah, Mike, what's up?'
Manager (whispering): 'This guy is trying to give me some (pause) funny money.'
Guard: 'No kidding! What?'
Manager: 'Get this. A two dollar bill.'
Guard (incredulous): 'Why would a guy fake a two dollar bill?'
Manager: 'I don't know. He's kinda weird. He says the only other thing he has is a fifty.'
Guard: 'Oh, so the fifty's fake!'
Manager: 'No, the two dollar bill is.'
Guard: 'Why would he fake a two dollar bill?'
Manager : 'I don't know! Can you talk to him, and get him out of here?'
Guard: 'Yeah.'

Security Guard walks over to me and......
Guard: 'Mike here tells me you have some fake bills you're trying to use.'
Me: 'Uh, no.'
Guard: 'Lemme see 'em.'
Me: 'Why?'
Guard: 'Do you want me to get the cops in here?'
At this point I'm ready to say, 'Sure, please!' but I want to eat, so I say, 'I'm just trying to buy a burrito and pay for it with this two dollar bill. I put the bill up near his face, and he flinches like I'm taking a swing at him. He takes the bill turns it over a few times in his hands, and he says,
Guard: 'Hey, Mike, what's wrong with this bill?'
Manager: 'It's fake.'
Guard: 'It doesn't look fake to me.'
Manager: 'But it's a two dollar bill.'
Guard: 'Yeah? '
Manager: 'Well, there's no such thing, is there?'
The security guard and I both look at him like he's an idiot and it dawns on the guy that he has no clue and is an idiot. So, it turns out that my burrito was free, and he threw in a small drink and some of those cinnamon thingies, too.

Made me want to get a whole stack of two dollar bills just to see what happens when I try to buy stuff.
Just think...
those two will be voting soon!!?!
YIKES!!!
Too late, we already have a nation full of them. 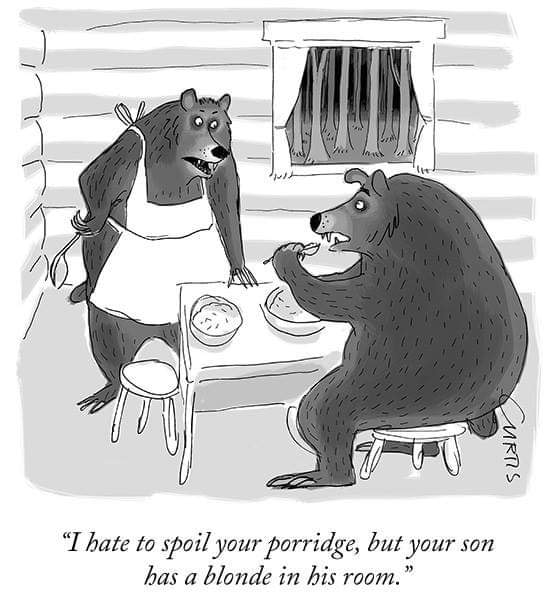 An elderly woman was walking her dog one evening when a young man ran by her and grabbed her purse and took off, a couple across the street ran over to check on her saying the police were called and would be here in a few minutes, the woman smiles and tells the couple that its really no big deal,she carries her old purse to put her dog's poop in it until she gets home to dispose it..imagine the surprise when the thief opens the purse.

A trooper pulls over a priest and immediately smells alcohol on his breath. The next thing he notices is an empty wine bottle lying on th passenger seat. "Have you drinking?" the officer asks. "Just water", says the priest. "Then why do I smell wine?" The priest looks at the bottle and shouts, "Good Lord! He's done it again.

Two blondes are in a river holding fishing poles with the lines in the water. A game warden comes up behind them, taps them on the shoulder and says, "Excuse me, ladies, I'd like to see your fishing licenses."
"We don't have any." replied the first woman.
"Well, if your going to fish, you need fishing licenses." said the game warden.
"But officer," replied the second girl, "we aren't fishing. All we have are magnets at the end of our lines and we're collecting debris off the bottom of the river."
The game warden lifted up the lines and, sure enough, there were horseshoe magnets tied on the end of each line. "Well, I know of no law against it," shrugged the game warden, "take all the debris you want." And with that, the game warden left.
As soon as he was out of sight, the women started laughing hysterically. "What a dumb Fish Cop! Doesn't he know that there are steelheads in this river?!"

An old story goes around that during one Sunday night's service, long after the singing, passing of the collection plate, several prayers, church announcements completed & well into the pastor's sermon, a man "pushed into the back row" of the church, sat listening for several minutes & after a few more minutes, leaned over & asked a man sitting next to him, "How long has has this fellow been preaching?" == "About 30 years, I would think.", said the man, --- "OK, I guess I'll stay to the end. He's likely just about finished.", said the latecomer.......

A Policeman Was Training Three Blondes To Become Detectives.
A Policeman was drilling 3 blondes, who were training to become detectives. To test their skills in recognizing a suspect, he shows the 1st blonde a picture for 5 seconds and then hides it. "This is your suspect, how would you recognize him?" The first blonde answers, "That's easy, we'll catch him fast because he only has one eye." The policeman says "Well...Uh.. that's because the picture shows his profile."
Slightly flustered by this ridiculous response, he flashes the picture for 5 seconds at the second blonde and asked her "This is your suspect, how would you recognize him?" The second blonde giggles, flips her hair and says "Ha! He'd be easy to catch because he only has one ear!" The policeman angrily responds, "What's the matter with you two? Of course only one eye and ear are showing because it's a picture of his profile! Is that the best answer you can come up with?"
Extremely frustrated at this point, he shows the picture to the third blonde and in a very testy voice asks "This is your suspect, how would you recognize him?" He adds quickly "....think hard before giving a stupid answer." The Blonde looks at the picture intently for a moment and says "HMMMM... the suspect is wearing contact lenses."
The policeman is surprised and speechless, because he really doesn't know himself if the suspect wears contacts or not. "Well, that is a good answer.. wait here for a few minutes while I check his file, and I'll get back to you on that." He leaves the room and goes to his office, checks the suspect's file in his computer and comes back with a beaming smile on his face.
"WoW! I can't believe it...it's TRUE! The suspect does in fact wear contacts lenses. Good work!
How were you able to make such an astute observation?" "That's easy," the blonde replied. "He can't wear glasses because he only has one eye and one ear!"

A woman went to the emergency room, where she was seen by a young new doctor. After about 3 minutes in the examination room, the doctor told her she was pregnant.
She burst out of the room and ran down the corridor screaming.
An older doctor stopped her and asked what the problem was... after listening to her story, he calmed her down and sat her in another room.
Then the doctor marched down the hallway to the first doctor's room.
"What wrong with you?" he demanded. This woman is 63 years old, she has two grown children and several grandchildren, and you told her she was pregnant?!!"
The new doctor continued to write on his clipboard and without looking up said:
"Does she still have the hiccups?"