a place for challenging debates, playful dialogues, or friendly bantering. We strive to be free of censorship and to respect the notion that it is the multiple and opposing viewpoints which characterize our coveted freedom.

The speed of light 1 Reply

Einstein's theory suggests nothing is faster.But some cosmologists suggest the Universe expanded faster then the speed of light.Black holes however, and super massive black holes, suggest to me that terminal velocity is finite.And how about the…Continue

Describe yourself in one word or picture.Continue

A Quantum Universe- a slightly different perspective on reality 2 Replies

Physics : A Quantum universe?We look at the objects and materials of the world as bounded and solid. The calls for change in the area of physics are  perhaps the most radical of all the movements in the scientific disciplines, questioning the nature…Continue

Astronomical Theory of Climate Change The tilt of the earth relative to its plane of travel about the sun is what causes seasons. The hemisphere "pointing toward" the sun is in summer, while the opposite hemisphere is in winter. The earth makes…Continue

BeiYin: There is obviously a discrepancy between concepts and reality. This causes disappointment, frustration and a lot of stress in most humans. The high number of diseases, suicides and depressions are the result. Spiritual concepts about Love,…Continue

Who should help the poor? Churches or Government? 16 Replies

I have noticed that during the past decade there seems to be a move by the religious community to discredit Government help for the poor.During the Bush Administration there was a "Faith Based Initiative" where Bush tried very hard to get the…Continue

Aren't They Supposed to Heal the Sick? 4 Replies

Here’s the situation: you have a friend who has been told by a visiting nurse that there “may be evidence” of head lice, but she wasn’t sure, so your friend should consult her PC to be sure. Your friend calls and makes an appointment; this PC is…Continue

Who are society's scapegoats these days? 9 Replies

Who are society's scapegoats?(photos and/or text responses welcome) Continue

Where do you hope to retire? 6 Replies

Would you leave the country to retire? If so, where?Would you work part time in another job after you retire?Do you worry about your care giving in the future? especially since the Baby Boomers outnumbers subsequent generations. According to current…Continue

I watched SICKO with my (Med Ethics) class last week and was highly disturbed by the testimonies. One has to be really careful what one puts in health history. If you haven't already watched it, try to do so. It is riveting. …Continue

You need to be a member of Intrepid Minds to add comments!


so simple to read; so difficult to achieve

CARRYING CAPACITY
A man said to the universe
"Sir, I exist!"
"However," replied the universe,
"The fact has not created in me
A sense of obligation."
- Stephen Crane, 1899

So spoke the poet, at century's end;
And in those dour days when schools displayed the world,
"Warts and all," to their reluctant learners,
These lines thrust through the layers of wishfulness,
Forming the minds that later found them to be true.
All that is past, now.
Original sin, then mere personal ego,
Open to the shafts of consciousness,
Now flourishes as an ego of the tribe
Whose battle cry (which none dare question) is
"Justice" - But hear the poet's shade
A tribe said to the universe,
"Sir, we exist!"
"So I see," said the universe,
"But your multitude creates in me
No feeling of obligation.
"Need creates right, you say? Your need, your right?
Have you forgot we're married?
Humanity and universe - Holy, indissoluble pair!
Nothing you can do escapes my vigilant response.
"Dam my rivers and I'll salt your crops;
Cut my trees and I'll flood your plains.
Kill �pests' and, by God, you'll get a silent spring!
Go ahead - save every last baby's life!
I'll starve the lot of them later,
When they can savor to the full
The exquisite justice of truth's retribution.
Wrench from my earth those exponential powers
No wobbling Willie should e'er be trusted with
Do this, and a million masks of envy shall create
A hell of blackmail and tribal wars
From which civilization will never recover.
"Don't speak to me of shortage. My world is vast
And has more than enough - for no more than enough.
There is a shortage of nothing, save will and wisdom;
But there is a longage of people.

"Hubris - that was the Greeks' word for what ails you.
Pride fueled the pyres of tragedy
Which died (some say) with Shakespeare.
O, incredible delusion! That potency should have no limits!
�We believe no evil �til the evil's done' -
Witness the deserts' march across the earth,
Spawned and nourished by men who whine,
�Abnormal weather.'
Nearly as absurd as crying, �Abnormal universe!'...
But I suppose you'll be saying that next.
"Ravish capacity reap consequences.
Man claims the first a duty and calls what follows
Tragedy.
Insult ... Backlash. Not even the universe can break
This primal link. Who, then, has the power
To put an end to tragedy?

Only those who recognize hubris in themselves."

Hey, I wanna go to one of these places even though I'm not much of a drinker... lol 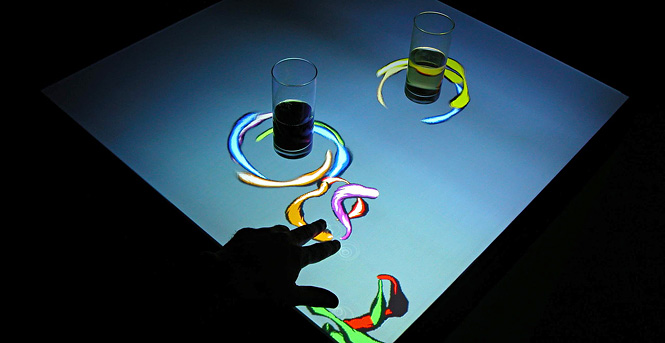 The Interactive Bar Tables are an interactive installation for cafe-like social venues, and an early example of a multi-touch surface in interactive art. The project forms the natural habitat of a species of creatures that exhibits a unique pattern of social behavior. When someone touches the surface of their virtual terrarium, these digital organisms react with playful curiosity. They flock to drinking glasses placed in their vicinity like hungry sharks, and teem around everything that enters their world. But have no fear: they don’t bite. If you catch one with your fingers, it will follow your movements, and you can send it on in any direction and from table to table. Left alone, the creatures descend back into the depths of their digital environment. In this way, the colorful organisms become part of a communicative game involving the users of the Interactive Bar Tables, whereby the flow of communication extends throughout the individual terrariums and creates an interconnection among the participants. http://www.flong.com/projects/tables/ 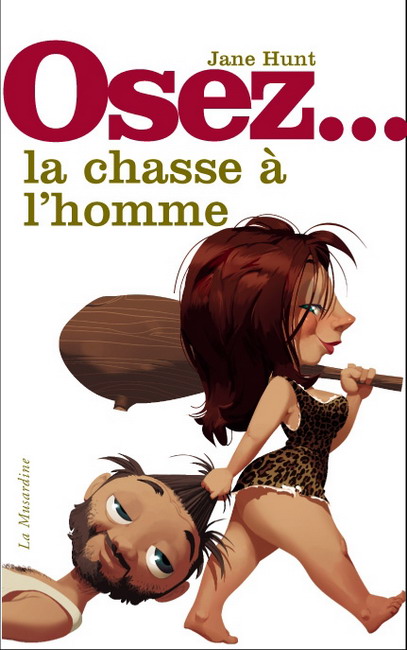 Comment by Apposite on May 23, 2011 at 11:35pm
Some interesting laws of nature there Maricel. Some a bit idealistic but all the same easier to say than live by; that said you can't expect others to live by them either.

Comment by Maricel Evasco on May 23, 2011 at 8:40pm
The Road To Success is Always Under Construction
by Author Unknown

Life is not no much a matter of position as of disposition.
The best vitamin for making friends, B-1.
If you don't care where you're going any road will get you there.
A pint of example is worth a gallon of advice.
He who throws mud loses ground.
A smile is an inexpensive way to improve your looks.
Ideas won't work unless you do.
The future is purchased by the present.
One thing you can't recycle is wasted time.
Triumph is just "umph" added to try.
He who forgives ends the quarrel.
Children need more models than critics.
Frogs have it easy, They can eat what bugs them.
The pursuit of happiness is the chase of a lifetime.
If the going gets easy you may be going downhill.
Jumping to conclusions can be bad exercise.
The best labor saving device is doing it tomorrow.
A turtle makes progress when it sticks its neck out.
Failure is the path of least persistence.
Patience is counting down without blasting off.
Have a backbone not a wishbone.
Some folks won't look up until they are flat on their backs.
If you want your dreams to come true, don't oversleep.
Friend - One who knows all about you and likes you just the same.
Birds have bills too and they keep on singing.
A good example is the best sermon.
The Ten Commandments are not multiple choice.
Well done! is better than, Well said!
Minds are like parachutes - they function only when open.
If you can laugh at it then you can live with it.
People don't fail, they give up.
When looking for faults use a mirror, not a telescope.
Smile, it takes only 13 muscles; A frown takes 64.
Kindness, a language deaf people can hear and blind can see.
A small leak can sink a great ship.
You can't direct the wind, but you can adjust your sails.
We lie loudest when we lie to ourselves.
Tact is the ability to see others as they wish to be seen.
A friend walks in when everyone else walks out.
If you must cry over spilled milk then please try to condense it.

To erase your digital footprint, go into your tools menu or safety menu and browse privately. Log out at the end of your session, and delete your cookies.  These are not programs, but instructions

protect yourself on the Internet Explorer browser: http://bit.ly/ghhqMY

protect yourself on the Firefox browser: http://bit.ly/gksBuQ

protect yourself with the Safari browser: http://bit.ly/dZdZhu

protect yourself with the Google Chrome browser: http://bit.ly/fdHqff 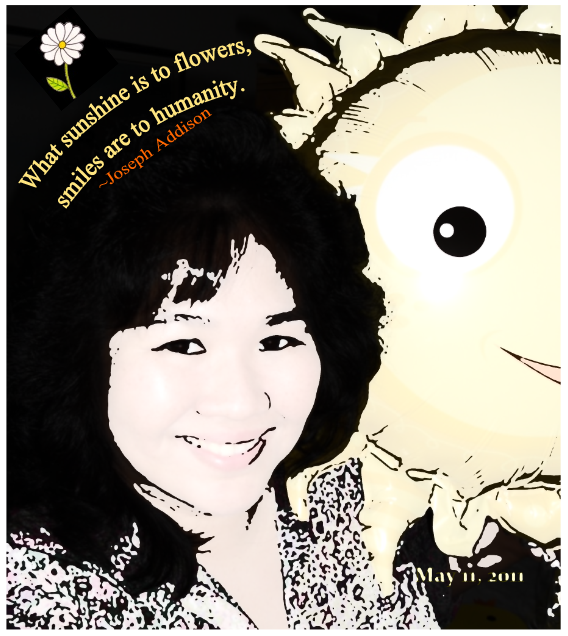