My liberal friend Pam and I are a perfect example of the class warfare currently being waged in America between the 'haves' and the 'have nots.' Also known as 'the war against the rich,' or, in a nutshell, socialism.

Though Pam and I are lifelong friends, we couldn't be more different. Pam is the quintessential liberal, quick to espouse views that show America in a bad light. Sarah Palin is evil, Bush is bad and anyone (like myself) that doesn't base their decisions on feelings is, well, just plain uncompassionate. End of story. I, on the other hand, am a traditional, conservative Christian.

Though conservatives have yet to be included under the leftist's much vaunted 'tolerance' and 'multicultural' umbrellas, Pam has decided that she will tolerate her renegade friend, as long as that friend doesn't publicly air any conservative views. Which is becoming a problem for our friendship.

Pam is the product of government schools and a culture that ignores merit in favor of any perceived underdog or victim. She is the proud owner of a Masters Degree, which, according to her, validates all of her leftist views - regardless of any facts to the contrary. And its not her fault that, at the ripe age of 57, she has yet to pay off the student loans that paid for her education.

Both Pam and I are the end result of the decisions we have made over the course of our lives. Pam's choices have resulted in her absolute refusal to participate in capitalism, or our free market system. Instead, she survives on a government check, feeling it is her due. And like most who receive something for nothing, she hates the one whose largesse she has chosen to accept. Kinda like all those countries who get aid from America and hate us for it. Hey, no one likes to be acknowledged as being subservient.

Fortunately for Pam, her leftists illusions allow her to maintain the moral high ground. Unlike her capitalist friend, who has never asked for or received dime one from the government. I am considered one of the evil 'rich.' Pam graciously ignores this fact, at least until she needs another loan.

Pam maintains the romantic illusion of being a struggling, misunderstood artist. She exists on a higher plane than Joe Six pack and Susy Homemaker. She is 'sensitive' and totally in tune with Mother Earth, victims of capitalism, and all creature great and small. That my tax dollars allow her this freedom is one of those inconvenient facts that Pam has learned to compartmentalize. Meaning she has chosen to ignore (or demonize) any facts that don't align with her vision of herself.

Like most leftists, Pam believes that life is a zero sum game. If someone has a big slice of the pie, that automatically means that some poor unfortunate has to do with a smaller slice. And all rich people are only rich because they made their money off the backs of those less fortunate.

This mind set, while comforting, is not conducive to material success. Which is OK with Pam, as she has spent her whole life eschewing the almighty dollar, choosing instead to allow others, like her 'rich' friend and financially stable family members the favor of periodically bailing her out financially. Her only concession to reality.

Ever since Obama was elected president, my friendship with Pam has become strained. Though politics was never a part of our friendship in the past, it has now become a factor. Pam apparently feels that Obama's socialist agenda is the best thing that ever happened to the Oppressive State of America. And since she knows that everyone feels this way, she has no qualms parroting the Dem's sound bite of the day as fact.

Since I know Obama didn't really cut taxes by $800 billion, it rankles somewhat that Pam believes it. Pam also believes that the government take over of the private sector is long overdue. And that Obama's take over of the health care system is the only way to ensure social justice.

I don't blame Pam for her desire for social justice. After all, she just had both hips replaced, courtesy Uncle Sam. And she sees no reason why other misunderstood victims shouldn't have access to the same free lunch. But her attitude is starting to rankle.

Though I am aware of the politically viable yet destructive effect of pitting one class of Americans against another class, I find I am becoming an active participant. I'm starting to resent my friend. I resent her cavalier, tax-payer funded attitude. I am starting to take umbrage at her assumption that her liberal views are the only valid views and any dissent or challenge to her world view is either racist and/or lacking in compassion.

I'm starting to resent the fact that people like myself, dirty little capitalists, are required to support deadbeats who have decided to live off the system. All the while, spitting in the eye of those that provide the means. (Sorry, Pam.)

Having been allowed the luxury of basing her life on feelings instead of being forced to make a living, Pam now takes great offense should I dare mention any of these inconvenient realities. She will allow no dissent. Our friendship has become political.

Pam wastes no time analyzing my weekly articles as being motivated solely by hate and 'lacking in compassion.' She has adopted the proven tactic of continually forcing me to proving a negative. And I just don't want to do that anymore, especially since I have lost respect for her.

With great regret, I realize Pam has become like so many of her fellow leftists. Willing to defend to the death leftists opinions (that are formed by others) and dismissing out of hand any facts to the contrary. If I don't agree with her, why, there must be something wrong with me. This attitude is not conducive to friendship.

Lifelong friendships that have weathered the test of time are rare and should be cherished. That our current political climate has ended this friendship is regrettable. But this case is not unique. Across the nation, friends are pitted against friends, families are dividing along partisan lines and Americans are being encouraged to resent anyone percieved as having more than their (fair)share of the pie.

I fear this will continue and become more pervasive under our current president. Raising the distinct possibility of America's downfall coming from within. The 'have nots' and victims are consolidating their premier position at the public trough, forcing others to pay for their ever evolving version of social justice. And considering that fully half of Americans now pay no federal income taxes yet still vote, the chances of changing this through the ballot box are becoming slimmer.

I already miss Pam. Our friendship was very important to me and I am saddened that today's political climate makes it impossible for good friends to agree to disagree. But if the choice is between actively enabling her views by keeping silent or fighting to keep America from turning into a nation of useful idiots, I'll choose the latter. Without regret.

Permalink Reply by Nancy Morgan on April 24, 2010 at 3:18am
Bob,
I believe you are mistaken. Just because the only stories the media reports are about dishonest business owners doesn't mean that the majority of them are dishonest.

Permalink Reply by funesthememorious on April 20, 2010 at 4:00pm
Love your tags : idiot, obama, socialism, useful. The intellectual angle is always conducive to swaying people over to your point of view. By the way comrade, don't forget Earth Day in another 2 days! 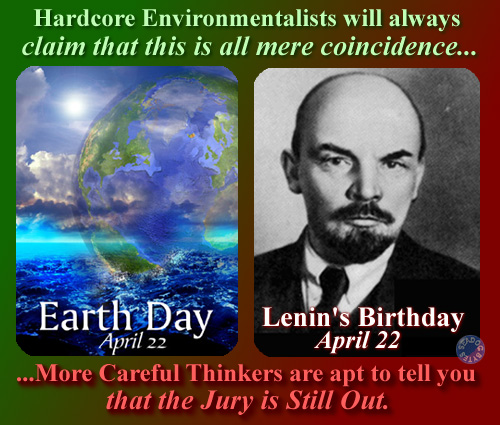 Thanks for reminding me!

Permalink Reply by Dallas on April 20, 2010 at 11:22pm
Is it me, or does that Earth Day poster have a transparent mega-boob practically filling the frame?

(13The Pharisees challenged him, “Here you are, appearing as your own witness; your testimony is not valid.” 14Jesus answered, “Even if I testify on my own behalf, my testimony is valid, for I know where I came from and where I am going. But you have no idea where I come from or where I am going. 15 You judge by human standards; I pass judgment on no one.)

Perhaps you need to rethink your perception of Christianity and being a follower of Christ.
Differentiating liberals from conservatives or Democrats from Republicans or "haves" from "have nots" in determining soundness of character, mind, and spirit is passing judgment using 'human' standards.

Permalink Reply by Nancy Morgan on April 24, 2010 at 3:21am
I never agreed to play by the rules the left has instituted that label all opinions as judgements.

Permalink Reply by Maricel Evasco on April 24, 2010 at 2:34pm
Then may I ask what passing judgment to you means?
I am neither left nor right. Actually, I can't stand either having polarized and fragmented this country. (United, we fall.)

Permalink Reply by Dallas on April 20, 2010 at 11:09pm
"...Unlike her capitalist friend, who has never asked for or received dime one from the government..."

Have you ever:
driven on the Interstate Highway System?
flown through an FAA-regulated airport?
attended a public school?
eaten meat purchased in a grocery store?
taken any prescription drugs? (your own, that is)

Permalink Reply by Nancy Morgan on April 24, 2010 at 3:23am
You are under the mistaken impression that these services come from the government. You're wrong. They come from 'we the people.' They are services, not charity. Get real