we're all afraid of the Government, and with good reason. All it does is steal from the have's and give's to the have not's. Which I'm assuming people like you TeeBubbaDee...

With no partisan points to make, Obama did nothing more than accelerate the Bush agenda.

We haven't had a change in agenda from one administration to the next since Kennedy..

And the warning's of Eisenhour about the military industrial complex running our government covertly no matter who we elect, has become a brutal reality. We are indeed in a time of Tyranny, and Martial Law. it is time to prepare if you've no intentions of remaining a slave...

well Quinn, if your not afraid of a federal government that has recently empowered itself to kill anyone, imprison anyone, or take anything it wants from anyone without due process. Then your very naive, and have no understanding of history, and what happens when a government grants itself those powers..

no, people are preparing for an armed conflict with the Federal government at a level not seen in America since the Civil and Revolutionary War..

State and Local governments are making preparations as well, not to mention un-organized militia's are arming up. The signs are everywhere, and very obvious if you look. If this Government doesn't turn itself around and start obeying the Constitution soon, My bet is States and local governments will begin kicking the fed's out physically, and violently if necessary. 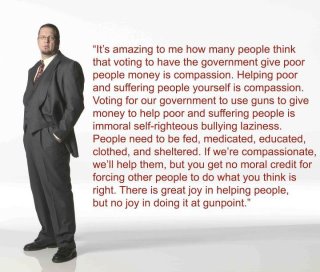 I'm assuming you meant to say..."Which I'm assuming people ARE like you TeeBubbaDee". And yes tool, I am a have not. I'm on SSI disability for a bunch of different health reasons. Would I rather work and not get that whopping check every month for less than seven hundred bucks a month. Damn right I would.  But since I worked all my life and paid into social security, I don't really feel like I'm stealing anything from anybody.

every one doing well, what you been doing JayLee// Spock told me that logic and practical information do not seem to apply here.

They are dumbing down America for a reason. They can screw the people easier.

If you went to school recentally you would find out what they are teaching.

People are bitching about the rich, they had better be watching their middle class ass.

Hi Tool, So, you think we may be on the way to a military coup? Could you please enlighten us to how you have knowledge of how the military, especialy the high ranking military, think? Do you think that their oath of office no longer matters?

What military experience do you have?

darroll, Are you a teacher? Are you rich? What do you do for a living?

Tool, how many of your workers have you laid off so that you don't have to pay social security taxes for them?

I thought that Mr. Tool did not employ actual human workers.

A long time ago he stated that he had employees, but he was going to lay most of them off due to the payroll tax.