The cycle of life 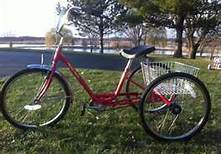 Here is my Miami Sun tricycle, which I take for about a hour spin each day at my Florida retirement complex. Over the past few years, some disabilities have hampered my prior one hour walks and the comfort of a regular bicycle seat. So I did as many do at an older age and switched to a trike. There are a number of senior citizens who join me each day as we exercise in the bright sunshine. In my childhood photos there is one of me as a three year old riding a trike. So I thought to myself, I have come full circle. In the meantime I had become an accomplished hiker and sportsman, but those pursuits are only memories now.  I still do play a decent game of golf a couple of times a week.

Recently, I have had a series of digestive problems, which included one operation and having to regiment myself to a diet that is easy to digest. I have learned to enjoy tofu, brown rice and broiled fish as much as I used to love a good steak and french fries. Accordingly, I thought back to my childhood day, and again in my photo album is a photo of my mother feeding me on a high chair. All my foods were soft and easy to digest. Unfortunately, later in life I ate my share of fast foods and imbibed some alcoholic beverages, perhaps some times to excess. Those days are behind me as my body will tell me if the eat the wrong foods.  It is not a pleasant message.

I also have accepted the fact that I am not going to mow my lawn anymore or get up on the roof and make repairs. As a home owner, I built additions to my house, did considerable remodeling, replaced the roof a couple of times and painted the place off of high ladders. But I can't do that anymore, no more that I could as a child, as my parents took care of my needs.

As we age, we go through this cycle and accept our new limitations grudgingly. But I like my bike and am also comfortable with who I am. I will accept the declining years and make adjustment as needed until the cycle is over.  Meanwhile I can still bog from time to time.

It was six years ago that I went  back to my high school reunion.  It was back in Rhode Island in a city I left when I was 18 and never returned.  I remember that 28 class mates were already dead, some my old friends.  Others were walking with canes, had physical problems or talking about the grand-kids and not not themselves. None were planning much for the future.  As an old expression goes, "The Class of '57 had it's dreams."  Now these dreams are only aspirations  that may or may not have come true, while they plan their exit strategy.

I'm having trouble with this one.  And yes, I know the cycle of life, it however, just doesn't seem fair.  Like, I just got use to being able to do stuff that I couldn't do before, and now, I can't do as much of that stuff that I would like to, like to be and do.

My partner wanted me to make New Year's resolutions for 2013.  Other then being an odd year, more or less, it is the 50th anniversary of my high school graduation.  50 years to look back on, and that is one of the problems, how many years I can, look back on.

Like, not one of the 600 hundred plus students that graduated with me has done much of anything, and that is another problem, out of 600 not much has been done by anyone, except lived their lives, like I have.

I remember the night, I remember it was hot and not that pleasant.  I remember that the speeches and comments were not as sharp and uplifting as I thought the event would bring.  And then I remember that with months i was typing my semester term paper on Little Doritt that had to be delivered that afternoon I heard in the dorm hall voices saying he was shoot.  Much was changed then as to what I thought would happen and what I would being doing, and yes, with some regret.

Comment by MGDJ on February 23, 2013 at 6:40pm
not even a fried penut butter and jelly sandwich?!?
I had a deep fried twinkie in Gatlinburg and it was amazing. I probably will have to change my diet someday too...
http://thointheknow.wordpress.com/2011/08/09/deep-fried-foods-taken...

I  have found that a gluten free diet is best, with small meals taken at more frequent intervals.  My diet avoids all meat except for white chicken and is generous with fish and has a lot of non-gassy vegetables and fruits. Going gluten free has also helped a lot.  I eat nothing fried and no deserts, unless they are of the sugar free variety.  I do drink an occasional glass of wine.  Again, I am reminded of the days of my youth when we lived on a subsistence farm, where my father grew a large vegetable garden, raised chickens.  Fruits were plentiful from nearby woods, especially blueberries. We lived 5 miles from the ocean and seafood was very cheap or free from relatives who fished.  It was on our diet at least two times a week.

I think I'd like to have a trike too. I'm glad that you're taking care of yourself. I don't know if you can handle eating pineapple or not but that has an enzyme in it that is supposed to help older people break down their food and digest it better.

It is great that most of us get to do the things we do in life.  If you look at the handicapped, they are stuck in the first and last stages for great periods of their lives.  So even if we think that the decline of old age is a burden, feel confident that there are those among us that never experience the middle section of life.