I've always dreamed of being a writer. When I was in Junior & Senior High I carried notebooks almost everywhere I went and wrote constantly. Those days seem like they were eons ago. Last year after having unexpected foot surgery and being housebound for 14 weeks, I started writing again for the first time since I graduated from HS in 1987. This is one of the first pieces I wrote. Its unedited -- almost all of my pieces are. Constructive criticism would be appreciated. 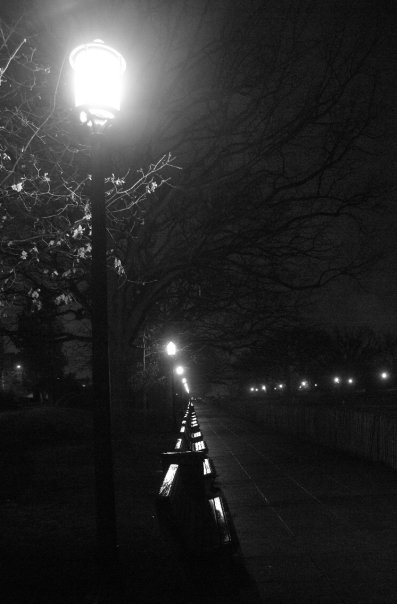 They kissed for what seemed an eternity under the lamp post, dewy mist enveloping them. They’d first said hello at this exact spot many suns ago how fitting that they should return to say good-bye. But how to do so? How to let go of the years spent, the children raised, the miles traveled, the homes moved, the days of sunshine and the nights of chilly silence. The ups and downs, ins and outs, it ain’t all roses moments that come to any marriage.

They had survived deployments, wars, conflicts, his call to duty, dedication to the uniform and all it stood for. Survived the almost insufferable separations. Her fear that he wasn’t coming home and his that he’d never see her face or those of their children again. Somehow they’d made it through the daily reports of more casualties, more air raids, bombings, ambushes and sleepless nights wondering. Babies conceived on leave and birthed while his feet were on foreign soil. Temptations abroad and home overcome by the knowledge of something that was too meaningful, too important to risk for temporary solace grabbed indiscriminately in the darkness. They’d overcome the longing that cut to the bone, the emptiness that could not be filled until they embraced on the oil slicked tarmac of an airfield in the middle of wherever. Moments when the world stood still and everything except the two ceased to exist.

Letters written from dark, muddy foxholes to the symphony of landmines, gun fire and mortar shells erupting incessantly and read by tear-filled eyes behind closed doors until tear stained and dog-earred. Letters held onto as if made of gold and locked away in lavender scented memory chest so that the sacrifices made for the life that was to come could never be forgotten. Letters pulled out after words that stung shot back and forth like enemy fire in the midst of combat just so they would remember the times when they would’ve given anything just to breathe the same air.

Here in Meridian Hill Park during the halcyon days of a summer long gone but never forgotten, he had dared to sit beside her. His heart beating wildly inside of him, sweat forming on his brow. Wondering how to make his lips form and speak what would become the most beautiful word in the world to him, her name. Hands trembling, mind racing, soul hoping that this was the right bench and the right woman. Praying that she would become his destiny and his happily ever after.

She appeared calm, serene. peaceful. But inside she rethought her dress, her hair, her shoes, her purse. Was the shade of lipstick right? Did her perfume smell as sweet as it had in the department store? Was he really as handsome as he seemed in his uniform. Would he like her, want her, take her to be his lawfully wedded? Would the butterflies in her stomach settle. Would she find her voice in time to speak? Would he be her dream come true?

He had, she had, they had. For so very long. And now was it really to be over? How do you say good-bye to a lifetime? The unexpected illness, the tests, diagnosis, second, third, fifth opinions. The finality. The acceptance. Til’ death do we…

But tonight none of that mattered. They were here together and once again the world stood still and all else ceased to exist and slowly they began to dance as they had so many nights before. Here where the dreams of youth had been spun like silk. When they were immortal and life spread out before them like the oceans he would cross to fight for freedom: hers, his, others unknown. Slow dancing in the park after dark to the strains of a phantom band, a smooth, soulful crooner at the helm guiding them to a place where everything was bright and beautiful. And they would forever be together. Death had been defeated and sent on its way hopefully never to darken their doorstep again.

One more dance, one more kiss, just one more visit to that moment in time when they could reach out and touch eternity, pluck it like a sweet plum ripe and warming in the sun. When joy flowed like peach nectar and smelled as sweet as Stargazer lilies.

And so they danced, suspended in time, by the light of the lamppost in Meridian Hill Park after dark.