Here's another one I did last Fall. Many of my pieces are inspired by photographs taken by my friends. I look at the photos and the stories just come in most cases. Thats what happened with this one and Meridian Hill. I'll try to include the photos when I can. As always most of my pieces are unedited (I suck at editing) so there are probably a few typos, mispellings and omissions. Try not to hold it against me. 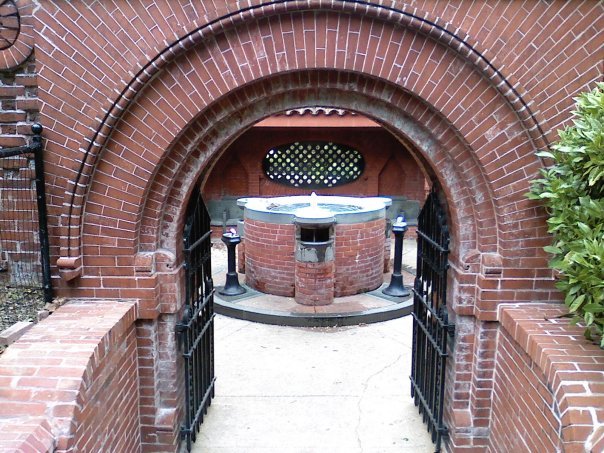 He stood on the street at the entrance to the brick courtyard and stared into its inner sanctum. From where he stood he could see an elaborate fountain and for reasons he could not explain he was drawn to it. As he walked down the stairs and through the gated brick archway he wondered how long the room had been there, he’d walked this way a thousand times and had never noticed it before.

The room itself was circular with a high glass domed ceiling. Stone benches were built into the red brick walls which were formed into patterns reminiscent of something you would see in an Indian temple. At intervals around the room were windows fitted with metal lattice work covers. Birds flew or sat perched calmly in the upper recesses of the walls. Trees and plants in oversized stone pots were placed around the parameters of the structure. In the background there was the gentle gurgling of the fountain.

As he walked towards the fountain Ryan felt the stress he had been under melt away. The closer he came to the font the more he felt as though a tremendous weight were being lifted from him and in its place a cloak of peace and calm was descending. When he reached the fountain he steeped up on its base to peer into the water. The edges of surrounding the basin was covered in Byzantine style mosaic tile work. Blues, greens, yellows, golds. Rich tones such as his eyes had never seen before, the tiles sparkled in the sunlight like jewels. The water in the basin was crystal clear and on the bottom of the basin was more tile work forming the face of woman who seemed eerily familiar and almost human. The closer he looked the more real the face seemed, in fact she appeared not only to be breathing but to lifting her head towards him. He stood mesmerized unable to believe what he was seeing. The face lifted itself from the basin until it floated just below the surface of the water. Eyes of the deepest lapis lazuli stared up at him framed by alabaster skin and flowing red hair that seemed so real he felt as though he could reach out and run his fingers through its silken strands. Like the tiles it too shimmered and sparkled in the sunlight.

The face was the most beautiful he had ever seen and he could not for the life of him take his eyes off of it. It was as if his feet were made of stone, for he could not move away from were he stood. The eyes blinked and then her mouth slowly curved into a smile. It was as if she were beckoning him. He lifted a hand and slowly reached towards her, just wanting to touch her face to see if she were real or just a figment of his overworked mind. The water was cool to the touch as his finger tip slowly connected to it, carefully he dipped it beneath the surface to touch her cheek. To his shock and surprise he felt flesh.

In that moment there was a loud clanging, Ryan spun around to see the black gates at the entrance slamming shut. The room darkened and the walls changed from red brick to slate grey stone. The intricate lattice work covers at the windows morphed into blackened iron bars and the lush plants and trees withered into thorn covered vines. The lovely songbirds became ominous looking birds of prey.

He turned around slowly taking in all that surrounded him, not believing his eyes. What was happening? What was going on? He turned back to the fountain, the beautiful fountain that he had just gazed upon had completely and utterly vanished. In its place stood a hulking black cauldron filled with a noxious looking substance, the stench of which make him sick to his stomach to nearly the point of vomiting. Floating just above the surface where once the face of what had surely been an angel had been was now the decayed remains of something that could never have been human. Putrid, bloated, grey-green flesh, totally eaten away in some parts, stringy, matted hair, cracked ashen lips and completely white eyeballs that were pulled away from sunken sockets. The sight of this curdled his stomach and before he could stop himself a torrent of vomit violently erupted from him nearly covering one side of the cauldron.

And now from the murky depths of the enormous black kettle came a long thin withered claw like hand. Reaching for him, on its ring finger a shining gold ring in which was set a round, glowing lapis lazuli stone. With it rose the specter that lay in the black ooze in of the cauldron. Terrified, Ryan backed away hastily, slipped in the vomit and fell to the cold hard floor. Behind him the decayed body rose steadily. Looking back over his shoulder and seeing this he scrambled trying to lift himself up off of the floor but found it nearly impossible to get his footing amidst the slipperiness of his own vomit. So instead he crawled rapidly towards the gates and upon reaching them pulled himself up on his feet. He shook them but to no avail for they were sealed shut.

A voice came from behind him, in horror he turned and saw a veiled, slime covered corpse wearing what appeared to be an old wedding dressmaking its way towards him. The flesh had completely fallen away from its face and where the eyes had once been were now empty sockets. What appeared to be horns protruded from its skull.

The voice came again, as the corpse moved closer still to him. This time he noticed that when it opened its mouth to speak his name it bared a set of insidious looking fangs. In horror he pushed himself against the gates again and again but in vain for they would not budge so much as an inch.

The cold, slimy hand planted itself onto his shoulder, he shuddered as it tightened its grip and he felt the presence of the face close to his, moving towards his neck. Instinctively he jumped and screamed.

He opened his eyes and upon seeing the lapis lazuli ring he scrambled to get away from it, falling out of bed.

“Babes, what the hell is wrong with you” his fiancée Julianne asked looking at him as if he had truly gone mad. She climbed over to his side of the bed and peered down at him.

He lay on his back, partially propped on his elbows, his body drenched in sweat, face completely devoid of color, shaking like a leaf. His heart was pounding and his body trembled. He looked up at Jules. Her long, red hair falling freely over her naked, alabaster skin. Her deep blue eyes staring down at him quizzically.

“Babes I don’t know what’s wrong with you but you need to pull it together. We have a million things to do today. We gotta go pick out the flowers, finalize the menu with caterer, get you fitted for your tux, drop off the deposits for the band and the photographer blah..blah..blah..”

He stared at her, saw her mouth moving but couldn’t hear what she was saying as she continued to drone on and on and on as she had been for the past few months. He wondered to himself who this person was and what she had done with his sweet, sexy, cool, laid-back Jules. Since he had proposed almost everything about her had changed.

He thought about his dream, how nightmarish and vivid it had been.

“Ryan are you listening to me??”