Let's go together in Sochi 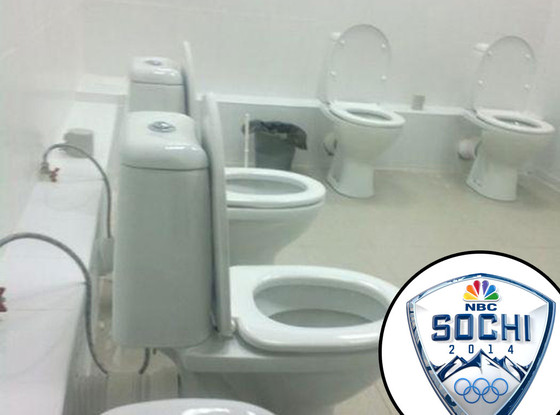 With all the publicity about Sochi toilets, I thought I would relate some of my own experiences with toilet facilities and the like in Russia.

In the past, I have had occasion to visit Russia twice, once for two weeks on a bus tour from Finland, returning to Germany and visiting Moscow. The tour bus had about 40 passengers of mixed sex and ages. The initial stop was at the border, where all our passports were confiscated, and we were directed to a mostly bare, cinder-block room, containing a scattering of chairs, but nowhere near numbering 40. We would be there approximately 6 hours for no apparent reason. One of the first to use the single rest room that was provided was a young lady, who came out proclaiming there was no seat on the toilet and no toilet paper. One of the group warned her, “You were lucky there was a toilet there and not just a hole in the ground. And you will be lucky to ever see a scrap of toilet paper for the rest of the trip." Later, we stopped at a road-side rest facility that had a shack, indicating “Men" and "Women.” The conditions inside the “outhouse” were so deplorable the entire bus group walked to a grove of trees further down the road, were we used nature's accommodations. Toilets weren't much better in most hotels or public buildings.  At one of the restaurants the toilets were closed so we went behind the building.  Local diners were urinating, some of the men with rifles strapped on.  No concealed weapons for these people.  We noticed empty hypodermic syringes laying around.  WTF!

The second trip crossed the vast continent on the Trans-Siberian RR. The basic toilet, one per car, was a straight shot to the tracks. God! And you wouldn't want to sit on the seat for all the tea in China. Ugh! Hotels, once you got past the frontier into the vast lands of Siberia, lacked the basics. There was no hot water in Siberia, except for winter. Too bad we where there in summer. The shower had a plain pipe, with no shower head and the toilet lacked a seat. There was nothing in the room resembling toilet paper. However, sitting down to a nice Russian dinner, each diner was presented with one-eight of a napkin for use during the meal. I must say, we never had a meal where vodka was not served as a table beverage. It was an easy choice over the brown water.

But this was Russia, a country that has recovered from 70 years of communism. The people were wonderful, the scenery was terrific, the history deep and the experience unforgettable. From Norgard, the ancient capital, to Lake Baikal, Russia is a magnificent country. You just have to get used to going to the toilet using their communal customs.  I guess communism is still alive and flourishing in the bathroom.

When I asked our guide what was the number one peeve he had about Americans traveling through Russia  -- of course, we had consumed our fill of vodka at the time -- he stated, "That they always compare everything they see in Russia to America and conclude things are better there."

This is the number one complaint of most countries.  Americans traveling behave like we just travel to see how good the old USA is compared to other places in the world.

We are Americans, and no, not enough said.  Overall, we are an ignorant people, ignorant in our own ignorance of what the rest of the world is like and how others live in it...and  overall, its to the better mostly because we can't change the rest of the world, that they will have to do themselves.

What we should do is appreciate and respect what we have, and do what we can to preserve what it is we do have, even though that isn't the American way nor what has made America great among the nations and people of the world.   In the past we strove to improve, innovate and seek opportunity and demand it and not just wait to it was given.  Or at least that is what we once were a proud, prosperous...and smug and a little silly about ourselves.

Now we don't live that way, or that is what it seems to be happening.  We don't believe in what we are doing and we don't seem to believe or trust in others to do it with us.  Once we were neither left or right we were Americans, living a dream...and now...too much of a nightmare.

In other parts of the world it still is but a dream, but one they can see on YouTube....