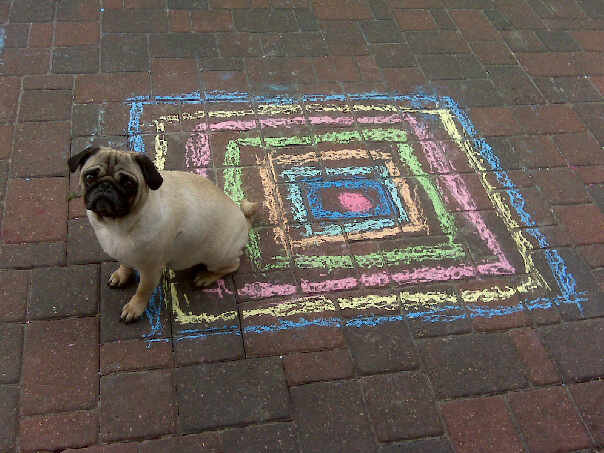 I know the noun "stalker" has come to mean something, I dunno....negative? But really if you look at the dictionary definition of the root word, stalk (hey I sort of made a plant pun there with root and stalk), well it is a downright appealing word. I will not bore you with the word by word definition, but it includes the following: stealthily, haughty, deliberate, persistent, and stiff--stiff can be good, right? Anyways, "stalk" and "stalker" are even more appealing when you are able to ignore the other descriptives like: menacing, sinister, unlawful, and my personal favorite, derangement.
And speaking of "stalk" and "stalker," I think this would be a great name for a movie, kinda like Dumb and Dumber.

Stalking however it may come into ones life can be freaking cute as hell (http://www.blueq.com/shop/114-catId.117440644_114-productId.0.html) when the persistent and deranged perpetrator is a pug. Seriously. This is my favorite thing about my dog, Iris Iona Bond. I love this animal more than my own hair color. More than my kickass Adidas Bounce black and hot pink cross trainers. More than chocolate chips stuck on a spoonful of peanut butter. OK, maybe not, but you get the idea. I soon learned that after her first vet visit, when Dr. Cruzen explained that pugs are "Velcro dogs," that he was trying to warn me. "Velcro dog" is vetspeak for "psycho killer" (quest que cest.)

Dr Cruzen should have his own show, I swear to gawd. He is like the Mr. Rogers of vets. Sits on the floor and kisses the animals on the mouth and baby talks to them while interspersing copious verbal notes to his young teenage assistants who don't even know what shorthand is but can write in text language like "fixt anl glndz b4 cutg clwz," but I digress.

So for the first, maybe....year and a half I'd say, I thought it was cute when Iris would follow me around like a shadow but more like a shadow with lots of little teeth that are clamped to your pant leg and as you walk forcing you to slightly drag them around. I delighted in her little trick of climbing on my back to hold me down while scratching at the back of my head, growling slightly if I moved. Or breathed too deeply. Or had a thought that was too loud. I know...C-R-E-E-P-Y.

Then one day I was sitting, chillaxin, reading, and looked down to glance upon the warm, fat ball of canine at my feet only to find that she was gazing back up at me, transfixed on my face, glaring into my eyes, nostrils flaring slightly as she heaved quietly. I knew in that moment, that she was saying "I love you, but if I had opposable thumbs, I'd kill you. I'd kill you, cut you up and put you in the deep freeze." It was very puts-the-lotion-on-its-skin. It was only then that I could really see how one could come to enjoy having a stalker. I became aware in an instant that even though they pretend not to, celebrities kind of like it when strangers dig thru their garbage and masturbate in their bushes--I mean who wouldn't?

Oh, I need to make a clarification, or suffer the consequences, but when I referred to my pug as "fat" above, I really mean "large boned", "with winter coat", and "retaining water".