Researchers from the Wildlife Conservation Society and other groups have created a map of the world’s corals and their exposure to stress factors, including high temperatures, ultra-violet radiation, weather systems, sedimentation, as well as stress-reducing factors such as temperature variability and tidal dynamics. 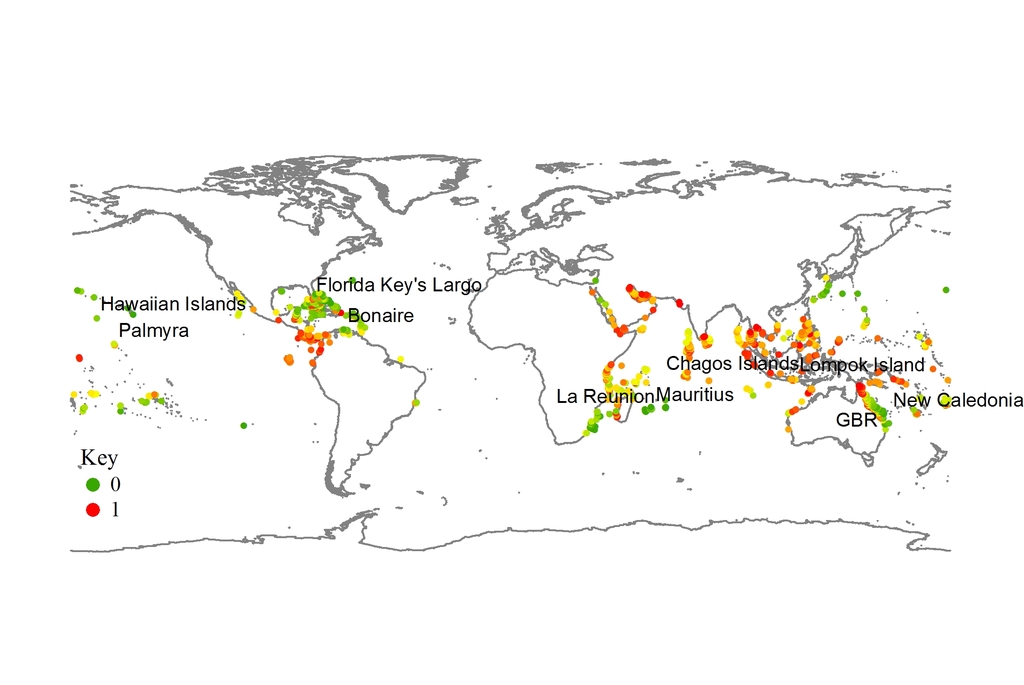 The study, say the authors, will help to conserve some of the world’s most important coral reefs by identifying reef systems where biodiversity is high and stress is low, ecosystems where management has the best chance of success.

The paper appears online in journal PLoS One. The authors include: Joseph M. Maina of WCS and a doctoral student at Macquarie University, Sydney, Australia; Timothy R. McClanahan of WCS; Valentijn Venus of Netherlands Institute for Geo-Information Science and Earth Observation; Mebrahtu Ateweberhan of the University of Warwick; and Joshua Madin of Macquarie University.

“Coral reefs around the globe are under pressure from a variety of factors such as higher temperatures, sedimentation, and human-related activities such as fishing and coastal development,” said Joseph M. Maina, WCS conservationist and lead author on the study. “The key to effectively identifying where conservation efforts are most likely to succeed is finding reefs where high biodiversity and low stress intersect.”

Using a wide array of publicly available data sets from satellites and a branch of mathematics known as fuzzy logic, which can handle incomplete data on coral physiology and coral-environment interactions, the researchers grouped the world’s tropical coral reef systems into clusters based on the sum of their stress exposure grades and the factors that reinforce and reduce these stresses.

The second cluster— including the Caribbean, Great Barrier Reef, Central Pacific, Polynesia, and the Western Indian Ocean—contained regions with moderate to high rates of exposure as well as high rates of reducing factors, such as large tides and temperature variability.

Overall, stress factors such as surface temperature, ultra-violet radiation, and doldrums were the most significant factors, ones that ecosystem management has no control over. What is controllable is the mitigation of human impacts that reinforce radiation stress and where managers decide to locate their protected areas.

“When radiation stress and high fishing are combined, the reefs have little chance of surviving climate change disturbances because they both work against the survival of corals that are the foundation of the coral reef ecosystem,” said Dr. Tim McClanahan, WCS Senior Conservationist and head of the society’s coral reef research and conservation program.

The authors recommend that the study results be used to formulate management strategies that would include activities such as fishing restrictions, the management of watersheds through improved agricultural practices, and reforestation of coastal watersheds that play a role in healthy coral systems.

“The study provides marine park and ecosystem managers with a plan for spatially managing the effectiveness of conservation and sustainability,” said Dr. Caleb McClennen, director of the Wildlife Conservation Society’s Marine Program. “The information will help formulate more effective strategies to protect corals from climate change and lead to improved management of reef systems globally.”

You need to be a member of Planet Earth to add comments!

Useful only if they get off their asses and actually use this vital and disturbing information...constructively, would be the operative word!