This group is still up I see, so will add March to the discussions and see what happens.  I miss it here.

A beautiful March day and a month of wearing the green.  :-)

I saw yuor name flash by Thallygurrl and felt the loving mojo lite up inside.

Ah DD I love you, am hoping to get back in the game soon.  Have been away way too long.  Have a Monday filled with love and laughter my friend.

The ides of March. march 15th, Shakespeer play,Roman calender, Ceasur ignored the soothsayer warning to beware The Ides of March and was assinated on that day.

Caesar:
Who is it in the * press that calls on me?
I hear a tongue shriller than all the music
Cry "Caesar!" Speak, Caesar is turn'd to hear.

Soothsayer:
Beware the ides of March.

Caesar:
What man is that?

Brutus:
A soothsayer bids you beware the ides of March.

..There was a dictator named Ceasar

to his peril he ignored the soothsayer.

As Brutus conspired with the Senators

Ceasar moaned on the gruond

as they mobbed and dispatched him.

No one took the blame, tho he lie dead just the same-

there was no reason to cry treason!

I miss it here too Thally. I am not able to get here much anymore but I think about it and miss the good folks and the good times.

A happy Saturday to all who come this way.  It is snowing outside and I am in for the duration. RRC if you happen to come this way again soon, I am going to be driving to KC the first weekend in May for a class reunion...Lynn tells me you are not too far from the highway on the way so am considering dropping by when my plans are firmed up.

Everyone, have a day filled with love and laughter

ahhh clasic March 22 degrees for a high a cuople of days ago...Tomorrow 53 degrees!!!

HURAY! Boy-Howdy do I need to air the wood smoke uot of the huose. 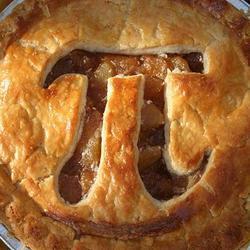 Happy Pi Day to you, Aggie