Laughter is the best medicine

I Even if there is nothing to laugh about, laugh on credit. ~Author Unknown

I'M IN THE WRONG DEPARTMENT

Working on my team of merchandisers last week, we had the assignment of resetting the feminine hygiene section. I'll be the first to admit I don't know these products well. I'm not just talking…Continue

Our federal government has announced the formation of a needed and long overdue cabinet agency: the Department of Lost and Found. (DLF.org,). There has been an epidemic of epic proportions that has…Continue

In an unprecedented act two days ago, President Obama declared war on Denmark citing how Haagendazs ice cream has caused serious problems of increasing obesity and girth.  The President feels…Continue

What you are about to read really happened.  This is one of the most bizarre events in the annals of science. I was about to make scrambled eggs for breakfast this past weekend. Upon cracking…Continue

You need to be a member of Laughter is the best medicine to add comments!

Students in an advanced Biology class were taking their mid-term exam. The last question was, 'Name seven advantages of Mother's Milk,' worth 70 points or none at all. One student, in particular, was hard put to think of seven advantages. He wrote:

1.) It is perfect formula for the child.
2.) It provides immunity against several diseases.
3.) It is always the right temperature.
4.) It is inexpensive.
5.) It bonds the child to mother, and vice versa.
6.) It is always available as needed.

And then, the student was stuck. Finally, in desperation, just before the bell indicating the end of the test rang, he wrote...

If you yelled for 8 years, 7 months and 6 days,
you would have produced enough sound energy to heat one
cup of coffee.
(Hardly seems worth it)

If you fart consistently for 6 years and 9 months, enough
gas is produced to create the energy of an atomic bomb.
(Now that's more like it)

Banging your head against a wall uses 150 calories an hour.
(Still can't get over that pig thing)
(Don't try this at home...maybe at work?)

Humans and dolphins are the only species that
have sex for pleasure.
(Is that why Flipper was always smiling?)

The strongest muscle in the body is the tongue.
(Hmmmmmmmmm........)

The ant can lift 50 times its own weight, can pull 30 times
its own weight and always falls over on its right side when intoxicated.
(From drinking little bottles of...?)
(Did taxpayers pay for this research??)

Polar bears are left handed.
(Who knew....? Who cares? How'd they find out, did they ask them?)

The flea can jump 350 times its body length.
It's like a human jumping the length of a football field.

A cockroach will live nine days without it's head, before
it starves to death.
(Creepy)

The male praying mantis cannot copulate while its
head is attached to its body. The female initiates sex
by ripping the male's head off.
(Honey, I'm home. What the....)

Some lions mate over 50 times a day.
(In my next life I still want to be a pig ...
quality over quantity)

Butterflies taste with their feet.
(Oh, Gee) (That's almost as bad as catfish)

An ostrich's eye is bigger than it's brain.
(I know some people like that.)

Starfish don't have brains.
(I know some people like that too.) 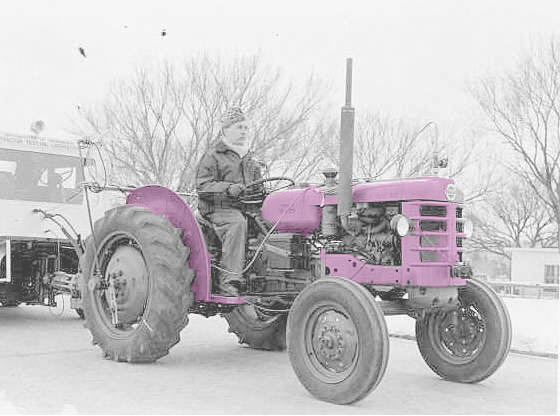 Have you seen a pink 1958 Volvo tractor?


A gynecologist had become fed up with malpractice insurance and HMO
paperwork, and was burned out. Hoping to try another career where
skillful hands would be beneficial, he decided to become a mechanic.

He went to the local technical college, signed up for evening classes,
attended diligently, and learned all he could.

When the time of the practical exam approached, the gynecologist
prepared carefully for weeks, and completed the exam with tremendous
skill. When the results came back, he was surprised to find that he had

obtained a score of 150%. Fearing an error, he called the Instructor, saying,

"I don't want to appear ungrateful for such an outstanding result, but I

wonder if there is an error in the grade?"

"The instructor said, "During the exam, you took the engine apart perfectly,

which was worth 50% of the total mark. You put the engine back together again

perfectly, which is also worth 50% of the mark."

After a pause, the instructor added, "I gave you an extra 50% because you did it
all through the muffler, which I've never seen it done like that in my entire career".


A lawyer and a senior citizen are sitting next to each other on a long flight.

The lawyer is thinking that seniors are so dumb that he could get one over on them easy.

So the lawyer asks if the senior would like to play a fun game.

The senior is tired and just wants to take a nap, so he politely declines and tries to catch a few winks.

This catches the senior's attention and to keep the lawyer quiet, he agrees to play the game.

The lawyer asks the first question. 'What's the distance from the Earth to the Moon?'

The senior doesn't say a word, but reaches into his pocket, pulls out a five-dollar bill, and hands it to the lawyer.

Now it's the senior's turn. He asks the lawyer, 'What goes up a hill with three legs, and comes down with four?'

The lawyer uses his laptop and searches all references he could find on the Net.

He sends e-mails to all the smart friends he knows; all to no avail.
After an hour of searching, he finally gives up.

He wakes the senior and hands him $500. The senior pockets the $500 and goes right back to sleep.

The lawyer is going nuts not knowing the answer. He wakes the senior up and asks, 'Well, so what goes up a hill with three legs and comes
down with four?'

The senior reaches into his pocket, hands the lawyer $5 and goes back to sleep.

Comment by cynthia Hunter on June 28, 2010 at 9:26am
ROSES & HANGING BASKETS
A teenage granddaughter
comes downstairs for her date
with this see-through blouse on and no bra.
Her grandmother just pitched a fit,
telling her not to dare go out like that!
The teenager tells her
'Loosen up Grams.
These are modern times.
You gotta let your rose buds show!'
and out she goes.
The next day the teenager comes down stairs,
and the grandmother is sitting there with no top on.
The teenager wants to die.
She explains to her grandmother
that she has friends coming over
and that it is just not appropriate...
The grandmother says,
'Loosen up,
Sweetie.
If you can show off your rose buds,
then I can display my hanging baskets.

Happy Gardening.
(This is too funny not to share!)

Comment by metub4 on April 3, 2010 at 6:44am
Interpretations of nature from junior high, high school, and college test papers and essays submitted to science and health teachers (spelling errors preserved)....

"To collect fumes of sulphur, hold a deacon over a flame in a test tube"

"When you smell an oderless gas, it is probably carbon monoxide"

"Three kinds of blood vessels are arteries, vanes and caterpillars."

"Blood flows down one leg and up the other."

"Respiration is composed of two acts, first inspiration, and then expectoration."

"The moon is a planet just like the earth, only it is even deader."

"Artifical insemination is when the farmer does it to the cow instead of the bull."

"Dew is formed on leaves when the sun shines down on them and makes them perspire."

"A super-saturated solution is one that holds more than it can hold."

"Mushrooms always grow in damp places and so they look like umbrellas."

"The pistol of a flower is its only protections agenst insects."

"The alimentary canal is located in the northern part of Indiana."

"The tides are a fight between the Earth and moon. All water tends towards the moon, because there is no water in the moon, and nature abhors a vacuum. I forget where the sun joins in this fight."

"A fossil is an extinct animal. The older it is, the more extinct it is."

"Germinate: To become a naturalized German."

"Liter: A nest of young puppies."

"Magnet: Something you find crawling all over a dead cat."

"Momentum: What you give a person when they are going away."

"Planet: A body of Earth surrounded by sky."

"Vacumm: A large, empty space where the pope lives."

"Before giving a blood transfusion, find out if the blood is affirmative or negative."

"To remove dust from the eye, pull the eye down over the nose."

"For a nosebleed: Put the nose much lower then the body until the heart stops."

"For drowning: Climb on top of the person and move up and down to make artifical perspiration."

"For fainting: Rub the person's chest or, if a lady, rub her arm above the hand instead. Or put the head between the knees of the nearest medical doctor."

"For dog bite: put the dog away for sevral days. If he has not recovered, then kill it."

"For asphyxiation: Apply artificial respiration until the patient is dead."

"For head cold: use an agonizer to spray the nose untill it drops in your throat."

"To keep milk from turning sour: Keep it in the cow."