Being "of an age," most of us remember when it was VERY difficult to be out and proud gay. If it was difficult for our generation, how daunting must it have been for the generations before us?

Do any of you have stories of a “bachelor Uncle,”  “maiden Aunt,” or other relative whom you knew in your gut was “different,” but who was seldom discussed in your home? (Of course, you can change the name.) 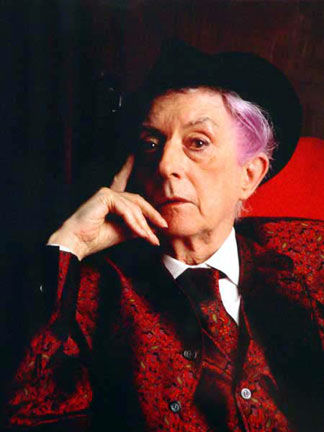 My mother was raised in Washington State. Her nuclear family split their time between the family home in Everett, Washington, and summer homes on a tiny island in the San Juan chain. When I was about 8, we went to visit my mother's brother and his family who still lived on "The Island."

It was a wonderful place to ramble, and all the cousins were allowed to roam the fields and beaches at will. On one of our adventures, I learned of my mother's, sister-in-law's, sister, "Aunt Mary," who lived in a cabin she had built herself. My cousins and their friends, who were normally very straight-forward, acted oddly about Aunt Mary...they whispered to each other, with much tittering, elbowing, and obvious levity. It made me wonder what kind of a person Aunt Mary must be.

I knew the instant I met her that Aunt Mary was gay...and at that time, I wasn't even sure what gay was. She was a tall, strong, handsome woman, dressed in pleated wool trousers and a woolrich wool shirt. Her wheat-colored hair was thick and cut in a short bob. She stood erect and moved with a manish grace. She had been digging in the garden, and she smudged her face with dirt when she pushed her hair back off her forehead. Her smile was open and bright.

There was a short exchange of pleasantries. When I introduced myself, she gave me a big hug and laughed when she realized she'd left hands prints on me.

The next day, the cousins were excited to get Aunt Mary a birthday gift. I wanted to chip in too, I liked her that much. Ideas were bandied about. I wanted to get her a new trowel or a bulb planter...something she would use and enjoy...but my ideas were summarily dismissed. Suddenly one of my female cousins came up with the "perfect" gift. They would buy Aunt Mary the frilliest apron they could find.

I got the chills.

I knew that wasn't right. I protested strongly, but I was a stranger in a close knit family and I was out voted. It made me sick to my stomach watching the girls pick out a white eyelet, organza apron, which they wrapped carefully, giggling and whispering all the while.

I will NEVER forget the look on Aunt Mary's face the next day when she opened that gift.

She had obviously been pleased to receive something. I got the feeling it wasn't a usual happening. Aunt Mary had admired the wrapping, and when she removed it, folded it carefully, smoothing the paper to lie flat with both hands.

She beamed like a little girl as she opened the box.

When she saw the outrageously frilly apron, her beautiful smile cracked like old leather. She tried so hard not to show her hurt and dismay. It brought tears to my eyes when she patted the apron and said with a trembling voice, "OH, how lovely! This is much too nice to wear right now. I'll save it for when I have guests..."

She put the lid back on the box and turned away to put it on the sideboard. I walked over and took her hand...

She was a wonderful person...I didn't get to know her well, but she was always loving and kind in my experience. Needless to say, those cousins were never high on my popularity chart. I haven't spoken to any of them for many years.

I love you, DD. How crystal clear those images are...the visual and, even clearer, the emotional.

"I felt the loneyness in his huose, but cuoldnt think how to fix it." Those are the thoughts of a beautiful mind from a huge and loving heart.

I hope that your great great uncle finally received the comfort and love that he longed for, just as I hope my Aunt Mary did. I never bought the whole afterlife thing until my experience with past lives...Now I feel certain that, at the very least, what they may have lacked in this life will be given in another. There simply must be a balance in the long run...

Oh, lo siento por las lágrimas de tu tía, Loren. But very happy that Tia Celia got to see you "con las mujeres" and doing well. It must have put her heart at rest.

Although it would have been ideal that Lupita could have been recognized and accepted entirely by your family, it is a wonderful thing that she was acknowledged in some way.

Sending up prayers that Celia and Lupita are living together somewhere in absolute bliss...

My paternal cousin, who is a few years older than I, always struck me as different.

I remember as a youth noticing his fastidiousness and his particular sense of style...when I was wearing frayed bell bottoms, no brassiere, and a tank top; he was wearing plaid bermuda shorts, a tucked in color-coordinated "golf" style shirt, and a belt. He always seemed so particular...everything in his world was "just so." While I was busy divesting myself of material things; he was acquiring things: a Rolls Royce that had belonged to my grandparents, antique jade snuff boxes, persian rugs...

He loved music and the arts, as I did, but his taste was more conservative. I liked the German expressionists and the Beatles, he liked the Dutch masters and Bach.

As a very small child, I thought he was a Republican.

Shortly thereafter, I realized he was gay.

Our extended family is not close. Still, as years went on, I wondered why no one spoke about what was so very obvious to me. He never had a girlfriend. No talk of marriage and children. Not the slightest bit interested in classically "male" pursuits, he loved antiques and high-end designer clothing and opera and fine wines and extravagant soirees. He became a lawyer to fund his interests. His home was magnificent--out of the pages of Interior Design magazine--but he lived alone.

His parents talked about their other children and their successes constantly, but not him and his.

Eventually, he moved to Europe. Then he all but disappeared from the radar.

There was a tinge of sadness, emptiness, and isolation to it all.

Several years ago, I heard the words, "your cousin has been living with AIDS for 20 years," from my uncle. Although it was not said aloud, it was indicated that he had not contracted HIV/AIDS through transfusion, or shared needles.

Happily, my uncle, now well into his 80s, began to visit my cousin in Europe. I don't think he has ever openly acknowledged that his son is gay, but at least he has embraced him in some important ways. Some of his siblings...not so much.

We got in touch for the first time in 35 years shortly after I heard of his illness. Happily he is still doing miraculously well and is being studied as an inactive carrier.

Permalink Reply by belle054 on April 27, 2011 at 7:05pm
My mother and her 5 siblings have always been very close.  She is gone now but the rest all remain and still get together frequently.  While I was growing up, now and then the name "Jimmy" would come up.  He was their cousin and the sisters all really got along with him.  I didn't know much about him except that when his name was mentioned, everyone whispered.  Later as a teen, I was finally told that he was gay but still not given much info about him.  Not until I was probably in my 30s did I find out that his father was very hard on him and never accepted his orientation.  I never met him.  Even though they all talked fondly about him, I always got the impression no one went around him very much.  I think that's very sad but I do think it helped my mother to accept my son's orientation when he came out.

Permalink Reply by Angharad on April 27, 2011 at 9:22pm
Yes, sad particularly because there seemed to be so much affection for him, which says that your second cousin "Jimmy" was probably a lovely man. I'm sure he would be gratified to know, however, that being the person he was helped your son in some way. From my experience, there is little sadder than being rejected by a parent or grandparent.

Permalink Reply by belle054 on April 28, 2011 at 4:53am
Wow, you are so right.  I can't even imagine it.....your son or daughter is still your child.  I know it happens to many teens trying to come out but for the life of me, I can't imagine ever turning your back on your child.  I am sorry I never got to meet Jimmy.  I'm sure he was a lovely person.  I hope he found some happiness.

I hope so too!

I've met so many people throughout my life who were totally disowned by one or both or their parents. I don't know why this one guy sticks in my mind so tenaciously...maybe because he was a stranger. My SO for 18 years and I were at a neighborhood gay bar in DC in the early 80s when HIV/AIDS was first being recognized as a scourge in the gay community. There was a guy sitting next to me with one of the most discouraged, depressed looks on his face I'd ever seen. Of course I spoke to him.

Long story short. He had just told his parents that he had AIDS, which was a death sentence at that point. Their reponse was to utterly reject him and to throw him out of the house lock, stock, and barrel. He was desperately ill and had nowhere to go. No wonder he was depressed.

He was much more stunned and devastated by their rejection than by his illness. We didn't know it then, but AIDS has a big mind/body connection, as do so many auto-immune diseases, so it REALLY set him up for a quick descent.

Mike and I cheered him up as best we could and found him a place to stay, but the image of his tears, the emotional impact of his lonliness and his sense of being totally alone facing death, has stuck with me all these years.

The possibility of that incredible lapse in parental love remains one of the potential tragedies of being gay. Of being human, for that matter.