a recommendation for your enjoyment. i just got this in by requesting it thru the local library.

or amazon has it for 29.96...imagine 3 shakespeare plays for 30 bucks and top notch ....complete with great sound quality and subtitles so you can savor the language.. 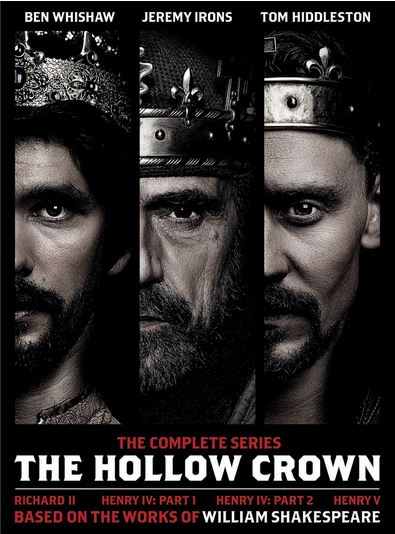 Shakespeare's historical plays can be a tough sell -- after all, they are political dramas that most modern people don't know much about.

But "The Hollow Crown" is up to that challenge, bringing to life Shakespeare's famous historical tetralogy ("Richard II," both parts of "Henry IV" and "Henry V") with an all-star cast and beautiful direction. The backgrounds are lush and the direction is powerful, but the real credit here goes to Tom Hiddleston, Patrick Stewart, Ben Whishaw and Jeremy Irons.

In "Richard II," a feud between Henry Bolingbroke (Rory Kinnear) and Thomas Mowbray (James Purefoy) leads to a duel... which is interrupted by King Richard II (Whishaw). Instead, the king banishes both men, and snatches the inheritance of Bolingbroke when his father (Patrick Stewart) finally dies. The nobles grow angry, and Bolingbroke begins to build a rebellion against his cousin -- with tragic results.

The story then skips about twenty years into the future for "Henry IV." King Henry IV (Irons) -- formerly Bolingbroke -- is troubled by brewing wars with Wales and Scotland, as well as the sudden rebellion of the fiery "Hotspur" Percy.

He's also not too happy with his son Hal (Hiddleston), who spends his time frolicking with thieves and pranksters, especially the corpulent Falstaff (Simon Russell Beale). When the Percys revolt against the king, Hal is given the opportunity to prove himself a worthy future king, and sets out to battle, with Falstaff beside him.

Finally, "Henry V" follows the new young king as he disarms assassination plots and prepares for the Battle of Agincourt. As he prepares to conquer France, Henry V grapples with his new responsibilities and seeks to find out what his men think of his rule. And he seeks to solidify his eventual victory by wooing a French princess.

Permalink Reply by Lucinda Stone on December 7, 2013 at 9:29am
I've always wanted to learn more about Shakespeare Thanks... Plus Amazon offered "much ado about nothing" so got that too !

it's funny how it seems that as we get older, we finally get enough wisdom, experience or life that we can finally see why certain writers and other artists are so profoundly 'deeper' than others......

These plays just ran on PBS.  A few of us English teachers went to see Richard II in Greenwich Village with the  Kelsey GRammer.   We had to help each other understand some parts.  I watched Henry IV 1 on PBS and Henry V I have seen many times.

A few weeks ago, I was subbing and had to show a part of Othello with Anthony Hopkins.  It was so good, I rented it from Amazon late one night and watched it on my computer.  Wished I'da hadda Roku that night.

You must watch Coriolanus if you never saw it.  I suggest you put on the subtitles so that you understand it better.  It has the BEST insults I have ever heard in it.

It may be corny, but to me, there is no writer like Shakespeare.  I don't care who wrote his plays, his command of the language, of psychology, of human nature was amazing.  The old dead white guys--sorry, but they were the BEST writers!  Chaucer, Dickens, Melville--nobody compares to them.

oh and some of these are available from amazon for 3.99

part of the understanding of the shakespearean language is the actor who speaks the lines and language. some hurry it too much and also it seems as tho the pauses are wrongly placed by the actor to be able to comprehend what the meaning and intentions of the words are. kinda like you and your uncle jack and his horse, jo....

So, if you haven't watched them yet, two suggestions: Coriolanus and Othello with Anthony Hopkins.  Wow!

i try to watch things like that when i can be alert enough to appreciate them..and the advent of dvds makes that wonderful..(oooo that was so good, i want to see that scene again!) versus the more modern writers like tv or movie where all they seem to do is repeat 'copy that', 'awesome' and insert 'cue explosion'. i've said it before: some people should be arrested for impersonating a writer

It could just be that have seen it or read it already. I can't tell you how many books I pick up or movies I watch and think, "That's just like___________________."  It's one of the biggest problems I have with aging.  I've already read the story line, bought these kinds of curtains, had that kind of dress, etc. etc.

especially some authors...they write the same book over and over and over...the only discernable difference is the names aren't the same in every book.

dickens was a great author for conveying the horror of being poor in england. he was so able to describe without preaching the joys of the workhouses, debtors prisons and orphanages....

Funny,  when I was SUPPOSED to be learning about Shakespeare and "how to write a poem", I was FLUNKING English as I was writing stories/poetry and answering letters from one of my foreign penpals and learning about their culture. NOT that I was a BRAINIAC....it was just my passion and interest.

Maybe I will take a second look at Shakespeare now that I am older and wiser...!!!