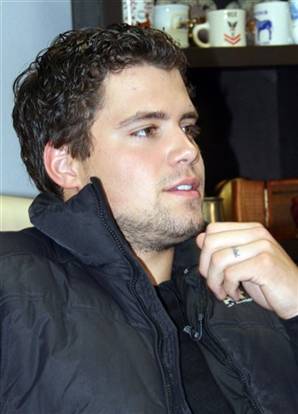 The 19-year-old father of Sarah Palin’s grandchild will pose nude for Playgirl, his attorney said Wednesday. To get ready for his close-up, Johnston is training three hours a day, six nights a week at an Anchorage gym with a local body builder.

A formal agreement hasn’t been reached with the online magazine, but the photo shoot is a “foregone conclusion,” said Johnston’s attorney, Rex Butler.

Johnston fathered a son with Bristol, the 18-year-old daughter of Sarah Palin, the former Republican vice presidential candidate who resigned as Alaska’s governor in July.

Publication of the photographs could be a source of embarrassment for Palin, often mentioned as a possible 2012 presidential candidate. Her memoir, “Going Rogue,” will be published next month and pre-sales already have made it a national best seller.

After Sen. John McCain chose Palin as his running mate, Johnston was thrust into the national spotlight early in the campaign after Palin abruptly announced her unwed daughter was pregnant and the couple would marry.

The couple broke up after the birth of their son, Tripp, in December. The relationship between the Palins and Johnston since then has often been strained, mostly over visitation issues.

Palin’s representatives did not respond to a request for comment on the Playgirl job.

Johnston also has been marketing himself for a possible modeling or acting career, spending time in New York and Los Angeles. His publicist, Tank Jones, said Johnston is fielding offers for other media jobs, including a reality show.

In the short spot, Johnston walks toward the camera with Jones, an Anchorage private investigator who also is Johnston’s bodyguard. As they approach the camera, fan voices call out to Johnston off-screen. As he snaps open a pistachio, a voiceover declares, “Now Levi Johnston does it with protection” — a reference that Johnston has said in interviews that he and Bristol sometimes had unprotected sex.

No date has been set for the Playgirl photo shoot, but Butler expects the world will get a gander of the finished product by the end of the year.

“We told him he would have to do what actors and actresses do. They get in the gym,” Butler said. “He got in the gym.”

Johnston has been working out with Marvin Jones, a former Mr. Alaska competitor and the brother of Tank Jones. The trainer has put Johnston on a low-carb, high-protein diet.

After a month of rigorous workouts, Johnston is showing impressive results, Marvin Jones said. But Johnston had a head start as a former high school hockey player.

“It’s kind of scary, he has so much energy. He’s working out before we work out,” the trainer said. “When it’s time for him to bare all, I think he’ll be ready.”

If the low-key Johnston has any pre-exposure jitters, none of his handlers have noticed.

“Levi is a man of few words, but once you know him, you know he’s very confident,” Marvin Jones said.

It wouldn’t be the first show-it-all with political ties. Patti Davis, the daughter of former president Ronald Reagan, posed nude for Playboy magazine in 1994.

Permalink Reply by J Lee S on October 7, 2009 at 9:55pm
WOW!! A prick in Playgirl!! Amazing!! Who even looks at Playgirl anymore? He might have been better off shooting for Abecrombie and Fitch or maybe some mens underware mag. Then somebody might actually catch a glimpse!

Permalink Reply by HAVE_A_HEART on October 8, 2009 at 8:47am
U think these two guys could appear in a photo layout together?

Permalink Reply by kainsworth on October 7, 2009 at 10:42pm
Is he even old enough to do that? I'm sorry, but I have no interest in looking at nude pictures of someone that young. Kind of creeps me out thinking about it.

Permalink Reply by Mother Sanity (JackieRodzinski) on October 8, 2009 at 8:45am
This reminds me vaguely of Jimmy Carter's embarrassing brother, Billy. But how would you feel if Sarah Palin gained social prominance because of her families 'curious antics'? Sometimes being bored can be downright dangerous.

Permalink Reply by darroll on October 8, 2009 at 11:50am
That’s the first job that freeloader ever had?