'CrossFire Hurricane' aka Can You Survive the Gun Wars ?

Sure it could be called a Rolling Stone song reference but now its' worse....gunfires, backfires, guns guns guns going off everywhere, someone is killing or trying to kill someone... doesn't matter if you think you're safe, what IS safe nowadays ? gosh, nothing is sacred or safe from gun violence be it personal, terrorist or just plain ol I'm a jerk and you're gonna die cause i'm an azzzz....so, here's the thing: how would you react and save yourself - if at all possible.. escape from gunfire...its' like when I lived on the West Coast, I could prepare for an earthquake...you see them training in schools now, hospitals, etc but what about individual citizens...it should give you pause and make you think: how do I keep me and mine safe in a Crossfire Hurricane ?

There are still safe areas in the US to live.

This is a bad state to stay safe. If someone is shooting at you and you defend yourself, you are going to jail.

Liberals just don't get it.

When that guy shot up the mall in Oregon a guy with a concealed gun permit had the guy in his sights.
He was afraid to shoot the guy because the guy has to say I’m going to kill you.
What I don’t like about gun control is the law makers don’t know the difference between an automatic and a bolt action 22.
People I know are just ignoring the government’s rules because there is too damn many. They want us to go on a picnic unarmed? Have they never heard of wolves or bears. A few miles from here they have giant wolves that have been known to kill for the fun of it. We have found some people kill for the fun of it also.
On Sunday we can all meet behind the barn and buy and sell guns and dope. At least we are safe.

I have never heard of a case of a person killed by a Wolf in the wild in America.  Bears on average kill about two.  If you want to fear something, look at the number of people killed on the highway.

Why aren’t we discussing keeping nuts away from guns..
The nuts aren’t nuts, the guns are.
I should of mentioned cougars, they love eating joggers here. The US planted wolf packs are growing.
I love being a new criminal after gun control.
I think I’m beginning to trust dope dealers more than our government.

darrol, REALLY, Giant wolves are why you need assault weapons? 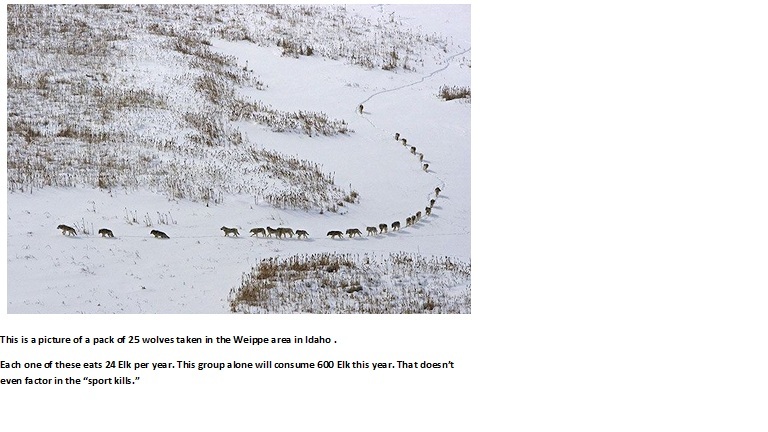 You can take a single shot 22 if you want when you are in the woods.

Like a lot of things, darrol is wrong about these wolves being in Idaho.

Thanks for clearing that up.

Still won't go out in the woods unarmed.

2006, But I doubt that wolves have evolved into man eaters in the last couple of years. (please note, 1 wolf attack, IN CANADA, and bears have not been ruled out)

Conservationists have long assuaged the public’s fear of wolves by saying that there have been no documented instances of a healthy wild wolf killing a human being in North America. Until now, that is.

On Nov. 8, a search party found the partially consumed body of 22-year-old Kenton Joel Carnegie in the woods of northern Saskatchewan. Carnegie had gone for a walk and didn’t return to the surveyors camp where he was working.

Paul Paquet, a University of Calgary ecologist who investigated the case, says a recent increase in energy development has drawn more people to the remote area and left it peppered with open garbage dumps. Four wolves fed regularly at a nearby dump and had lost their natural fear of people.

Those wolves are the most likely culprits, and at least three have been killed. But investigators have not yet ruled out the possibility of a bear attack.

To prevent wolves from becoming accustomed to humans, Paquet advises securing any food left in dumps or campsites. People should stay at least 100 yards from wolves, he says.

In the United States, there are some open dumps in wolf country, says Fish and Wildlife Service wolf recovery coordinator Ed Bangs. But, he adds, many people already bear-proof their garbage, and authorities haze overly bold wolves with noise-making "cracker shells" and rubber bullets.

Given that a handful of fatal wolf attacks have been recorded in India and Europe, experts say such an attack in North America has always been a possibility. But the odds are extraordinarily low, points out L. David Mech, a leading wolf biologist: "Wolves are still not any more dangerous than they ever were."

Of course no one would believe the National Geographic.