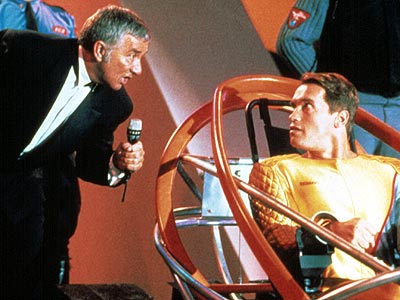 "The Running Man" is also the name of a reality / court TV program in that future world.  Once someone is charged with a crime, it becomes a reality show.  Ultimately it depends upon the viewers to like or dislike the defendant, and to feel strongly enough to drive ratings and advertising dollars.  The show depends upon a certain collusion between corporate and government interest in sedating and milking the masses.

But the show makes me wonder who is behind the curtain in the Emerald City.  There are six media empires in the U.S., and someone has to be in charge of selecting content.  Who selected Jodi Arias to be the "Running Man"?  Is it done by a committee that studies demographics?  Do they do audience-sampling where they try out different themes?  I suppose on any given day there may be hundreds of murder trials underway in the courthouses of America.  How did Jodi Arias claw her way to the top of the ratings heap?  Who "green-lighted" that episode?

All of that pondering makes me think about Noam Chomsky.  Not because of his ground-breaking work in linguistics, but because of his documentary, "Manufacturing Consent."  Chomsky believes that there is no more difference between the Republican Party and the Democrat Party than there is between the Chicago Bears and the New York Jets.  It's just two teams assembled by our corporate masters to keep us entertained and engaged.  While we are otherwise distracted, our masters may rape our economy and country as they wish.  The best way to keep us distracted from asking "Who is behind the curtain?" is with TV.  Are you on the "George Zimmerman is Innocent" team, or on the "George Zimmerman is Guilty" team?  Do you root for the Boston Red Sox?

A final note here.  Conservatives call Chomsky a "communist."  Liberals prefer to think that he is a "socialist."  I suspect that Chomsky himself believes he is the most dangerous "ist" -- a realist.

I find it in outrageous bad taste that the picture of the surviving Boston Marathon bomber has made the cover of Rolling Stone. UGH, disgusting because Rolling Stone covers are more for heroes than villains.  Newsweek , I could understand, they must have had Osama Bin Laden on the cover at some point. Maybe I'm not being articulate enough about how perverse I find that cover and why.

The health care experience I had today was sooo Kafka! The design of the system is rather unfriendly. I used a few colorful words finally and was connected to someone who answered my questions without passing me along to another dead end. I guess I better eat my seaweed and grind more flax seeds into my food cause if those bozos ever get their meat hooks into my derriere, I'm a goner for sure.

Sad commentary?  Yes, it is.  And it leaves me wondering where we go from here.  It was 55 years ago that Edward R. Murrow warned us of what TV news was becoming.  Where will it be 55 years from now?  Merry, more and more I focus on "being the revolution I want to see."  (But what I see is mostly a funhouse mirror on a dark night.)

I refuse to be manipulated by the media as much as possible. I guess I'm kind of bitchy cause I don't like being manipulated period. You might hear some rather frank language come out of my mouth.

Yesterday Ray and I were talking about whether or not the media was trying to start a riot with it's coverage so that it would have more news to cover. I missed the Jodi Arias trial too. On purpose. I don't control the world and all the less than perfect things that happen in it. Just trying to make a tiny corner of it a place that heals the battle scars we've all incurred.