Obama has accomplished the amazing feat of convincing millions of Americans that black is white, that cold is hot, that the bad economy is the fault of George W Bush, and the only things standing between America and peace on earth are those darn Republicans and greedy capitalists.

As author Thomas Sowell points out in 'Is Reality Optional ?' social history in the last 30 years has been a history of replacing what worked with what sounded good. And no-where is this more evident than in the 'change' Obama is foisting on the American people.

The empty rhetoric of 'social justice' and 'compassion' is convincingly and successfully being used to justify ever more ludicrous social policies, which just happen to come with a huge price tag and more government control.

Ignored by the left and the media, however, is the inconvenient fact that every single policy promoted by Obama and passed by congress has been a dismal failure. From the jobs 'stimulus' package that has cost taxpayers a whopping $236,436 per job created - to the the 'cash for clunkers' - to the $61 billion bucks taxpayers just lost through the AIG and auto industry bailout.

Add in the $75 billion mortgage relief program to stem the largely government caused 'foreclosure crisis.' This program has helped a grand total of 31,000 borrowers to date, a paltry 4% of the 760,000 who have applied.

Despite the dismal failures of these policies, Obama and his cohorts continue advocating more of the same. As Dr. Sowell points out, "The anointed are often wrong but never in doubt."

Though 80% of Americans are happy with their health insurance, Obama has declared a health care crisis. Obama and congress have devoted most of the year to imposing government run health care on all citizens, despite the fact that 61% of Americans oppose it.

Though evidence has recently surfaced undermining the dire claims of global warming, our elected elites continue to ignore relevant science, insisting that a massive redistribution of our wealth is needed in order to pay an imagined 'climate debt' to third world countries. Meanwhile, record unemployment and rising fees and taxes continue to devastate businesses and families across the nation. The exception are federal workers, who just got a 2% pay raise.

As Democrat leaders and their allies take to the airwaves denouncing corporate greed, our public servants are scrambling to enact policies that enable them to extort an ever increasing portion of the wealth created by American workers. In the process, severely undermining the rule of law and ignoring the limitations imposed by our Constitution.

The Obama administration has plunged America into debt to the tune of a record $12 trillion dollars. That's $39,000 owed by every man woman and child in America. And there is no end in sight.

House Democrats just passed a $1.1 trillion dollar spending bill to fund the federal government. This bill includes $2 billion for 'climate' research, major spending boosts for domestic agencies and foreign aid. It also includes more than 5,200 pork barrel projects costing $3.9 billion. On top of that, Democrats are preparing to raise the federal debt ceiling by as much as $1.8 trillion before New Year’s.

Obama's policies are destroying the dollar and bankrupting America. Moody's just issued a warning that our triple A rating is in danger. Our president is also in the process of ceding American sovereignty to world bodies like the United Nations and the International Criminal Court.

What Obama has accomplished is astounding. He has managed in the short space of one year to dramatically alter the historical focus on individual rights and liberties to an ephemeral concept that focuses on government primacy.

Due to Obama's charisma and his skill in manipulating the system and redefining words to fit transient meanings, many Americans continue to believe Obama's rhetoric, willfully ignoring the underlying reality. Their belief has taken on a religious fervor based on faith and emotion and any facts to the contrary are summarily dismissed. After all, "Obama won."

Once again, Thomas Sowell says it best: "We may be entering an era where the greatest dangers to the survival of Western civilization will come from internal social deterioration. Other great civilizations have declined and collapsed. We may be the first, however, to sink slowly into the quagmire, still beaming from ear to ear in self-congratulation at how 'innovative' we are in our social policies."

Obama is a dangerous man. He has convinced millions of Americans that they are entitled to the fruits of another man's labor. Virtually all of his policies to date have been designed to foster a dependence on government. But what the government gives, the government can take. As millions of enslaved peoples across the globe could attest - if they were allowed.

Nancy Morgan is a columnist and news editor for RightBias.com
She lives in South Carolina

Comment by Nancy Morgan on December 18, 2009 at 2:20am
No
No
Yes
"That's not original, it is promoting self importance by duplicating "your view" and trying to further your exposure on a social networking site."
Its my take on the news. And there's nothing lazy about the amount of research involved. Maybe you should spend your time acquiring knowledge, like I do, instead of attacking messengers you don't like. That's pretty lazy:)
BTW: I'll be too busy promoting my POV on alot of blogs to spend any more time replying to someone who has absolutely nothing constructive to say. Get a life, hon

Comment by Nancy Morgan on December 17, 2009 at 1:28pm
" point out "your view" of bad behavior and to say the least, it is inexcusable. " Lets see, I don't have the right to an opinion?
Speaking of facts, because CNN gets paid for promoting their views, does that make them invalid? At least I'm more honest than CNN in that I identifymby rightbias.
If you're so concerned with facts, maybe you'll tell me where you got your 'fact' that I'm being paid for my work. If not, maybe you should start backing up your statement by copying and pasting the original souce in your comments:)

Comment by Nancy Morgan on December 16, 2009 at 2:19am
Vernon,
Pointing to bad behavior (or policy) by others does not excuse bad behavior. 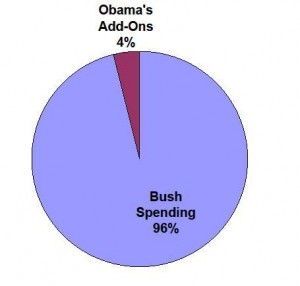 Comment by Bull on December 13, 2009 at 7:57am
This statement is a little disingenous.
"The Obama administration has plunged America into debt to the tune of a record $12 trillion dollars".
Because when Bush left office the debt stood at 10.7 trillion, so 1.3 might be blamed on the president.

Comment by Nancy Morgan on December 13, 2009 at 3:36am
Vernon,
Good for you for responding with facts instead of emotion. In my experience, that's very rare.
It would be interesting debating with you the actual effects of the items you took the time to post.
Would that Americans could have an honest debate about important issues instead of the hateful rhetoric that has taken its place. You give me hope...

Comment by Vernon Windsor on December 12, 2009 at 2:41pm
What has President Obama accomplished?

1. Ordered all federal agencies to undertake a study and make recommendations for ways to cut spending

2. Ordered a review of all federal operations to identify and cut wasteful spending and practices

4. Beginning the withdrawal of US troops from Iraq

5. Families of fallen soldiers have expenses covered to be on hand when the body arrives at Dover AFB

7. Ended media blackout on covering the return of fallen soldiers to Dover AFB; the media is now permitted to do so pending adherence to respectful
rules and approval of fallen soldier's family

8. The White House and federal government are respecting the Freedom of Information Act

9. Instructed all federal agencies to promote openness and transparency as much as possible

11. Limits on White House aides working for lobbyists after their tenure in the administration

12. Ended the previous stop-loss policy that kept soldiers in Iraq/Afghanistan longer than their enlistment date

13. Phasing out the expensive F-22 war plane and other outdated weapons systems, which weren't even used or needed in Iraq/Afghanistan

21. The prison at Guantanamo Bay is being phased out

25. The public can meet with federal housing insurers to refinance (the new plan can be completed in one day) a mortgage if they are having
trouble paying

26. US financial and banking rescue plan

27. The secret detention facilities in Eastern Europe and elsewhere are being closed

28. Ended the previous policy; the US now has a no torture policy and is in compliance with the Geneva Convention standards

29. Better body armor is now being provided to our troops

31. Restarted the nuclear nonproliferation talks and building back up the nuclear inspection infrastructure/protocols

32. Reengaged in the treaties/agreements to protect the Antarctic

33. Reengaged in the agreements/talks on global warming and greenhouse gas emissions

34. Visited more countries and met with more world leaders than any president in his first six months in office

35. Successful release of US captain held by Somali pirates; authorized the SEALS to do their job

37. Attractive tax write-offs for those who buy hybrid automobiles

42. Instituted a new policy on Cuba, allowing Cuban families to return home to visit loved ones

43. Ended the previous policy of not regulating and labeling carbon dioxide emissions

45. Immediate and efficient response to the floods in North Dakota and other natural disasters

47. Negotiated deal with Swiss banks to permit US government to gain access to records of tax evaders and criminals

48. Ended the previous policy of offering tax benefits to corporations who outsource American jobs; the new policy is to promote in-sourcing to bring
jobs back

49. Ended the previous practice of protecting credit card companies; in place of it are new consumer protections from credit card industry's
predatory practices

50. Energy producing plants must begin preparing to produce 15% of their energy from renewable sources

52. Ended the previous practice of forbidding Medicare from negotiating with drug manufacturers for cheaper drugs; the federal government is now
realizing hundreds of millions in savings

59. Sent envoys to Middle East and other parts of the world that had been neglected for years; reengaging in multilateral and bilateral talks and
diplomacy

61. Beginning the process of reforming and restructuring the military 20 years after the Cold War to a more modern fighting force; this includes
new procurement policies, increasing size of military, new technology and cyber units and operations, etc.

63. Ordered a review of hurricane and natural disaster preparedness

65. Students struggling to make college loan payments can have their loans refinanced

67. Many more press conferences and town halls and much more media access than previous administration

69. The FDA is now regulating tobacco

72. Authorized discussions with North Korea and private mission by Pres. Bill Clinton to secure the release of two Americans held in prisons

73. Authorized discussions with Myanmar and mission by Sen. Jim Web to secure the release of an American held captive

75. Established independent commission to make recommendations on slowing the costs of Medicare

76. Appointment of first Latina to the Supreme Court

77. Authorized construction/opening of additional health centers to care for veterans

85. Paid for redecoration of White House living quarters out of his own pocket

87. Attempting to reform the nation's healthcare system which is the most expensive in the world yet leaves almost 50 million without health
insurance and millions more under insured

88. Has put the ball in play for comprehensive immigration reform

89. Has announced his intention to push for energy reform

90. Has announced his intention to push for education reform

Oh, and he built a swing set for the girls outside the Oval Office!