James Kaler, astronomer and author of "Heavens Gate: From Killer Stars to the Seeds of Life, How We are Connected to the Universe."

The image below is an infrared photo of M82 is a remarkable galaxy of peculiar type in constellation Ursa Major. It is usually classified as irregular, though probably a distorted disk galaxy, and famous for its heavy star-forming activity, thus a prototype member of the class of starbursting galaxies. In the infrared light, M82 is the brightest galaxy in the sky; it exhibits a so-called infrared excess, being much brighter at infrared wavelengths than in the visible part of the spectrum. Over 100 young globular clusters have been discovered in M82 with the Hubble Space Telescope. Their formation is probably another effect triggered by a tidal encounter with M81 between 50 and several 100 million years ago.

Lores Much of what you see above is outside our human visual band, our eyes cannot register wave photons no matter how powerful they may be. Longer that the visual wavelength limit -up to about a millimeter-lies the infrared. At the short end is violet, with orange, yellow, green, blue and hundreds of overlapping shades. Longer waves, into kilometer-wavelengths toward the unknown end are what we call "radio."

Shorter than the visual limit are the ultrviolet -all running in the vacuum at the speed of light. At less than a percent of the wavelength of visual light are X rays, and at a factor of 100 smaller are the deadly gamma rays.

One of the great acheivements of modern astronomy is the entersion of "human sight" -opening the electromagnetic spectrum to our view and discovery beginning in the 1930s with radio estronomy and ending with NASA's great fleet of space observatories and the Fermi Gamma-ray Space Telescope (FGST, formerly GLAST), working to unveil the mysteries of the high-energy universe. Launched into orbit on June 11, FGST studies the most energetic particles of light, observing physical processes far beyond the capabilities of earthbound laboratories..

A composite of our Milky Way's core is compsed of images from the Hubble Space Telescope in near-infrared light, the Spitzer Space Telescope in infrared light, and the Chandra X-ray Observatory in X-ray light. A mosaic of vast star fields is visible, along with dense star clusters, long filaments of gas and dust, expanding supernova remnants, and the energetic surroundings of what likely is our Galaxy's central black hole. 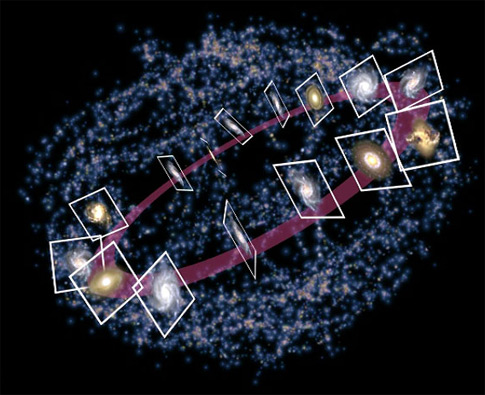 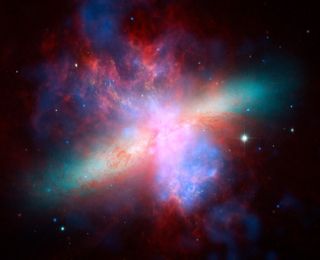 Very beautiful and really very good to read the article. So I guess we can't see such colours in the space with no special equipment. I can imagine how amazing evetyrhing looks like :)