The Clown announced today that he will release an extremely detailed report on his financial condition sometime before the election.

We want your taxes- you know, the one that you actually filed with the IRS...the one that has the true facts and figures, not some doctored, fictional, ghost-written pap that is unverifiable.

An Op Ed writer for the NY Times wrote today that it's difficult to believe anything that The Clown spews because he lies about nearly everything.

This was regarding his most recent comments about the drone attacks in Saudi Arabia and who really was responsible.

Not being able to repeat a simple weather forecast because he's mentally not up to the task, is one thing (Or one of thousands of things), but it appears so far that he has no real information on this issue yet he is dribbling phrases like "lock and loaded" in an effort to frighten our current enemy of the week.

It was quite clear early on in this joke presidency that he was a paper tiger to most of the world.

And I suspect it hasn't changed much today. 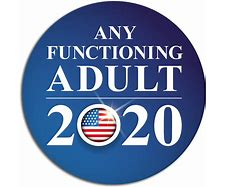 Heck! A cheese sandwich with a D after it's name.

I contributed to Amy McGrath s campaign against Moscow Mitch, and to Sara Gideon (vs Susan Collins)

Huh!  Some places in the world actually care about preventable deaths.

I'm not sure how to feel about this.  It seems that the individual cultures of the world are becoming more and more homogeneous -- it's like animal species becoming extinct.  On the other hand, if people die because they don't get off the track in time, that's not good either.

"Aww, Darn, Mr. Precedent...
It looks like those wacky Mexican cartels have been able to cut
through your new wall.
All they have to do is go to Home Depot and buy a reciprocating
saw and in a few minutes, they're through.

And also - they've been able to figure out ways to climb over them.