The end of the standard model ...

Most of us could have guessed since ~1980, it sure was expensive to put it to rest.

"Recent findings have dealt a significant blow to the theory of physics known as supersymmetry. At the Large Hadron Collider at CERN, researchers have detected one of the rarest particle decays ever seen in nature. Many have hoped that the LHC would confirm the presence of supersymmetry using these particle decays. Unfortunately, it seems the opposite effect has happened.

Supersymmetry(or SUSY for short) is the theory that connects the two basic types of particles seen in nature - fermions and bosons. In a nutshell, fermions are the constituents of matter and bosons are the carriers of fundamental forces(like a photon in the case of electromagnetism). SUSY paints a picture of every known boson having a heavy 'superpartner' that is a fermion and every fermion would have a heavy partner that is a boson. This beautiful composure would stitch the Standard Model into more a complete picture of our reality. This would go on to solve mysteries of particle physics, like what the heck dark matter is.

In order to attempt to prove this theory, researchers measured the decay between a particle(known as a Bs meson) into two particles(known as muons). The team has calculated that for every billion times the Bs meson particle goes through decay, it only decays in this special way a measily three times. If the superparticles were to exist, it would require the special decay to occur much more frequently. This experiment would have been a huge win for this theory, but has resulted in a failure.

The LHC has been the home of very exciting news for some theories; it can result in failures with other theories. But with every door that closes, a new one opens. If supersymmetry is not the answer for dark matter, then physicists will continue to hunt for alternative ideas to fill in the gaps of the Standard Model. But let's not give up complete hope on SUSY just yet - that door still remains slightly ajar." 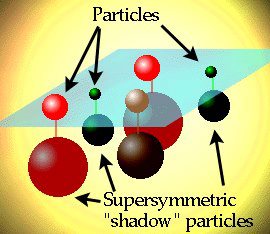 Google translation: "So? As it affects the quality of my coffee."

Who cares about coffee...!

Black is black and white is white...IN the Particle world....

Whether proving or disproving, the scientific method is always a plus. Sometimes turns hope into "I hope I can figger out something else to study". It's all good.

Permalink Reply by Lip Service on December 29, 2012 at 4:14pm
Super symmetry is technically not part of the standard model but an extension based on the standard model. The demise of SUSY only affects these extensions, one such speculation, string theory with its eleven dimensions has been seriously damaged.
Physicists worried that with the settling of the standard theory with the Higgs in place that would close the book on this area of research (gauge theory) but how can that be when we realize that we can account only for ten percent of the universe, the rest are two entities that we know almost nothing about, dark matter and dark energy.

The Higgs boson has a fermionic superpartner, the Higgsino.

The theory of supersymmetry has been widely supported because, in addition to being an essential element of superstring theory (it's the "super" part), it neatly explains how electromagnetism and nuclear forces are united, and it provides an answer to dark matter. True, the LHC evidence suggests it just might be fiction.

However, the LHC  hasn't debunked superstring theory directly. The theory maintains that everything in the universe is actually made up of extremely small vibrating strings. The strings, if they exist, would need to be much smaller than even the smallest particles that are known, and it's impossible for current science to probe such tiny scales.  That's where I am and have been for what its worth :)

Which means a couple of things. It could mean that the simplest version of supersymmetry is wrong, but there are more complicated versions of the theory that still allow for the existence of sparticles, but don't necessarily require the B-mesons' decay to show the influence of them.