I set my mustache on fire while trying to figure out the wording here...

Once again, I am thinking to darn much but it's part of my job. Anyway, when you praise a person for a job well done, when you say that you look up to them because of their accomplishments, has it ever occurred to  you that you are piling on the pressure for them to continue? That you are saying "Don't let me down because I'm following you." In such a case, you do not allow respite. Or so I wonder. What do you think?

No, I just thank them for helping me out and give them 10 dollars an hour and they keep coming back.

See, this resonates with me, because I'm sort of in the public entertainment field. (Not counting being the most annoying clown on TBD)

I get a fair amount of feedback from listeners, telling me "Good show" a bit more often that the death threats I used to get. But there's something disquieting about having "followers", when I try to stress that I want people to feel inspired to go out and find new and unusual musics on their own, without relying on me to do it for them.

It is now immeasurably easier to listen to an entire galaxy of musical variety than at any other time in human history, thanks to the internet. You could quit your job, sew yourself into a comfortable chair, weld a set of headphones to your head, set your internet radio to "Scan" and not get out of that chair for the rest of your life, and you still wouldn't hear a 100'dth of the music that's out there. There's just too  much of it, and that's a good thing.

So...I don't want people to like a song just because silly me was the guy who played it. I do not want my "personality", such as it is, to overshadow the music itself. I want them to like it because it punches their button, it rings their bell, and it yanks their chain, hard. I want them to like it if they'd never heard of me. It's flattering to know that people enjoy my musical taste (and antics) to the point that they make it a point to pay attention to me, but I hope that they only regard me as a guy pointing out towards the rest of what's out there, and not as their final destination. It's Not About Me. There's SO much stuff that I don't play, and I loathe contests of who has the biggest hipster cool quotient.

That being said...When I get a call from a listener, out of breath and jacked up and begging to know what a particular song was and who it was by - And needing to know RIGHT THEN AND THERE, they don't want to take a chance on missing the break in between sets when I list everything I'd just played, who played it and where it came from, they need to know IMMEDIATELY or somebody's head will roll -

Yeah, I get a rush from that. Not a "Damn, I'm good" rush, but more a "Hey, ME TOO!" kind of thing. Because, I certainly know better than to expect anybody to feel that way about anything else I play that night. Those are long odds, and I'm just happy to get away with as much as I do.

You compliment your friend on their mustache and suddenly she won't talk to you. 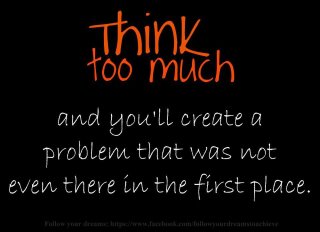 Dot, the same goes for drinking too much.

Kinda reminds me of a quote from a certain blond lady I know, "Don't believe everything you think."