Do you decorate for Halloween?

Do you decorate? I never used to (Christmas was my thing) but my daughter left some stuff here a couple of years ago, and I've added a lot of lights, and some more decorations.

The newest addition this year. A giant skull hung in a fish tail palm tree. I have one mini strobe light, but may get another one and mount it in the tree so this guy shows up better at night. 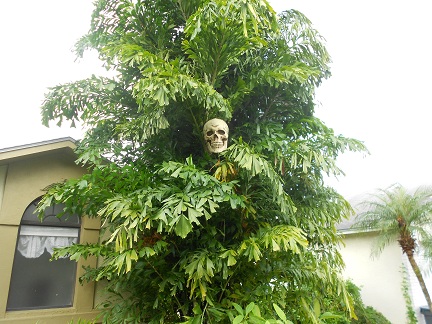 Its been quite a while now, since a trick or treater showed up at my house.  In fact, its probably been at least 15 years since more than one stopped by.  I live in a neighborhood a few miles from town, and most of the residents are Seniors.... lots of both seasonal and year-round varieties are found here.

Eleven years ago I carved about twenty pumpkins into Jack-O-Lanterns, but that was because I was in the process of quitting smoking, and I had a lot of nervous energy.

Usually, I buy a big bag of a candy I like, you know, just to be prepared in case some kid actually does show up.  This year, however I really am trying to eat better, so I probably will forego the sweet stuff.

I won't do any decorating either, it just doesn't seem to be good investment of my time or money.

Oh Jeezees.  That time of year again?  I'll think about it.  Every year we talk about doing something, but my BF won't do anything if it involves climbing a ladder.

This guy involved me standing one rung down from the top of a ten ft. ladder. I kinda doubt that this skull will be in the same place next year. (I'll be a year older, and the tree will be a year taller)

I know it doesn't look that big from the pic, cause the tree is so big,

I'm not taking it down to measure' but the skull is at least 24 inches and I think closer to 30 inches tall.

I'll measure him next year!

That's creepy TBub.  I do some crafty, mostly indoor stuff.

If it quits raining, I'll finish the graveyard today. That and a couple more strands of lights and I'll be done. Well, done until Halloween. I don't put out the fog machines (I bought another one this year so now have two) and the strobe light until then.

Who you gonna bury???