To fathers past, present, and future.

And for me, to my own father, long gone; to Michael, my long-time love and the father of our son; and to My Beloved Draughn--one very, very special father of daughters...I love you and honor you all. 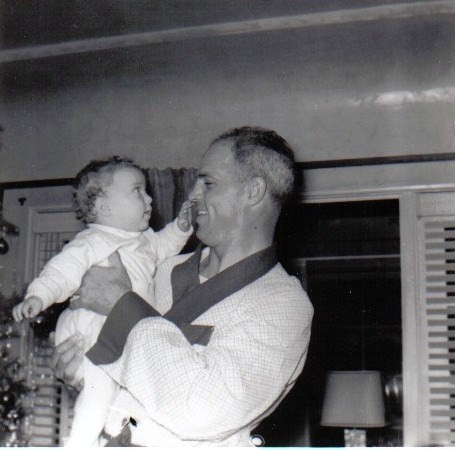 Tags: I give you my heart Draughn, I love you Daddy, I miss you Michael

Permalink Reply by Angharad on May 14, 2011 at 5:27pm
I'm assuming this is your Dad...what a beautiful smile, and lovely vibes.

A pair of his old shoes

were left in the back closet-

Oh, Dave! This is absolutely wonderful, on so many levels.

A tear and many kisses...

our son's soul inhabits you

his heart in your chest

I love and admire you for honoring him, Dearest.

Happy Father's Day, Daddy, wherever you are.

To My Beloved D.

your daughters love you...
you're the beacon they follow
safely to harbor

For you and the girls, Darling...

I was thinking about how men are often characterized as the less "present" parent--somewhat less feeling or less involved in the emotional, physical, spiritual, and psychological growth and well-being of their children.

I have found this to be untrue in my experience. Although my father was absent because of his Naval career, he was a loving and tender dad. The father of my son was a super parent--totally involved, loving, supportive, and demonstrative. My Beloved, Draughn, is the best father I have ever known. His world revolves around love for his daughters--he is utterly present, always encouraging, always loving and understanding while furnishing the perfect balance of  guidance and discipline, he is a grown-up in the best possible way while staying young at heart and physically fit so that he can participate with joy and lightness of spirit in their everyday lives. He has laid a foundation of love and commitment for them that will serve them well their entire lives.

Even this amazing lullaby was written by a man, music and words.

Although this poem is not haiku, I want to post it here. Cummings exquisitely illustrates in it the kind of father I was speaking of in my last post. There are more fathers like this than I think is generally acknowledged.

My father was, and My Draughn is, such a father.

my father moved through dooms of love

my father moved through dooms of love

through sames of am through haves of give,

singing each morning out of each night

my father moved through depths of height

this motionless forgetful where

turned at his glance to shining here;

that if(so timid air is firm)

under his eyes would stir and squirm

newly as from unburied which

woke dreamers to their ghostly roots

and should some why completely weep

my father's fingers brought her sleep:

for he could feel the mountains grow.

Lifting the valleys of the sea

my father moved through griefs of joy;

praising a forehead called the moon

joy was his song and joy so pure

a heart of star by him could steer

and pure so now and now so yes

the wrists of twilight would rejoice

keen as midsummer's keen beyond

conceiving mind of sun will stand,

so hugely) stood my father's dream

his flesh was flesh his blood was blood:

no hungry man but wished him food;

no cripple wouldn't creep one mile

uphill to only see him smile.

Scorning the Pomp of must and shall

my father moved through dooms of feel;

his anger was as right as rain

his pity was as green as grain

than he to foolish and to wise

so naked for immortal work

his shoulders marched against the dark

his sorrow was as true as bread:

no liar looked him in the head;

if every friend became his foe

he'd laugh and build a world with snow.

My father moved through theys of we,

singing each new leaf out of each tree

(and every child was sure that spring

danced when she heard my father sing)

let blood and flesh be mud and mire,

giving to steal and cruel kind,

a heart to fear,to doubt a mind,

to differ a disease of same,

conform the pinnacle of am

though dull were all we taste as bright,

maggoty minus and dumb death

and nothing quite so least as truth

--i say though hate were why men breathe--

because my Father lived his soul

love is the whole and more than all