Permalink Reply by funesthememorious on June 13, 2011 at 3:58am
If anyone has seen my dog, please contact me at x2883 as soon as possible. We're offering a substantial reward.  He's a sable collie, with three legs, blind in his left eye, is missing part of his right ear and the tip of his tail.  He's been recently fixed.  Answers to "Lucky".

Permalink Reply by Quinn on June 16, 2011 at 5:20pm
A default Sans Serif font walks into a bar. The bartender says, "Sorry, we don't serve your type here!"


I'm writing this slow, because I know you can't read fast.


We don't live where we did when you left home.  Your Dad read in the
newspaper that most accidents happen within 20 miles of your home, so we
moved.  I won't be able to send you the address because the last Arkansas
family that lived here took the house numbers when they moved so they
wouldn't have to change their address.


This place is really nice.  It even has a washing machine.  I'm not sure it
works so well though.  Last week I put a load of clothes in and pulled the
chain,  We haven't seen them since.


The weather isn't bad here.  It only rained twice last week;  the first time
for three days, and the second time for four days.


About that coat you wanted me to send;  your Uncle Billy-Bob said it would
be too heavy to send in the mail with the buttons on, so we had to cut them
off. !  You can find them in the pockets.


Bubba locked his keys in the car yesterday.  We were really worried because
it took him two hours to get me and your Pa out.


Your sister had a baby this morning, but I haven't found out what it is yet,
so I don't know if you are an aunt or uncle.  It's the dangdest thing, but
the baby looks just like your brother.


Uncle Bobby-Ray fell into a whiskey vat last week.  Some men tried to pull
him out, but he fought them off and drowned.  We had him cremated;  he
burned for three days.


Three of your friends went off a bridge in a pickup truck.  Bubba was
driving.  He rolled down the window and swam to safety.  Your other two
friends, Cletus and Buford, were in the back.  They drowned because they
couldn't get the tailgate down.


There isn't much more news at this time.  Nothing much out of the normal has
happened.

Three men, one German, one Japanese and a hillbilly
were sitting naked in a sauna.
Suddenly there was a beeping sound.
The German pressed his forearm and the beep stopped.
The others looked at him questioningly. "That was my pager "he said,
"I have a micro chip under the skin of my arm."
A few minutes later a phone rang.
The Japanese fellow lifted his palm to his ear.
When he finished he explained, "That was my mobile phone.
I have a micro chip in my hand."
The hillbilly felt decidedly low tech, but not to
be outdone he decided he had to do something just as impressive.
He stepped out of the sauna and went to the bathroom.
He returned with a piece of toilet paper hanging from his behind.
The others raised their eyebrows and stared at him.
The hillbilly finally said...
"Well, will you look at that, I'm getting a fax."

A skeleton walks into a bar and says, "Gimme a beer, and a mop."

Should I continue or wait until I get back?

Permalink Reply by TeeBubbaDee on June 17, 2011 at 7:42am
A skeleton walks into a bar.
Here's a slightly different versin Quinn. 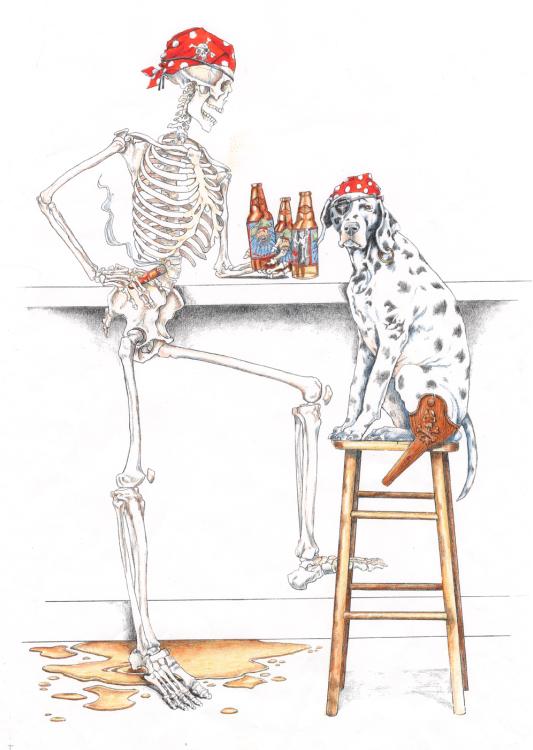 This stuff run's right through me

I have this tee shirt.

Permalink Reply by funesthememorious on June 17, 2011 at 11:52am
A horse walked into a bar. Several people got up and left as they spotted the potential danger in the situation.