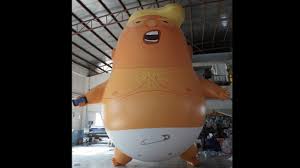 where can I get one of those?

Lol...this is what will be flying over the Parliament building in London when Donald McRonald visits the UK. It has the approval of London's mayor...:)

Whew! Have finally gotten rid of that pit in my stomach over those kids in that cave - very happy ending. Have been claustrophobic nearly all my life- have to be drugged to take an MRI. :)

They're all out, finally ? So good to hear. Last I heard yesterday, 4 left  to go.

LONDON (The Borowitz Report)—Queen Elizabeth II has cancelled a scheduled Friday meeting with Donald J. Trump after complaining of a “flare-up of bone spurs,” Buckingham Palace has confirmed.

The announcement took many royal watchers by surprise, because in her sixty-six-year reign the Queen had never before complained of bone spurs.

But, according to the Queen’s spokesman, Peter Rhys-Willington, Elizabeth had intentionally kept her chronic bone-spur condition a closely guarded secret until now. “Her Majesty is a very brave woman, and has not wanted to unnecessarily worry her subjects,” Rhys-Willington said. “And so, for decades, she has suffered in silence.”

The Queen referred to her bone spurs obliquely in an official statement issued on Thursday. “We are sorry to have to cancel the engagement, but we feared that meeting Donald Trump would be most painful,” the Queen’s statement read.

BTW - This is a satirical piece, lol, taken from the internet.

(Yeah. I was kind of hoping it  was not)

Donkeys...they're not just for breakfast anymore...:)

Thanks, Bmichael.  Made me smile.

Learned a new term this week – CHF (Congestive Heart Failure). Spent 5 days being poked, prodded, starved, and breaking hearts. (Those cute little nurses really got off on the older guy with the ponytail who’s a master at pretending to suffer – lol)

Sometime in the coming week I will return to try a small part replacement…the one I got is a little puny after all these years.

The prognosis is good…. will keep you posted.