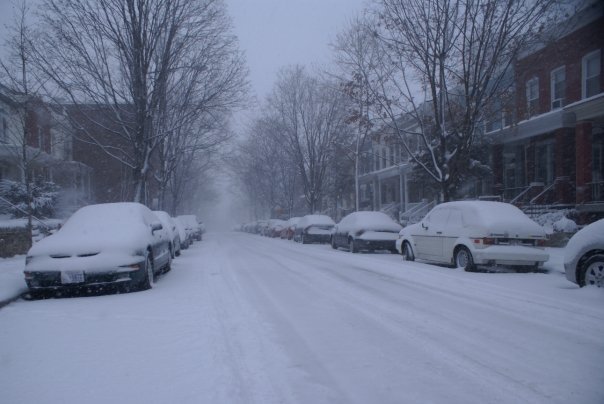 She lay sleeping soundly beside him. Outside thick flakes of snow fell silently blanketing the landscape and casting a bluish-grey light that filtered softly through the window curtains. He ran his palm over her warm, naked skin from her breast to the curve of her waist, over her hip and finally down her thigh relishing the feel of her fullness beneath his hand. He inched closer to her the rich, heavenly scent of she enveloping him and rousing the passion he held for her yet again.

The unexpected snow had caused the city to come quite nearly to a halt. Schools, businesses and government offices were closed. Washington had never been a city that handled snow well. Today he was thankful for the gift of a snow day, an extended weekend, a brief reprieve from everyday life – another day with her. He bent his head, kissed the nape of her neck and then her shoulder savoring the sweetness of her flesh upon his lips.

She brought him a kind of peace and serenity that he had forgotten existed. Took him away from his present day reality and brought him back to a part of himself that he had buried under layers of life such as it was. She reminded him of life as it could have been, could still be. Reminded him that there was a simpler side to life. Simple pleasures. Moments in which to breathe freely again.

She shunned the club lights in favor of little known cafes with good food and yet to be discovered jazz soloist singing smoky throated lyrics over melodic piano notes. Her favorite hotspot was the courtyard of the Freer gallery on a warm, sunny afternoon and her bistro of choice was her own tiny kitchen. All she needed was a recipe, a basket of ingredients fresh from the Saturday morning market and at least one dining companion. Going out was fun but she preferred to dance barefoot at home amongst friends where there was no dress code, the drinks were free flowing and everyone was a VIP. The only ‘stars’ at the parties she liked to attend were the ones reflected in the calm, dark waters of the Tidal Basin where she liked to walk on balmy Summer evenings. His hand encircling hers as they quietly strolled along, no words needed.

Their grand Saturday night plans had been cancelled due to the weather and he knew that though she hadn’t said a word she had been thrilled. The saucy little black dress hung in his closet still in plastic fresh from the cleaners, beneath it the towering black pumps bought to go with it. She had gladly traded them both for one of his tee shirts and a pair of heavy socks. She’d made quiche’ and a warm salad for dinner followed by a rustic apple tart and old movies watched while curled up on the couch.

Kisses, touches, whispered words that evolved into lovemaking that lasted for what seemed an eternity. She was insatiable and he could not refuse her, nor did he want to. In the quiet of the aftermath she had lay beside him, cradled in the crook of his arm. Her slender fingers meandering slowly across his chest tracing unseen patterns. He’d opened up to her. He’d talked as he never had before and she listened, never interrupting – just listened. When the words stopped coming and he had emptied himself she began to kiss him softly wherever she pleased as if trying to kiss each wound and make them go away and then she had loved him again. This time it was as if something had broken free within him and he was awash in emotions which he released physically through her until he was too weak to give anymore of himself to her.

And she’d received him, every little bit, every piece, every part of him. All that he gave, whether gently or forcefully. She rode the wave of his release and when he was done allowed him to lay spent, body drenched with sweat upon her breast. Allowed him to rest upon her, arms clenched about her, holding her tightly lest she float away. She’d stoked the back of his head, kissed his forehead, tenderly murmured words of comfort to him until he finally drifted peacefully off to sleep.

Sunday there had been unexpected work to attend to and she had let him be for the most part. Interrupting him only to make him eat, take his meds, kiss her eyelids. She cooked, wrote, read the paper, napped on the couch, had calmly put their time together on hold while he answered the world’s call.

Dinner, more talking, more movies, hot chocolate and profiteroles, slow dancing in the dark. Pillow fighting, tickling her until she laughed so hard she couldn’t breathe. Watching old and new school cartoons until the wee hours of the morning and then once again making love as the snow fell.

Now she stretched and yawned then turned herself over to face him. She looked at him through a sleepy gaze, smiled slightly and pressed herself against him before closing her eyes. “Again” she whispered softly, burrowing her face into the curve of his neck.

In the night there had been promises of a massage, Fejioada, a game of Monopoly and maybe, just maybe a snow ball fight. Eventually the day would have to end, she would gather her things and he would have to take her home. They would both have to return to reality and the more complicated side of life. The snow would melt and their brief period of hibernation would be over. The world would be waiting.