Only in America can the lecherous leanings and extra-marital shenanigans of a dirty old man result in ratings gold and a national conversation.

The David Letterman Show scored its highest ratings yet as he aired his sexual proclivities in public under the guise of apologizing to his wife for betraying her with a variety of casual sexual partners. Partners, who, by the way, could have lost their jobs on Letterman's whim if they somehow displeased him. Or if Letterman ran out of Viagra.

Under the new rules implemented by self anointed elites, if a person is a celebrity, the normal rules of decent conduct are suspended. Unless, of course, the celebrity is a conservative. If only Senator "wide stance" Livingston were a Democrat, he'd have a restroom named in his honor. And probably his own personal peephole to boot.

Instead, as a member of the left, Letterman is accorded membership in the most valued and largest growing group in America. He is now an official 'victim.' And shame on those little tarts who used him in order to advance their own careers or merely to scratch a transient sexual itch.

Letterman's only sin appears to be his timing. He should have waited another week or so before stealing the headlines from pedophile rapist Roman Polanski. Whoppi Goldberg was right in the middle of convincing America that rape isn't rape and Hollywood had already garnered over 100 celebrity signatures calling for his release before Letterman rudely shifted the national conversation to his own sexual peccadilloes. Poor Roman.

The groundswell of elite support in favor of excusing Polanski for drugging and raping a 13 year-old girl 30 years ago could very well have resulted in freeing Polanski. Now, the fickleness and short attention spans of elite leftists may mean that Polanski may actually have to face the consequences of his past actions, instead of just getting his own star on Warsaw's 'walk of fame.' Life just isn't fair.

Former Boy President Bill Clinton can attest to that. After all, even though he was re-elected President after he made his historic seminal deposit on intern Monica Lewinsky's blue dress, he knows in his heart that the all the fuss was merely the result of a vast right wing conspiracy. The same right wing conspiracy that is now demanding that Roman Polanski be held accountable for the crime of which he was convicted. What meanies!


The vast right wing conspiracy just doesn't get it. Sex, anywhere, anytime, and with anyone, is now defined as 'empowerment.' Parading naked through the streets of San Francisco as cops stand idly by is considered a right. A right exclusive to gay men, but a right, nonetheless.

Pesky conservatives are only showing their ignorance when they object to the public swapping of spit between two men, or the sexual harassment of sweet young things by powerful men. And dirty old men have the right to express themselves sexually and publicly, without censure. As long as they continue to parrot the leftist agenda, that is.

I wouldn't be surprised if Obama's advisors are currently suggesting that he engage in sex with a subordinate. After all, that would immediately shift the nation's attention to the left's favorite topic instead of focusing on why Obama is ignoring our young fighting men in Afghanistan. But maybe, just maybe, Obama is more scared of Michelle than he is of the vast right wing conspiracy and the Taliban. Ya think?


Nancy Morgan is a columnist and news editor for RightBias.com
She lives in South Carolina

Permalink Reply by funesthememorious on October 8, 2009 at 4:49am
Yeah, it is. And lest we forget. 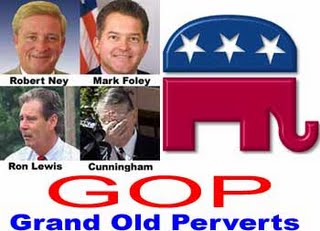 Permalink Reply by ZenDog on October 8, 2009 at 5:18am
Hey, which of these guys got busted soliciting in the men's room at the airport? Just curious . . .

Permalink Reply by Brian on October 8, 2009 at 9:03am
Oh, come on. Give equal time to the Democrats! This is one area where there is true bipartisanship in our illustrious congress.

Permalink Reply by funesthememorious on October 8, 2009 at 6:22am
No nattering nabobs of negativism either, damn it.

Jeeeez, Funes, for a minute I thought you were going to do your Henny Youngman impressions. "Take my wife...please!"

Permalink Reply by Chez moi on October 8, 2009 at 2:05pm
"As a columnist and news editor for rightbias.com are you actually promoting your product here rather than engaging in the types of communication that are what a social networking site is about?"


Give this gal a box of Crackerjack, she wins the prize!

Permalink Reply by funesthememorious on October 8, 2009 at 9:07am
You can spell Cardan? Nice to hear the viewpoint from a rational, clear thinking, non judgemental fellow.

The blog is all over the map, logically incomprehensible. There are fallacious arguments, specifically spurious similarity, argument from authority, and causal reductionism.

Permalink Reply by kainsworth on October 8, 2009 at 6:56am
Really? Only in America? You haven't been to many other countries, have you.