Thomas Hardy- on the loss of the "Titanic" 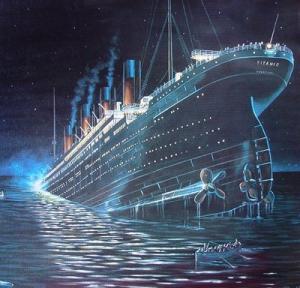 The Convergence of the Twain

(Lines on the loss of the "Titanic")

In a solitude of the sea
Deep from human vanity,
And the Pride of Life that planned her, stilly couches she.

Over the mirrors meant
To glass the opulent
The sea-worm crawls -- grotesque, slimed, dumb, indifferent.

Jewels in joy designed
To ravish the sensuous mind
Lie lightless, all their sparkles bleared and black and blind.

Dim moon-eyed fishes near
Gaze at the gilded gear
And query: "What does this vaingloriousness down here?". . .

Well: while was fashioning
This creature of cleaving wing,
The Immanent Will that stirs and urges everything

Prepared a sinister mate
For her -- so gaily great --
A Shape of Ice, for the time fat and dissociate.

And as the smart ship grew
In stature, grace, and hue
In shadowy silent distance grew the Iceberg too.

Alien they seemed to be:
No mortal eye could see
The intimate welding of their later history.

Or sign that they were bent
By paths coincident
On being anon twin halves of one August event,

Till the Spinner of the Years
Said "Now!" And each one hears,
And consummation comes, and jars two hemispheres.