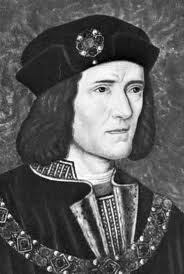 Now is the winter of our discontent

Made glorious summer by this sun of York;
And all the clouds that lour'd upon our house
In the deep bosom of the ocean buried. (Richard the III, Act I, Scene I)

Has been found, Richard's head and body that is, buried in what is now a parking lot in the city of Leicester in the middle of England.

Richard was killed in the battle of Bosworth Field and his death ended the English royal civil war between the Lancasters and Yorks with a Tudor victory and a threshing in history as vile, ambitious, scheming to the throne, killing his nephews and then getting his just desserts.

A horse, a horse, my kingdom for a horse! (Richard the III, Act 5, Scene 4)Richard cries in Shakespeare's account as deserted, desperate and soon to be dead king makes his last plea to the heavens.

And then to a parking lot in Leicester. Well, not a parking lot and that is the part of the story that was only recently reveled today. After the battle Richard was brought to be disposed of at an Abby which will was later destroyed by Henry the VIII in his removal of the monasteries as a part of his reformation orders, and a gain to the royal purse.

So, Richard the III was gone but not forgotten, as a new Tudor history was written by Shakespeare and others in the age of another Tudor, Elizabeth the I.

Now, that Richard has been dug up, so to speak, and now what to do with him?

Whatever happens Richard is a lesson in what royal was once like, messy, where the strong and the ambitious usually ruled, but not necessarily the longest. So, in Richard's case it may be as Shakespeare observed...

The evil that men do lives after them;
The good is oft interred with their bones.... (Julius Cesar, Act III, Scene II)

Comment by Maricel Evasco on February 4, 2013 at 8:08pm
I like "There are more things in heaven and earth, Horatio,
than are dreamed of in your philosophy."

As they say, "All's the world's a stage and the men and women merely players."  Act II, Scene VII As You like it.  Would that the historical characters of Shakespeare have spoken so eloquently in real life as the words the Bard put on their tongues.