That evening while checking tire pressure prior to starting the trip, I discovered that one of my rear tires had deflated down to 40 psi. It should have been 100 psi. So Tue morning it was off to a tire dealer who works on trucks and RVs. The repairman jacked the rear of the RV up and pulled the wheels on that side. It was discovered that the valve stem extender on that tire was leaking. So he tightened it up, aired up the tire determined that it was no longer leaking, and sent me on my way. So, after the brake and tire inspections I was on the road with a wallet that was about $350 dollars lighter.

That afternoon I stopped frequently and checked for overheating brakes and underinflated tires.

Stopped at a KOA near Tallihassee, FL for the night. Not a bad camp ground except for the fact that all the internal roads were dirt.

Wed morning I had the alarm set for 6:30. It was still very dark when the alarm went off. I got up and disconected the water and electric and took Happy for a walk. By the time we got back to the RV it had started raining.

Quckily organized everything and pulled out of the campground before the roads turned to mud. Drove to Gulfport, MS and went to the Navy base there to get a military sticker to put on the jeep. Then called a friend who was at the Keesler, AFB RV park and found out that they still had two open spaces. Drove back to Kessler and set up for the night. Had an enjoyable vist with my friend and turned in for the night.

Got up the next morning and after stopping at a Flying "J" truck stop for gas and propane headed west.

Called Kathy Arlene on the way and explained that I had reserved a spot in Traders Village in Houston and told Pru that I would be there Fri., so I need to motor on down the road. I'll try to stop and see Kathy and Mark on my way back through.

Spent Thur. Night at a very nice little RV Park near Iowa, LA. That is the home of the Rabbit Festival and it was scheduled for the weekend of 19,20 and 21 March. I was there one day too early to get a souvenir for Pru.

Got to Traders Village before the Fri traffic got too bad and set up.

Called Pru and we decided to go down to Galveston Saturday to check out RV Parks.

We had a nice drive to Galveston Sat. and found a RV park that I liked and I reserved a site for a month, starting on Fri. the 26th.

Sunday we went to see "Alice In Wonderland" in 3-D.

I spent Monday and Tue. working on the RV and playing on tbd. Tue evening my Son, Bryan arrived with his new English Bulldog. He is on his way back home after successfully compleating Unmaned Aerial Vehicle Pilot Training for the Army.

Wed. Bryan and I took the dogs and drove down to Galveston. We walked the dogs on the beach and drove around Galveston. Had an enjoyable visit. Bryan and his dog continued their trip back to VA on Thursday. I got up Fri morning and got ready to take the RV to Galveston. Checked the tire pressure and found that the same tire as before was very low on air pressure. While trying to figure out what to do, the guy parked next to me came over to say goodby. I told him my problem and turned out that he had an air compressor. We pumped the tire up and it seemed to hold air so I drove to Tiki Tom's RV park on Tiki Island near Galveston. Plan to stay here for a month. 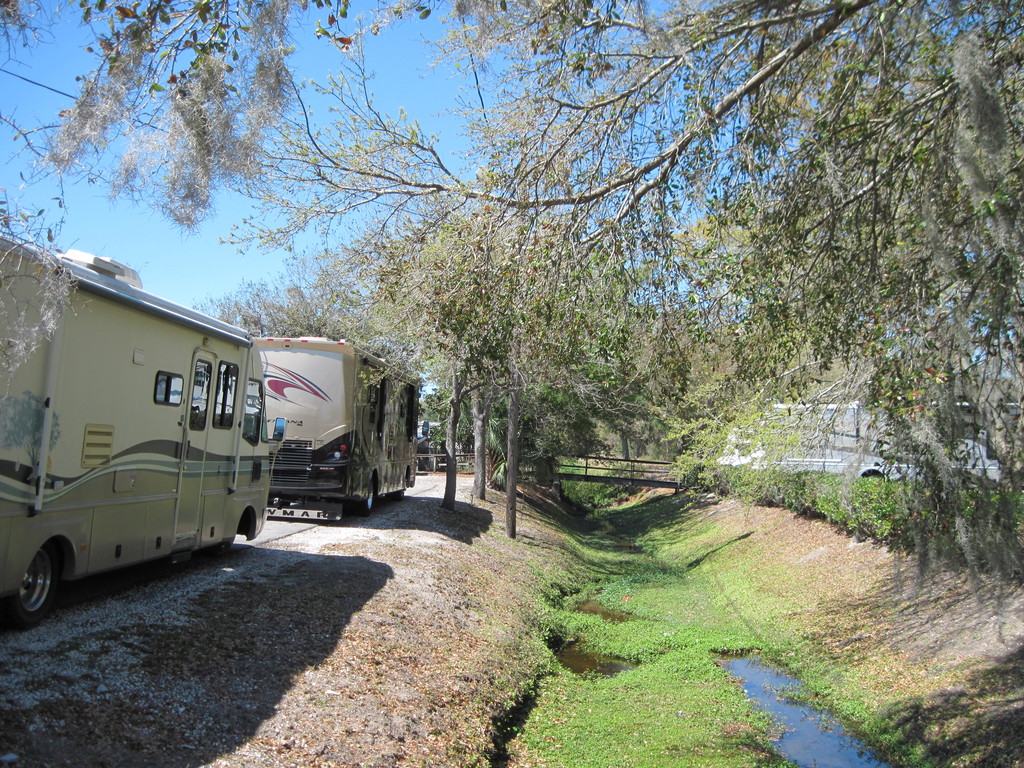 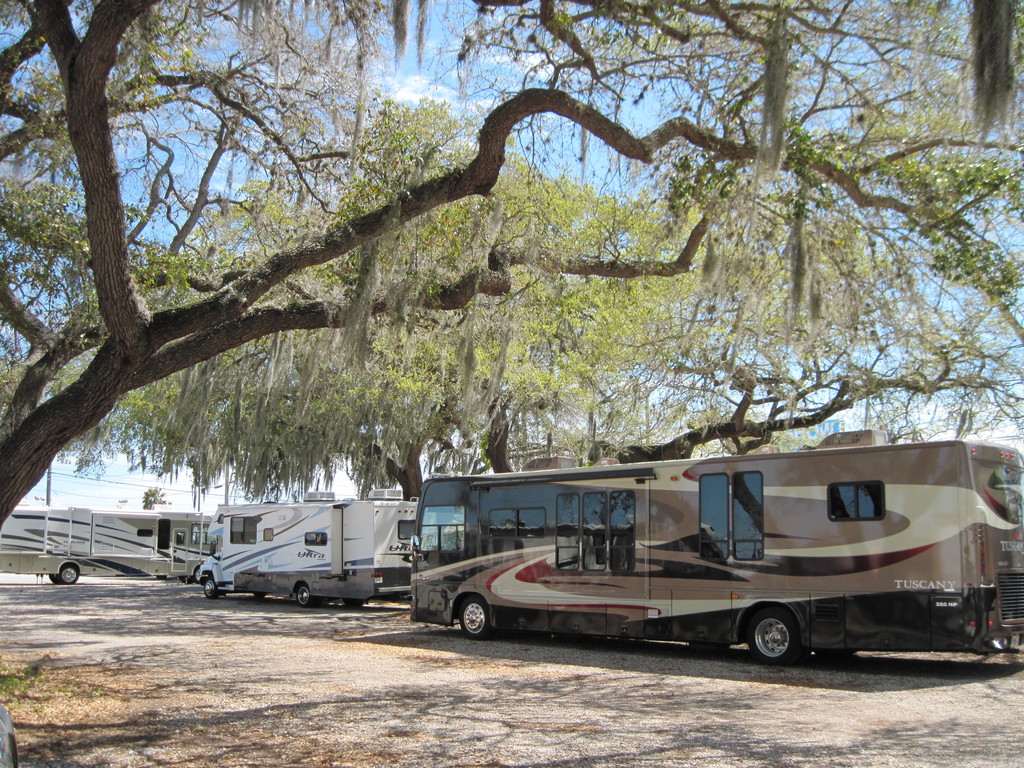 BRYAN, DOLLY AND ME 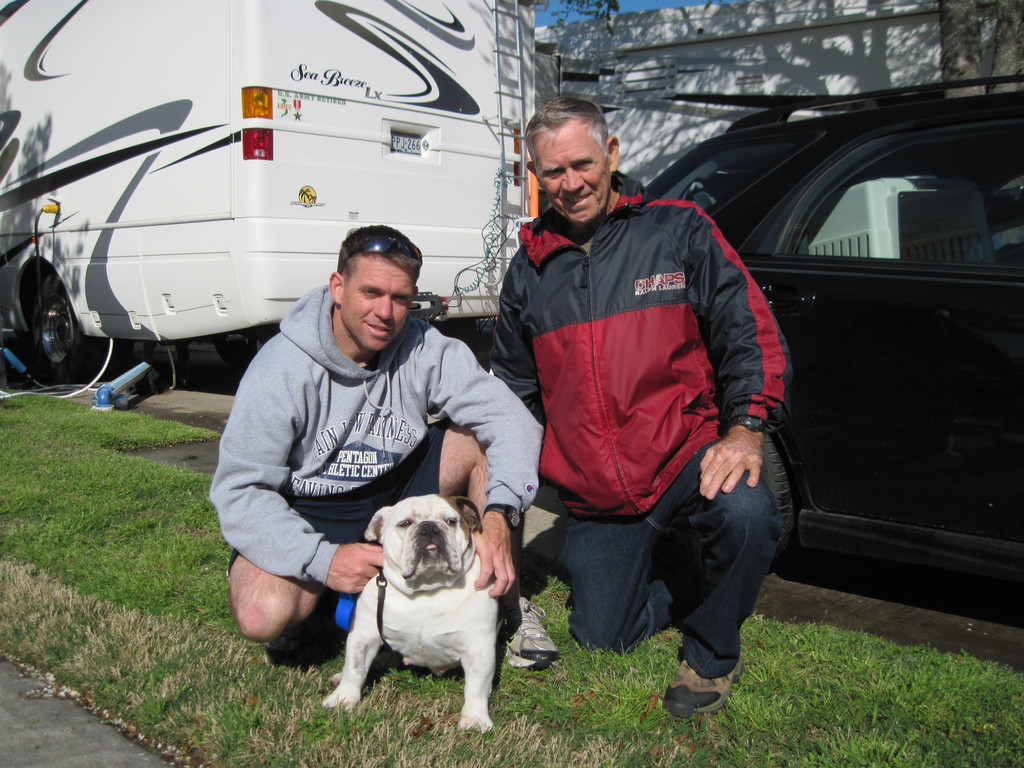 HAPPY AND I AT GALVESTON, TIKI TOM'S RV PARK. 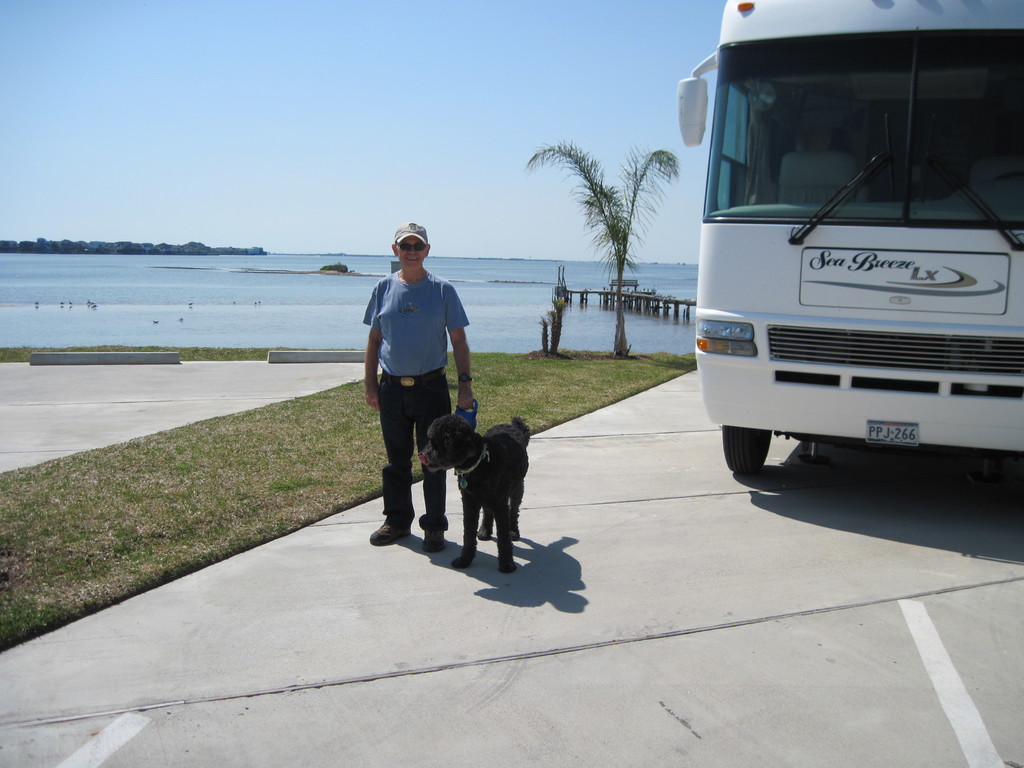 Comment by larry kremis on March 29, 2010 at 7:11am
Thanks Robbie. I enjoy living through your travel blogs. It doesn't cost me anything.

Comment by Kittycat on March 28, 2010 at 8:20am
Loved your post again, Robbie. Especially the pic of your son and dog. Isn't Galveston a great place? I went there for a day visit back in the early 90's and was really taken by the area.

Comment by Stir Young on March 27, 2010 at 6:05am
Hi Robbie! It irritates the heck out of me to hear about that leaking tire. Why in the heck couldn't the first guy correct, or at least correctly diagnose the problem? It seems like we get a lot of "band aid" fixes on our vehicles, and then sent down the road......let someone else deal with it later. OK rant over! LOL!

Those are some nice pics you posted, that weather looks so inviting. We're now in the "blah" portion of spring...everything is grey.

Oh, I was wondering, does Ms Farquar administer lots of kicks in person, or is that just part of her cyber-personality?

Enjoy your travels Robbie, and keep us posted.