The last blog was just after we arrived in Leesburg, VA. The Snow was deep, but most of the roads were plowed. And the ones that weren't plowed, the jeep handled with no problem. My son's flight from AZ got in late Sun night but it did arrive. On Monday,Tue, Wed, and Thursday I did my Christmas shopping and we put everything under the Christmas tree. Christmas eve we went to "NIDO'S" restaurant for a big dinner. This is tradition. We have done this every Christmas for 20 years. My Son, Bryan started working there when he was 16 and we started having Christmas eve dinner there. There were a couple times, Like when Bryan was in Afghanistan that one or two of us were missing, but the rest went. The owner even gives us a cake every year. Then we all went to my EX's Condo and opened presents. And ate and drank more. There were Ann(EX), I, Jay, (oldest Son) Vicki(Jay's Daughter), Bryan, (Youngest Son) and Kristina(Bryan's girlfriend). We had a great time.
I took Ann to the Airport the next morning and she flew to Austin to spend time with her Sisters. I visited with friends and the boys for the next 3 days.
On Monday Calligype and her family drove from Frederick, Md. to Leesburg and we had breakfast at IHOP. We had a fun visit and lots of good IHOP food.
Power girl and I met at an IHOP in Mobile, AL. Maybe we should see if they would sponser TBD meetings with free food.
Then Monday night I, Bryan, Kristina and Kristina's Dad, Oscar, all went to a professional Hockey game. The Washington Capitals Vs The Carolina Hurricanes. The Caps were in first place in the division and the Hurricanes were in last. Unfortunately for the Caps fans, the Caps did not play well and got creamed by the Hurricanes. It was a fun excursion for Oscar and I. Oscar nor I had ever been to a hockey game before so we enjoyed it even tho the Caps lost. I and Happy left Leesburg this morning, the 30th and headed South. Currently we are in a motel known up and down the East Coast as "South of the Border". Some of you readers may have stayed here. It has been here a very long time. Tomorrow I am going to drive down to Charleston, SC and hopefully meet Sandra Dee 1. Pictures Follow.

Happy Playing in the Snow 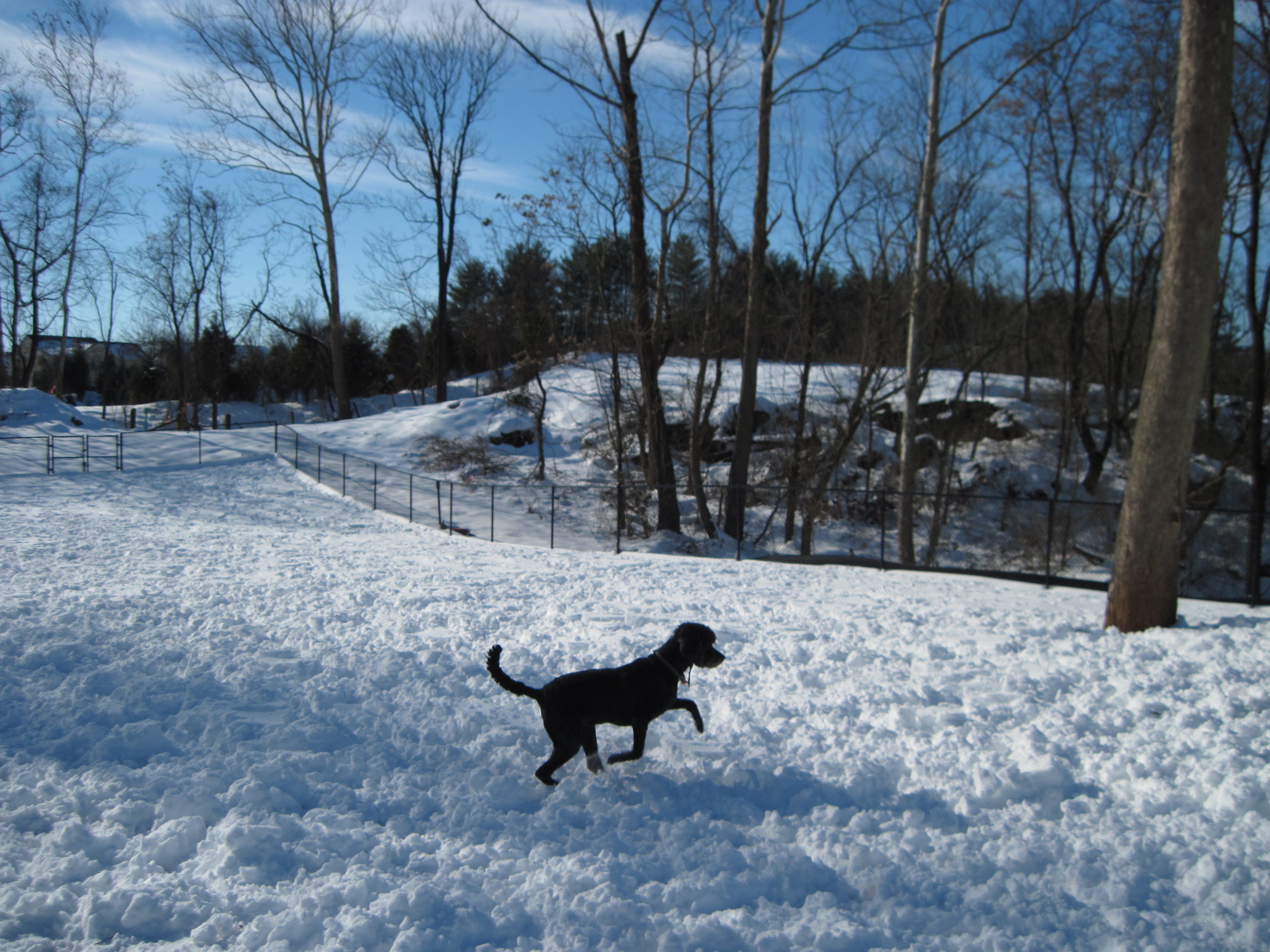 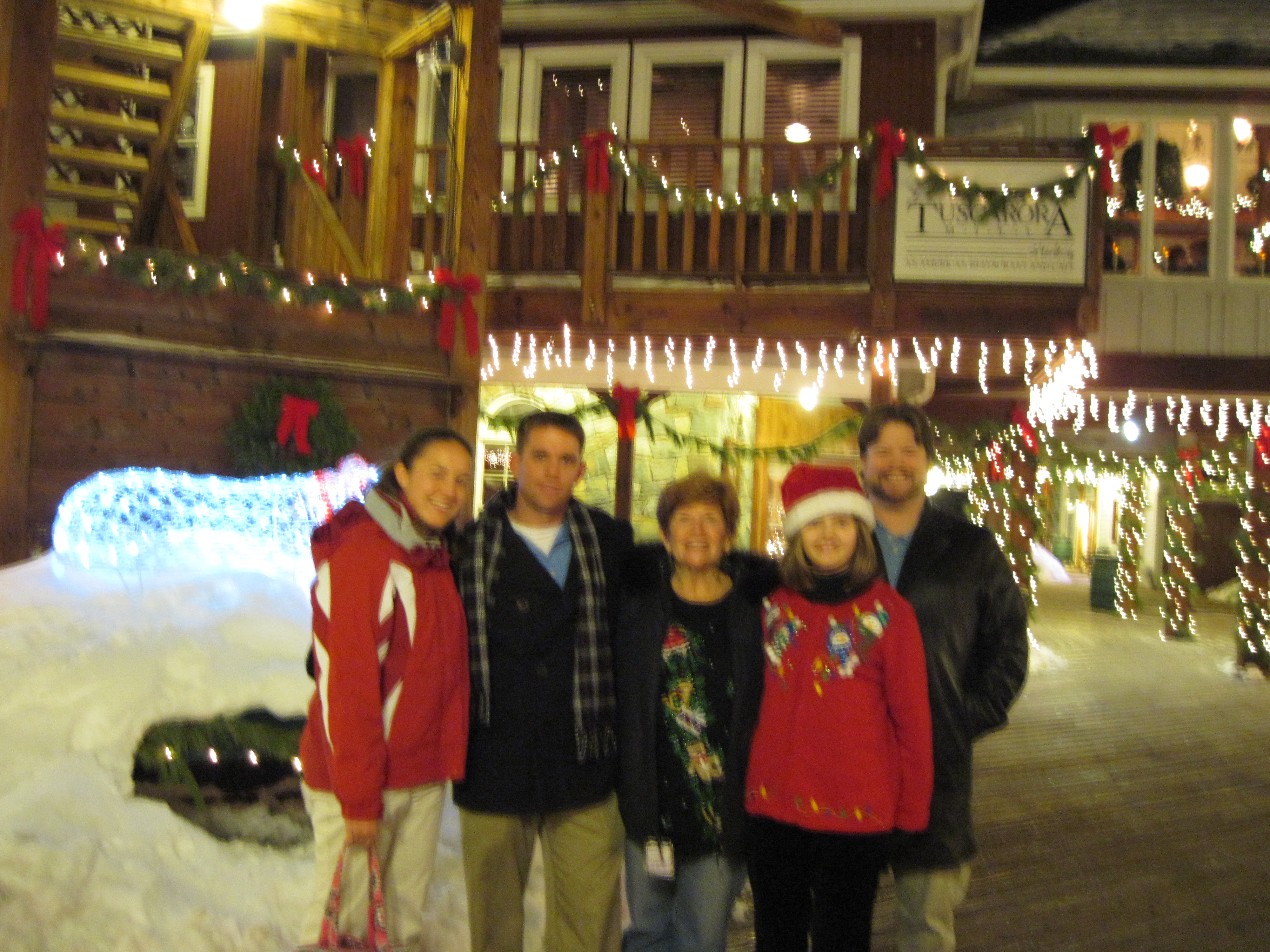 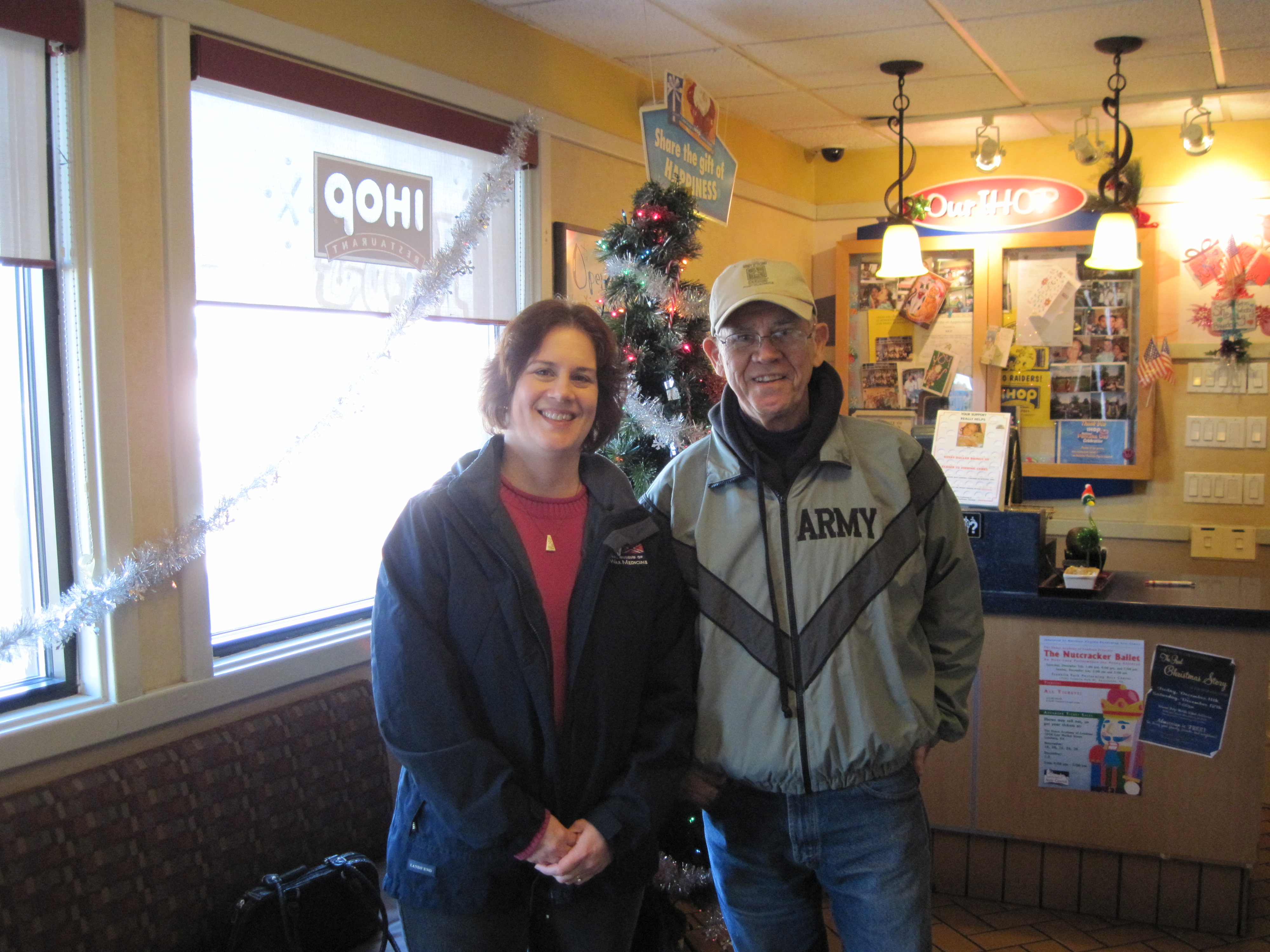 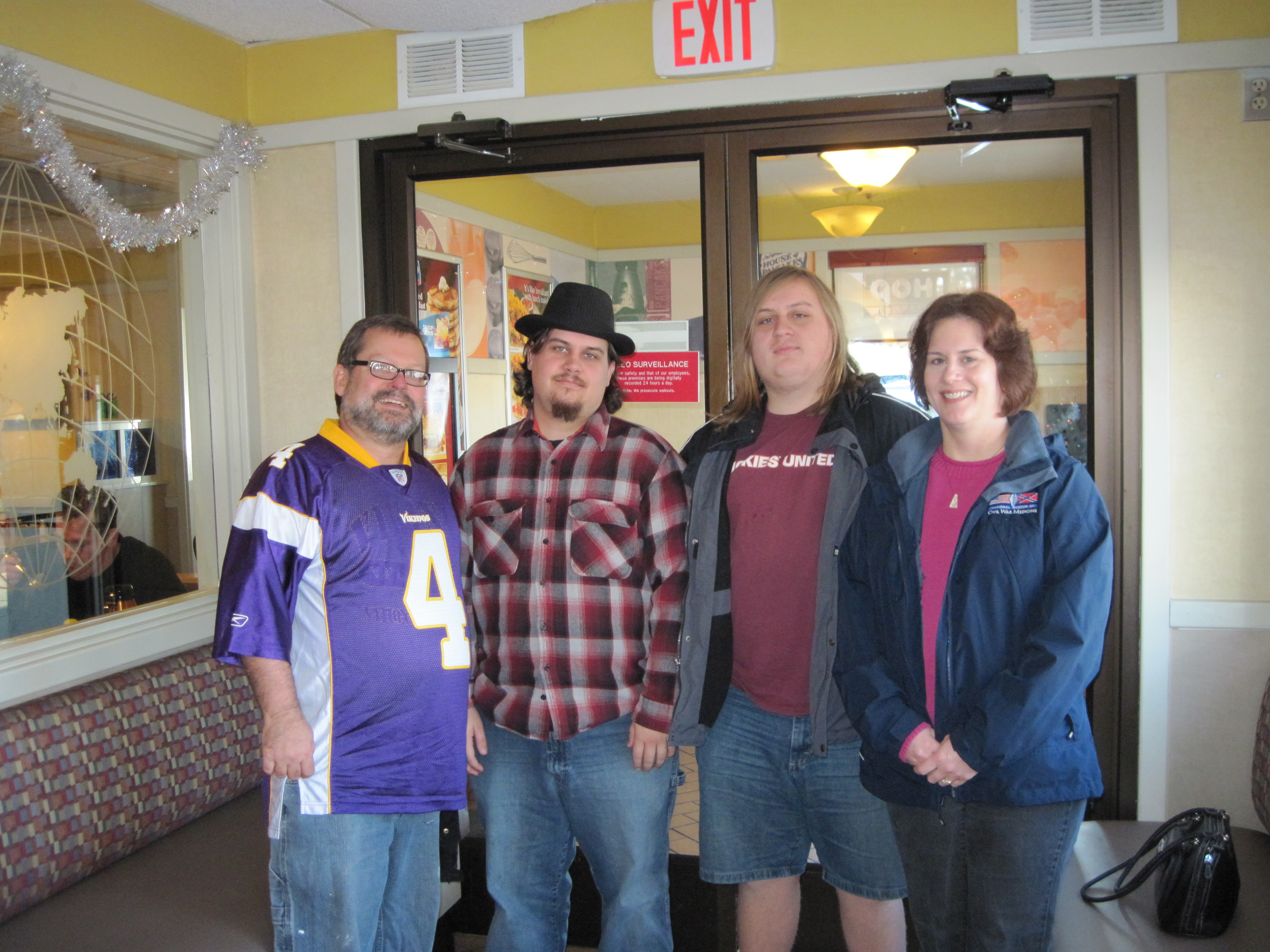 My Son Bryan and I at the Hockey game. Food and drink before the game 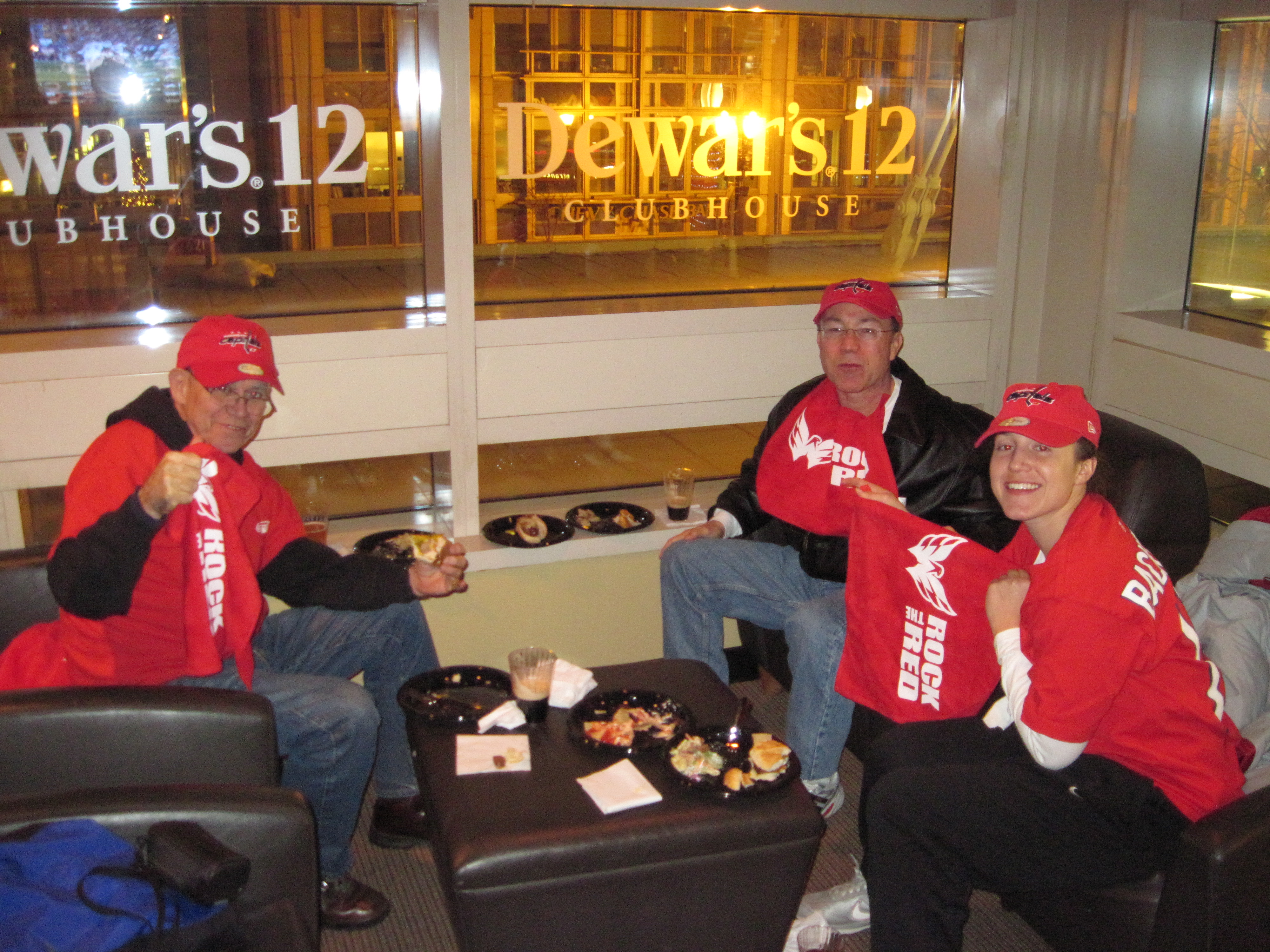 The game from our "Nosebleed seats I don't blame you for heading south to get to some warm weather. Give me a shout if you're back in this area again though!

Comment by stillgoing on December 31, 2009 at 5:11pm
Yeah Robbie, sounds like a great time. Safe drive down to the sunshine.

Comment by Dazzling Zoomer Gal Diana on December 31, 2009 at 1:43am
Short notice 'or these extremely busy days hindered our get on together dear one, much to our chagrin. We will make it SO upon your return. And that is a 'DAZZLING" promise dear one. Not forgetting the dog!
Safe continuation, and Happy New Year! from your "dazzy dooh" & "thee" ever so naughty TDS! xoxo