"Marie Uchatius, a young art-student, paid me a visit one day in the Hotel Majestic [in New York City]. Hearing a confused noise, we leaned out of the window and saw a long procession in the broad street along the side of Central Park [Fifth Avenue]. It was the funeral cortege of a fireman, of whose heroic death we had read in the newspaper. The chief mourners were almost immediately beneath us when the procession halted, and the master of ceremonies stepped forward and gave a short address. From our eleventh-floor window we could only guess what he said. There was a brief pause and then a stroke on the muffled drum, followed by a dead silence. The procession then moved forward and all was over.

The scene brought tears to our eyes and I looked anxiously at Mahler's window. But he too was leaning out and his face was streaming with tears. The brief drum-stroke impressed him so deeply that he used it in the Tenth Symphony."

The following video is an excerpt from Mahler's 10th Symphony that contains the muffled drum strokes that were inspired by the New York City fire fighter's funeral procession:

During the period 1993 to 2004 I worked on my book Significant Moments, an autobiographical work composed entirely of quotations from the published literature. So I was already at work on the book at the time of the terrorist attacks on September 11, 2001. The horror and anguish of that day impressed me so deeply that I used it in the book. The following section of the book is a creative transformation of my feelings, my emotional reaction to the events of that day.

For the purposes of this presentation I call the piece "The Portrait Artist." Wagner's step-father, Ludwig Geyer, to whom the young Wagner was deeply attached -- and who died unexpectedly when the composer was seven years old -- was also a portrait artist as well as an actor and playwright. During his sitting for Renoir, Wagner excoriated both the French and the Jews, about whom the composer had deeply-ambivalent feelings. Wagner may have suspected that his stepfather Geyer was a Jew. Did Wagner associate the Frenchman Renoir with the presumed Jew Geyer? In a historical novel one can always speculate.

Be that as it may.

The creative link between the 2001 terrorist attack and the material I was already working on was provided by an inspired piece of writing by Adam Gopnick that appeared in The New Yorker magazine in the year 2002: "The City and the Pillars." 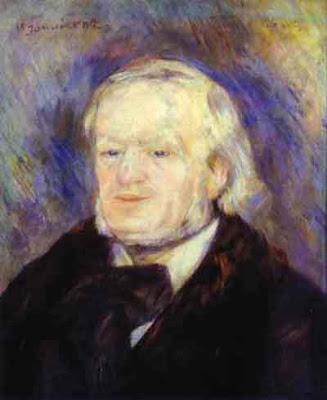 Albert Rothenberg, M.D. first described or discovered a process he termed "homospatial thinking," which consists of actively conceiving two or more discrete entities occupying the same space, a conception leading to the articulation of new identities. Homospatial thinking has a salient role in the creative process in the following wide variety of fields: literature, the visual arts, music, science, and mathematics. This cognitive factor, along with "Janusian thinking," clarifies the nature of creative thinking as a highly adaptive and primarily nonregressive form of functioning.

In the following text I have superimposed metaphors concerning the terrorist attacks on September 11, 2001.  I have included quotes from magazine articles specifically about 9/11 in addition to quotes from texts about war, destruction, physical injury, New York City, and the death of Wagner.  These quotes are highlighted.

In a sense, the following text takes us back to the time period immediately preceding a catastrophe.  Victims of trauma frequently go back in time in their minds to the moments preceding the trauma, as if to undo the trauma.

We know that these suspicions were the accusation that Hermann Levi was having an affair with Cosima Wagner. The charge was absurd, but talk of love affairs touched the Wagners at a sensitive spot.
Peter Gay, Freud, Jews and Other Germans.
Did Wagner for a moment look at both his wife, almost a quarter of a century his junior, and her special friend, the handsome, soulful Jew, two years younger, and, remembering her vagabond nocturnal habits at Villa Pellet, wonder whether he had finally been cast as . . .
Robert W. Gutman, Richard Wagner: The Man, His Mind, and His Music.
. . . Poor Potiphar!
Thomas Mann, Joseph and His Brothers.
When Levi sat silent at lunch, "profoundly upset and indignant," Wagner, whose sadism was evidently not yet sated, asked him why he was being so quiet. Levi . . .
Peter Gay, Freud, Jews and Other Germans.
. . . holding out the letter . . .
Hugo von Hofmannsthal and Richard Strauss, Arabella.
. . . replied that he could not understand why Wagner had not simply torn the libel up without showing it to him. Wagner's response was shrewd but is suspect: "If I had shown the letter to no one, had I destroyed it, perhaps something of it would have rankled within me. But now I can assure you that not the slightest memory will remain with me." Abreaction, we know, is a satisfying form of discharge; abreaction at the expense of another must have been doubly satisfying.
Peter Gay, Freud, Jews and Other Germans.
How did all this affect me? Any extensive comment would be superfluous and banal; I was, to put it tersely, enveloped in an aura of hatred and dismay.
Peter Gay, My German Question: Growing Up in Nazi Berlin.
It is, of course, rather more an observer’s than a participant’s tale
Lucy Beckett, Richard Wagner: Parsifal.
And yet the fact remains, . . .
Mark Twain, A Connecticut Yankee in King Arthur’s Court.
. . . I had the misfortune to witness such a scene.
Arthur Rubinstein, My Young Years.
Paradoxically, my baggage of atrocious memories became a wealth, a seed . . .
Primo Levi, The Periodic Table.
. . . a motivation to create . . .
Albert Rothenberg, Creativity and Madness.
. . . and it seemed . . .
William Faulkner, Light in August (Chapter 19).
. . . it seemed to me that, by writing, I was growing like a plant.
Primo Levi, The Periodic Table.