Is Phil Mickelson an ingrate?

I drove over to the golf course and played a round yesterday, as I do twice a week. I paid my green fee and enjoyed about 4 hours of bright sunshine, conversation and competition with my fellow retirees. I thank God for the days I have left to play golf and try to enjoy my life. But while I was doing that, the news was filled with the complaints of golfer Phil Michelson about the exorbitant taxes he has to pay as a resident of San Diego. http://msn.foxsports.com/golf/story/phil-mickelson-says-tax-talk-in... He makes $47 million a year but pays a rate of about 63% on his taxable income. This has been caused by tax increases at the federal, state and local levels. He has apologized for being insensitive but will probably join thousands of wealthy individuals who will exit the state of California for more tax-friendly environments. A large number of the professional golfers live in the Orlando, Florida area, including Tiger Woods. Florida has no state income tax and Orlando no city tax.  I live about 50 miles away.

The past four years has seen the advent of the Taxed Enough Already party, complaining about increasing taxes. Their influence waned a bit in the last election but they are still a powerful force. Our federal government is sadly in debt to the tune of over $16 trillion and many states are underwater despite balanced budget amendments. The solution is either to cut back on spending or to raise revenues. But raising taxes has its drawbacks and doesn't always raise revenues.

I would imagine that most of the nation's income earners making over $400,000 a year are looking at ways to offset the 4.5% tax hike they will have starting this year. You can rest assured that CPAs and lawyers will find a way. Companies have found ways to pay zero taxes with all kinds of loopholes. Other businesses re-locate off-shore.

Tocqueville, the Frenchman who assessed the American democratic system, observed that a simple vote system of making decisions could end up being a “tyranny by the majority.” It's easy to say, “Let's tax the rich” but many countries that tried this (Sweden is an example) had the rich all move away. Right now the wealthy French are scurrying to get out of the country as the legislature has passed a 75% tax rate. I understand that former French President Sarkozy is one of them.

I pay my taxes every year and never question the total my H&R Block software says I owe. I'm not going anywhere although I did take advantage of the lower local taxes in Florida from my former Ohio home. But I would like to see the government look to cut back on expenses from time to time and not always be raising taxes.  I wonder if this a productive way to increase revenues?

I take it this is supposed to depict where Phil Mickelson feels the pain. 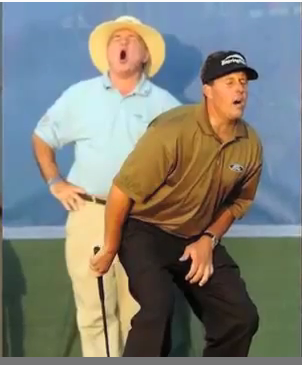 Unfortunately, Phil is in that silent majority of people who earn over $400k a year.  The mainstream press want to make Bill Gates and Warren Buffet into heroes for volunteering their hard earned income to support our spending habits.  If you ask most people if they think they pay too much or enough in taxes, they will say "yes".  If they say "no", they are most likely being intellectually dishonest.  Class warfare has been at the root of many US political debates and can be a ally to politicians who want votes.

There is no question that many of us would like to earn a living hitting that white pill around the lush countryside.  I have always paid for the privilege.  But Mickelson has groomed the talent God gave him and appears to be generally a good guy.  One would think that at a minimum you could keep half of what you earned as after all you did earn it.  But that is only true if you live in a lower taxed state like Florida or Texas.  California has some serious budgetary problems.  And of course, the poorer populace will vote themselves benefits and expect someone else to pay the bill.  Some of the benefit programs are legit and some are questionable.  I don't know the answer and obviously a host of politicians in California don't either.

As a person who only gets paid when the public is willing to shell out its recreation dollar to watch him play, I would expect he would stay away from the politics of public funding for fear of offending any of his audience and fans.  In private he can lament the state of fiscal responsibility in America and California, while he signs autographs.

it is the French it is always the French, or in this case should it be, Da! monsieur.  There are always the Russians, a banana republic of the 21st century, and a great tax get way.

Yes, Mickelson could always play the Russian tour,I suppose, and save on taxes but why? Yes, he is a lefty, but then again what does the Russian tour pay?  Nada, or something like that.

Nope, it is likely Phil is going to have to grin and bear it, paying something for the privilege of being in the good, old USA. As to where Phil would rather have has tax haven, he could always use the Cayman Islands, and become a Brit.

Oh, wait, the Brits also confiscate income. So, it has to be Texas Republic or Florida and note to Phil, keep mouth shut, it only hurts the image.

And otherwise, how about dealing with those yipes in major tournaments....