Recently on Face Book I left a group after my opinions were constantly made fun of because I did not see things their way.  Why can't we agree to disagree and let everyone express their opinions on a subject. It gets boring to me to preach to the choir all the time. Politics? Religion?  Anything. Post a agree to disagree picture or story here. Sort of...But some families truly love to argue - It's practically the reason for their existence. Spirited debate can be just as much a glue that holds a family together as much as warm conviviality. It can show a dignity and a respect for your opinions, as well as an admiring expectation that you be able to hold your own out in the real world, where a lack of dignity, tolerance and respect are to be expected.

"Family" doesn't always mean - or have to mean - Happiness, comfort and cozy agreement. Some families could even be regarded as so dysfunctional and toxic that they wound up serving as a necessary launching pad to greatness, as the catalyst for escape and the solidification of personal integrity.

That said...I've certainly noticed a propensity for two-facedness amongst evangelistic and conservative prosletyzers. They have their discreet little groups here and on other social sites, and are generally left to them - But they see nothing wrong with frequently barging into the groups of opposing opinions and starting trouble; Usually while wrapping themselves in the flag or scripture or some other self-righteous rationalization for their belief that nobody is allowed to disagree with them. And, of course, express outrage when someone of the other camp dares to walk into their own little clan councils and return the favor, as it were.

You're never going to get rid of the idiots who see the shunning and expulsion of different ideas as proof of their own moral superiority. Whenever one collides with some of that kind of intolerance, it's generally best  to see it as an example of the human propensity for bullshit and righteous hypocrisy.

I agree with Snagg and Kooner.  In my opinion the hypocrisy can be on all sides.  This discussion is so people can express their opinions about anything. We can respond by saying first agree or disagree. I f you want to put your reasons, great. I hope we can all be what I think we can be--open to other opinions whether or not we feel the same.

Most often friends seem to get to know me better than family.  Maybe its my fault, I do not know why. Also other young people will tell me they like talking to me,  that I'm cool.  Me?  My grown children have always thought they could not talk to me.  Why?, probably because years I was too wrapped up in every day problems to be cool.

I know also Religion and Politics are two subjects that can lead to blows.. My suggestion is to let posters post their views,  decide if you agree or disagree, but no attacking.  Let's just share our opinions freely.

Aww, where's the fun in that ? 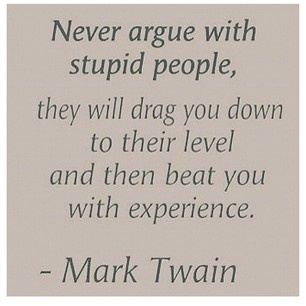 Its hard not to respond to what we feel are stupid people.  Hold onto your own mindfulness and chalk the stupids  to just that -stupidity.

Yeah, humans seem born to argue, sigh.  For years I've been telling people that I'm not creative at all--in recent years I've been using the phrasing "I was born without the creative gene"--& oh boy, have people argued with me:  "Oh, no, no, no; you are too creative; everyone is creative!  You just need to get busy & find out what your creative AT!"  (Like I need something else to "get busy" with, I don't already have enuff sh*t to do I can't stand, sigh, whatever.)  Well, guess what:  it seems that maybe, just maybe I was right all along; seems to me that it's been pretty well demonstrated that at least some of the people on the Autism Spectrum (incl. Aspergers which I definitely think I am) in fact are not creative in the usual sense of the word.  In fact, some kids with Aspergers or high-functioning Autism, when told to write a story as a creative exercise for English class or whatever, had trouble grasping the assignment:  "what do you mean write about what I'd do if I had a million dollars?  I don't have a million dollars."  "Pretend that you have a million dollars & write about that."  "Pretend?  You mean lie?!"  LOL, that remind me of me trying to do those creative writing assignments in English class all those years ago.  Oh, well.

You know Kooner , once I was writing a true story and tried to change the names.  I just couldn't relate to those false names. To me the characters were the real people I was writing about.   But to protect the identities I did it but had to rely on my notes when it came to typing the false names otherwise the real name would by typed.

About the sex part, anyway.

Sex is VERY real - Unlike most political and religious concepts.