Snooping at Letters of the Famous 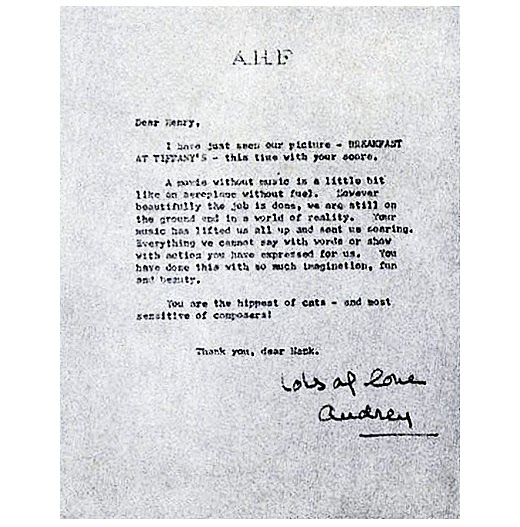 I have just seen our picture – BREAKFAST AT TIFFANY'S – this time with your score.

A movie without music is a little bit like an aeroplane without fuel. However beautifully the job is done, we are still on the ground and in a world of reality. Your music has lifted us all up and sent us soaring. Everything we cannot say with words or show with action you have expressed for us. You have done this with so much imagination, fun and beauty.

You are the hippest of cats – and the most sensitive of composers!

I do not read a lot of Stephen King as he scares the life out of me.

We know this one is to, not from, a famous author, but we just couldn’t resist — plus, Agnes is basically Catherine Bakley. Hemingway met her in Milan during WWI, after he was taken to a hospital where she was serving as a nurse. He wanted to marry her, and though she refused (partly because he was 18 and she 26!), he kept on writing her. This was Agnes putting her foot down.

I am writing this late at night after a long think by myself, & I am afraid it is going to hurt you, but, I’m sure it won’t harm you permanently.

For quite awhile before you left, I was trying to convince myself it was a real love-affair, because, we always seemed to disagree, & then arguments always wore me out so that I finally gave in to keep you from doing something desperate.

Now, after a couple of months away from you, I know that I am still very fond of you, but, it is more as a mother than as a sweetheart. It’s alright to say I’m a Kid, but, I’m not, & I’m getting less & less so every day.

So, Kid (still Kid to me, & always will be) can you forgive me some day for unwittingly deceiving you? You know I’m not really bad, & don’t mean to do wrong, & now I realize it was my fault in the beginning that you cared for me, & regret it from the bottom of my heart. But, I am now & always will be too old, & that’s the truth, & I can’t get away from the fact that you’re just a boy – a kid.

I somehow feel that some day I’ll have reason to be proud of you, but, dear boy, I can’t wait for that day, & it was wrong to hurry a career.

I tried hard to make you understand a bit of what I was thinking on that trip from Padua to Milan, but, you acted like a spoiled child, & I couldn’t keep on hurting you. Now, I only have the courage because I’m far away.

Then – & believe me when I say this is sudden for me, too – I expect to be married soon. And I hope & pray that after you thought things out, you’ll be able to forgive me & start a wonderful career & show what a man you really are.

Nin had an affair with Baldwin while both were married, and went on to publish a book of his poetry. Eventually, Baldwin balked at the deception, and went back to his wife and children. He responded to the following letter by writing that Nin was “a kind of dog in the manger with men. You want them all to sit at your feet and be yours, all yours and only yours.”

My poor Lanny, how blind you are! A woman is jealous only when she has nothing, but I who am the most loved of all women, what can I be jealous of? I gave you up long ago, as you well know, also I refused you the night you wept-I only extended the friendship as I told you then until you found what you wanted-When you did I withdrew it merely because I have no time for dead relationships. The day I discovered your deadness-long ago-my illusion about you died and I knew you could never enter my world, which you wanted so much. Because my world is based on passion, and because you know that it is only with passion that one creates, and you know that my world which you now deride because you couldn’t enter it, made Henry [Miller] a great writer, because you know the other young men you are so jealous of enter a whole world by love and are writing books, producing movies, poems, paintings, composing music.

I am in no need of “insisting” upon being loved. I’m immersed and flooded in this. That is why I am happy and full of power and find friendship pale by comparison.

But in the middle of this fiery and marvellous give and take, going out with you was like going out with a priest. The contrast in temperature was too great. So I waited for my first chance to break-not wanting to leave you alone.