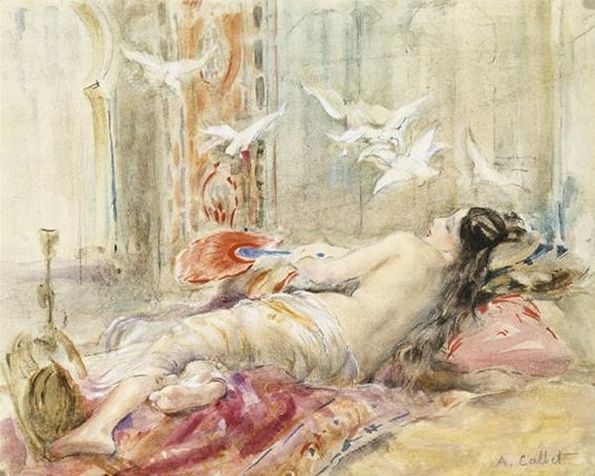 The enticing fragrant aroma of lavender brought pleasure to Joseph's senses as Hildreth glided past. He succumbed to the pleasurable sight of the sprigs of Hidcote lavender with it's delicious deep dark lavender color in her beautiful long curly blonde hair. The sight of Hildreth,his wife of ten years,still drove him wild with passion.
Joseph knew exactly where she was going even tho' she turned slightly, with a come hither look, as she walked down the chalky earthen path to the aromatic lavender fields. He knew when he saw her large gathering basket that she was on her way to The Munstead Gazebo to collect more lavender flowers to dry for the making of her famous Lavender Jelly. She made it in single batches and each batch called for one half cup of dry lavender blossoms. She would have to pick many blossoms to make this quota.
The Munstead Gazebo was huge and well covered from the elements because of the nude drawings set in frames lined the walls. The Munstead men all were very talented artists. They all made a nude drawing of their wives at some time in their lives and each drawing was framed and placed on the gazebo walls.
Great great grandfather Michael Munstead started this tradition by drawing his wife Bethany Smith Munstead . His drawing still ruled as the best drawing because of her small rounded features and full red lips. Her hazel eyes enticed you to look,not at her nude body with the yellow scarf across her waist, but to her sparkling intense eyes.
Some would say they were a golden green while others will say that the eye color is more of a brown with a touch of gold. No mater what they all agreed Granndma Bethany's eyes were most attractive and appealing to every man in the Munstead family.
The lavender fields were such a romantic place that just the sight and smell of the Hidcote and Munstead colorful lavenders would flare the nostral into a pure estacy of fragrance. Joseph followed his wife with a quiet cat-like stalk to his gate. He did not want her to know he was behind her watching for the moment he might catch her for his drawing. He had to slow his long legs down. Hildreth quickened her step and since she was small she slipped in behind a small unused path where the lavender was tall and thicker.
She waited for Joseph to pass by hoping he had not noticed where she had gone. Then she ran as fast as her small but muscular legs could go off to the gazebo.
Once there she slid off her long white dress and using it as a pillow she lie down next to a row of deep red-maroon lavender. then she wrapped her waist with her blue velvet sash just so enough of her was covered to allow room for the imagination. Slightly above her waist she placed her arm on the ground but with her right hand touching her breast bone and one full breast peeking. She closed her eyes half way and opened her lips ever so slightly. The stage was set and she listened for Joseph. She heard him sigh and knew he was at his sketch pad.Joseph drew with awe and amazement the reclining position of his wife. He drew swiftly many sketches as he was overcome with more lust than ever in their ten years together. He thought he saw her tongue move but it was his it was his own intense passion and desire that was moving for Hildreth.
Once finished sketching he went to her with open arms and heart.
Three hours later they were seen walking up from the lavender fields side by side. She with her basket of lavender and he with his sketch pad.
A month later another nude Munstead drawing hung in the gazebo.
Great great grandpa now had competition for all that gazed upon Hildreth had a hard time taking their eyes off her slightly open full lips.
..........Julia A Knaake
* dedicated to my friends Joseph and Hildreth who are not with us anymore

yes I would love to be painted similar to that photo

but no birds flying over my head please

Now remember NOT to drive in a lavender filled truck with the windows closed and fall asleep at the wheel!

Im off down the shops to buy some Lavender

Lavender fields at indeed beautiful, the aroma overwhelming, seen many n Idaho where I used to live.

thank you it was a story of the love

between a husband and wife

It is true that i do love lavender

did you know you can eat it too

often I sprinkle it on scrambled eggs

and I stuff it in clothing put away in boxes

instead of those toxic mothballs