A ringer is a horse substituted for another of similar appearance in order to defraud the bookies. This word originated in the US horse-racing fraternity at the end of the 19th century. The word is defined for us in a copy of the Manitoba Free Press from October 1882:

"A horse that is taken through the country and trotted under a false name and pedigree is called a 'ringer.'"

It has since been adopted into the language to mean any very close duplicate. As a verb, 'ring' has long been used to mean 'exchange/substitute' in a variety of situations, most of them illegal. From the same period is the term 'ring castors', meaning to surreptitiously exchange hats. Castors, or casters, were hats made from beaver fur. From the 20th century we have the Australian phrase, 'ring in the gray (or knob)', meaning to substitute a double-sided penny for a genuine one. Coming more up to date we have 'car ringing', which is the replacing of the identification numbers on a stolen car with those from a genuine (usually scrapped) vehicle.

So, that's ringer; what about dead? Dead, in the sense of lifeless, is so commonly used that we tend to ignore its other meanings. The meaning that's relevant here is exact or precise. This is demonstrated in many phrases; 'dead shot', 'dead centre', 'dead heat', etc.

So, 'dead ringer' is literally the same as 'exact duplicate'. It first came into use soon after the word ringer itself, in the US at the end of the 19th century. The earliest reference I can find that confirms the 'exact duplicate' meaning is from the Oshkosh Weekly Times, June 1888, in a court report of a man charged with being 'very drunk':

"Dat ar is a markable semlance be shoo", said Hart looking critically at the picture. "Dat's a dead ringer fo me. I nebber done see such a semblence."

The US standard railroad gauge (distance between the rails) is 4 feet, 8.5 inches. That's an exceedingly odd number.
Why was that gauge used?
Well, because that's the way they built them in England, and English engineers designed the first US railroads.
Why did the English build them like that?
Because the first rail lines were built by the same people who built the wagon tramways, and that's the gauge they used.
So, why did 'they' use that gauge then?
Because the people who built the tramways used the same jigs and tools that they had used for building wagons, which used that same wheel spacing.
Why did the wagons have that particular odd wheel spacing?
Well, if they tried to use any other spacing, the wagon wheels would break more often on some of the old, long distance roads in England . You see, that's the spacing of the wheel ruts.
So who built those old rutted roads?
Imperial Rome built the first long distance roads in Europe (including England ) for their legions. Those roads have been used ever since.
And what about the ruts in the roads?
Roman war chariots formed the initial ruts, which everyone else had to match or run the risk of destroying their wagon wheels. Since the chariots were made for Imperial Rome , they were all alike in the matter of wheel spacing. Therefore the United States standard railroad gauge of 4 feet, 8.5 inches is derived from the original specifications for an Imperial Roman war chariot. Bureaucracies live forever.
So the next time you are handed a specification/procedure/process and wonder 'What horse's ass came up with this?', you may be exactly right. Imperial Roman army chariots were made just wide enough to accommodate the rear ends of two war horses. (Two horses' asses.)
Now, the twist to the story:
When you see a Space Shuttle sitting on its launch pad, there are two big booster rockets attached to the sides of the main fuel tank. These are solid rocket boosters, or SRBs. The SRBs are made by Thiokol at their factory in Utah . The engineers who designed the SRBs would have preferred to make them a bit fatter, but the SRBs had to be shipped by train from the factory to the launch site. The railroad line from the factory happens to run through a tunnel in the mountains, and the SRBs had to fit through that tunnel. The tunnel is slightly wider than the railroad track, and the railroad track, as you now know, is about as wide as two horses' behinds.
So, a major Space Shuttle design feature, of what is arguably the world's most advanced transportation system, was determined over two thousand years ago by the width of a horse's ass. And you thought being a horse's ass wasn't important? Ancient horse's asses control almost everything...... 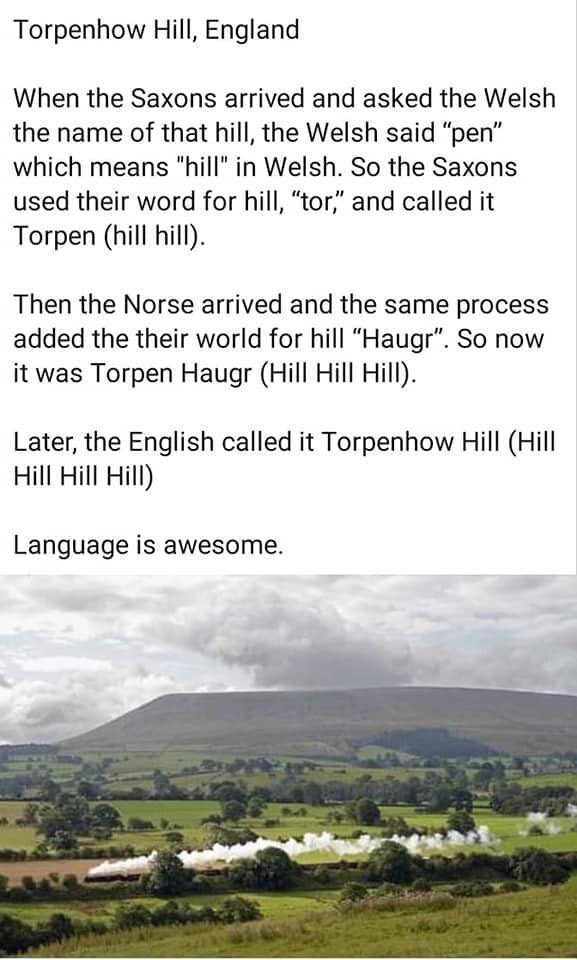 Benny was only 1/4 Torpenhow Hill