A Wacko is a person in your neighborhood...

I don't know if you read about this, but it has been big news hereabouts.  Every day there is a little bit more news about this guy who killed his wife and daughter and then hid out in the bunker that he had been building for eight years while his wife thought he was out hiking in the mountains.

I've had a few weird neighbors over the  years, but none like this.

I had Vulcanized fried squirrel on Sunday.

Our neighbors below us bar-b-que often, and whatever it is they are cooking smells so bad. I don't think I ever want to know what it is. It starts out smelling like a candle or oil lamp just after you blow it out, then goes on to really reek. When they fire it up we used to try to guess what the heck it is, but then started grossing ourselves out and to cut that out.

Even though we live in an urban neighborhood, there doesn't seem to be a scarcity here of what most would consider to be rustic wildlife.

We used to have a family of possums that would come to eat the pet food on the back porches on our block and sometimes a young one would venture through the pet door or an open front door on a warm evening.

Our next door neighbor at the time was a fearful and fearsome man whose daughter was a friend of my younger daughter.  I tried to keep a low profile with him because he was reported to collect guns in his basement and my family background included a healthy respect for weaponry that translated to fear of firearms in my own mind.

One day, one of the adult possums just missed being instant road kill in front of my house and after hissing at me, an innocent bystander, went staggering off across the parking lot of the building next door never to be seen again...alive.

We didn't keep our car in our garage.  It had been a place for the kids to play out of the rain and now we stored bikes, barbeque, and garden equipment and supplies there.  In one corner was a roll of perforated black plastic sheeting used for weed control in landscaping. Hanging from the ceiling was a fly strip.  That summer we seemed to have a lot of flies in the garage and the fly strip didn't do much to control them.  We didn't use the garage much then, but in the fall when the grass started growing again, we started tidying up in there and got the power mower out to mow the grass.

For some reason the black plastic was in a heap in the corner and when I went to replace it on the roller where it belonged, a fuzzy green thing fell out.  It was a well-aged possum corpse.  It looked like something out of a horror comic book of my childhood.

I don't remember whether I only yelped or let out a full-blown bellow or shriek.  The crowd of kids soon gathered.

Eventually the whacko next door admitted to his daughter that he had placed the possum there when he had discovered it dead in his yard.  According to his reasoning, because he had seen a possum alive in our yard once, this dead one must, therefore, be our possum.  Apparently he was merely quietly returning it to us like a borrowed garden tool.

Anyway, I am grateful that he didn't barbeque it.

I was so relieved when his wife divorced him and they moved away. 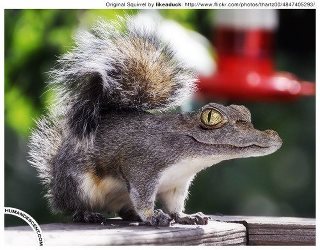 Will it leap from trees and go for your neck?

Or will it just go for your tires?

Will it bury dead fish in your garden?

Or will it clean up road kill?

The men just have to worry.

Was just browsing through the past and found this thread.  I seems more poignant than ever right now. 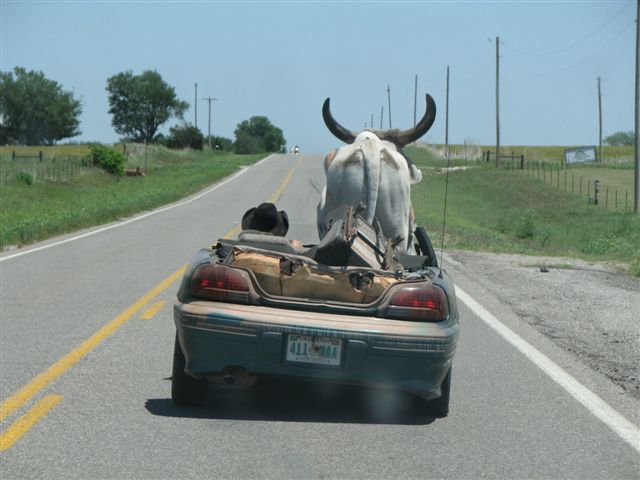 I went and picked up my new bull.