How are you spending your Thanksgiving?

In 1621, the Plymouth colonists and Wampanoag Indians shared an autumn harvest feast which is acknowledged today as one of the first Thanksgiving celebrations in the
colonies. This harvest meal has become a symbol of cooperation and interaction
between English colonists and Native Americans. Although this feast is
considered by many to the very first Thanksgiving celebration, it was actually
in keeping with a long tradition of celebrating the harvest and giving thanks
for a successful bounty of crops. Native American groups throughout the
Americas, including the Pueblo, Cherokee, Creek and many others organized
harvest festivals, ceremonial dances, and other celebrations of thanks for
centuries before the arrival of Europeans in North America.

Historians have also recorded other ceremonies of thanks among European settlers in North America, including British colonists in Berkeley Plantation, Virginia. At this site near
the Charles River in December of 1619, a group of British settlers led by Captain
John Woodlief knelt in prayer and pledged "Thanksgiving" to God for
their healthy arrival after a long voyage across the Atlantic. This event has
been acknowledged by some scholars and writers as the official first
Thanksgiving among European settlers on record. Whether at Plymouth, Berkeley
Plantation, or throughout the Americas, celebrations of thanks have held great
meaning and importance over time. The legacy of thanks, and particularly of the
feast, have survived the centuries as people throughout the United States
gather family, friends, and enormous amounts of food for their yearly
Thanksgiving meal. 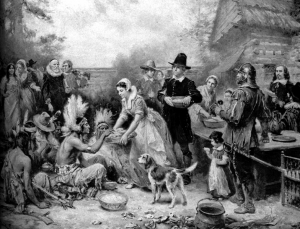 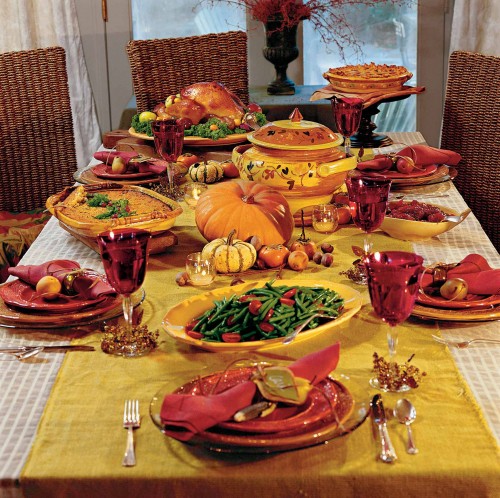 Happy Thanksgiving too everyone, I will be traveling to Atlanta, Ga. for the holiday with part of my family. We will be visiting my mother-in-law and sister-in-law and family. There will be a lot of good food (I will be doing the dressing, macaroni and cheese, red velvet cupcakes, sweet potato pies and sour cream pound cakes. They will be shopping in underground Atlanta for Christmas presents, me, I will be in the hotel sleeping while they all are shopping. I have most of my shopping done for the first time in my adult life. lol
Blessings too you and your families♥