It's the birthday of the novelist who said: "I have only one bit of advice to beginning writers: be sure your novel is read by Rodgers and Hammerstein." That's James Michener (books by this author), born in Doylestown, Pennsylvania (1907).

He never knew who his parents were — he was taken to an orphanage as an infant, and adopted by a Quaker woman in Pennsylvania. When he was 14, he took off and hitchhiked all over the country. He said: "I think the bottom line is that if you get through a childhood like mine, it's not at all bad. Obviously, you come out a pretty tough turkey, and you have had all the inoculations you need to keep you on a level keel for the rest of your life. The sad part is, most of us don't come out."

His mother read aloud all of Dickens' novels, and after a salesman convinced his aunt to buy the complete works of Balzac, she passed them on to her nephew. By the time he got to high school, he had decided he wanted to go to college, and he did — he was a good student and a good athlete, and he got a full scholarship to Swarthmore.

He was drafted into the military during World War II, and he joined the Navy even though he was a Quaker and 36 years old. He was stationed in the Solomon Islands, where he kept records of aircraft maintenance. While he was there, he wrote some stories and sketches based on life in the Navy, and he sent his manuscript anonymously to Macmillan. They accepted it, andTales of the South Pacific was published in 1947. It won the Pulitzer Prize for fiction, and Rodgers and Hammerstein adapted it into the hit musical South Pacific (1949). It's the birthday of novelist Richard Ford (books by this author), born in Jackson, Mississippi (1944). When he was a boy, his mother told him that their neighbor across the street was a writer. He wasn't really sure what that meant, but he could tell it was something important from the way she said it. It turned out that neighbor was Eudora Welty. Ford went to the same elementary school as Welty, and they even had some of the same teachers. But he didn't meet her until many years later.

When he was eight, his father had a heart attack, and he died from a second heart attack when Richard was 16. For much of his childhood, Ford went back and forth between Mississippi and Little Rock, Arkansas. His grandmother and her second husband, a former prizefighter, ran a hotel in Little Rock, and Ford said, "I did everything in the hotel. I worked in it and I played in it. A lot of things go on in great big hotels, behind closed doors, and I saw behind those doors. Recklessness and mistakes." After college, he tried to work for the Arkansas State Police, but he was rejected. Then he got discharged from the Marines because he had hepatitis. He tried law school — his plan was to be a lawyer for the Marine Corps, and then work for the FBI — but he didn't like it, and he dropped out. Unsure of what to do next, he decided to give writing a try.

His first novel was A Piece of My Heart (1976), his only novel set in the South. A few years later, he was teaching at Princeton, and Eudora Welty came to do a reading there. He was nervous about meeting her because he was sure she disliked his novel — he said, "I had a feeling she probably knew about it; that it was full of dirty words and sex and violence." He introduced himself and said that he was from Jackson; she said, "Oh, you are?" and nothing else. He was depressed, convinced that she hated his book and disapproved of him.

Ten years after A Piece of My Heart, Ford published The Sportswriter (1986), the first of his trilogy about Frank Bascombe, a novelist-turned-sportswriter-turned-realtor from New Jersey. Ford did a book signing for The Sportswriter at Lemuria Books in Jackson, and not many people turned up. He said: "Suddenly I looked up and there was Eudora. She'd driven over to the bookstore. She had a deep voice — and I'm making her sound more imperious than she was; she was very sweet — but she said, 'Well, I just had to come pay my respects.'"

Ford and Welty became good friends. Ford shared an anecdote about his writing mentor: "One hot spring day, I was walking with Eudora Welty through a little shopping mall. It was her birthday, April 13th. There was a surprise party waiting at a bookstore down the way. She was 86. As we walked rather slowly along the glass storefronts, we came to where a wide, smiling, pink-faced man was inflating colorful balloons. As each balloon filled and fattened, the cylinder emitted quite a loud whoosh of air. Eudora looked about to find the sound. 'Balloons,' I said. I had her hand. 'Someone's apparently having a do.' 'Oh,' she said. Those luminous, pale blue eyes igniting, her magical face suppressing once again an amused smile. 'I just thought it was someone who saw me, sighing.'"

When Welty died in 2001, at the age of 92, Ford was a pallbearer at her funeral, and he was her literary executor. He co-edited Welty's Library of America: Collected Writings.

Ford's sequels to The Sportswriter were Independence Day(1995) and The Lay of the Land (2006); Independence Day won both the PEN/Faulkner Award and the Pulitzer, the first novel ever to do so. His most recent book of short stories is A Multitude of Sins (2002).

He said, "The thing about being a writer is that you never have to ask, 'Am I doing something that's worthwhile?' Because even if you fail at it, you know that it's worth doing." 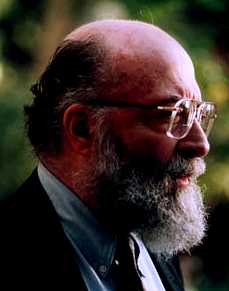 It's the birthday of Chaim Potok (books by this author), born in the Bronx (1929). His parents were immigrants from Poland, and he grew up in a strict Orthodox Jewish culture. When he was about 14 years old, he happened to pick up a copy of Brideshead Revisited by Evelyn Waugh, and it changed his life. He said, "I lived more deeply inside the world in that book than I lived inside my own world." And over the years, he read as much as he could, and he moved away from his parents' strict beliefs. But when he started to write fiction, he went back to his childhood, and he wrote The Chosen (1967), a best-selling novel about two boys growing up together in Brooklyn in the 1940s. Potok continued their story in The Promise (1969), and wrote about similar conflicts between religious and secular communities in many more novels, including My Name is Asher Lev (1972), The Book of Lights (1981), and a group of three related novellas, Old Men at Midnight (2001). 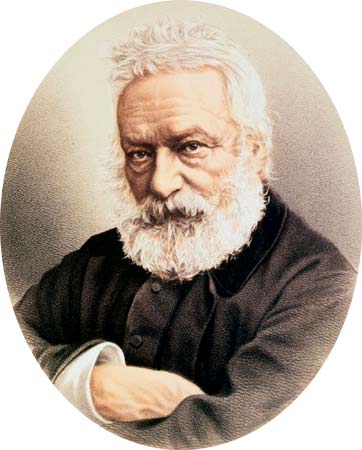 It's the birthday of the man who said, "To love another person is to see the face of God."

That's French novelist Victor Hugo, born in Besançon, France, on this day in 1802.

"There is one thing stronger than all the armies in the world, and that is an idea whose time has come."

He wrote The Hunchback of Notre Dame (1831) when he was in his 20s and became a celebrity.

He used his fame to advocate for political causes he believed in, like denouncing the autocratic regime of Napoleon III. He encouraged French people to rise up and revolt. Napoleon III declared Hugo an enemy of the state, but Hugo managed to flee the country in disguise just before soldiers showed up to arrest him at his home.

He went to Brussels before landing at Guernsey, an island in the English Channel, where he lived in exile for the next 20 years. There, he wrote at a fast pace. And he wrote standing up, at a pulpit, looking out across the water.

He had strict minimums for himself: 100 lines of poetry or 20 pages of prose a day. It was during this time that he wrote his masterpiece, Les Misérables(1865), about a poor Parisian man who steals a loaf of bread, spends 19 years in jail for it, and after his release becomes a successful small businessman and small-town mayor — and then is imprisoned once again for a minor crime in his distant past. The book was a hugely popular, and Hugo returned to Paris, was elected to the Senate of the new Third Republic, and when he died in 1885 at the age of 82, 2 million people showed up to his funeral, a procession through the streets of Paris.