From the Chicago Tribune

The outgoing CIA director charged on Sunday that Donald Trump lacks a full understanding of the threat Moscow poses to the United States, delivering a public lecture to the president-elect that further highlighted the bitter state of Trump's relations with American intelligence agencies.

John Brennan's pointed message on national television came just five days before Trump becomes the nation's 45th president amid lingering questions about Russia's role in the 2016 election even as the focus shifts to the challenges of governing.

"Spontaneity is not something that protects national security interests," Brennan declared.

Trump, who has unleashed a series of aggressive tweets against the U.S. intelligence community and his political rivals in recent weeks, responded aggressively on Twitter several hours later.

"Was this the leaker of Fake News?" Trump tweeted Sunday evening, referring to a recent document that contains unverified financial and personal information that could be damaging to the president-elect. The Associated Press has not been able to verify the contents of the document.

The president-elect remained behind closed doors in his Manhattan high rise Sunday. His team worked to answer questions about his plans at home and abroad once he's sworn into office on Friday. 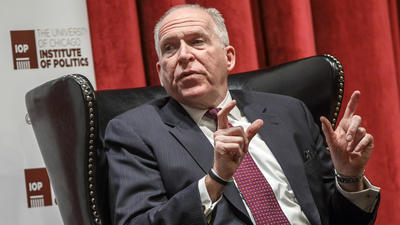 CIA Director Brennan: Give Trump 'benefit of the doubt'

Among Trump's immediate challenges: the United States' complicated relationship with Russia, crafting an affordable health care alternative that doesn't strip coverage from millions of Americans, and growing questions about the legitimacy of his presidency.

Civil rights legend Rep. John Lewis, D-Ga., is among several Democrats in Congress who vowed to skip Trump's inauguration, charging that Russian interference in the 2016 election delegitimizes his presidency.

"There will be many more members who join us in this decision," Rep. Jared Huffman, D-Calif., wrote Saturday on his Facebook page.

Trump's lieutenants pushed back hard Sunday in a round of television interviews.

"I think it's incredibly disappointing and I think it's irresponsible for people like himself to question the legitimacy of the next United States president," incoming White House chief of staff Reince Priebus said of Lewis on ABC's "This Week," insisting that Republicans did not question the legitimacy of President Barack Obama's victory eight years ago. Vice President-elect Mike Pence said on "Fox News Sunday" that he hopes Lewis will change his mind and attend. 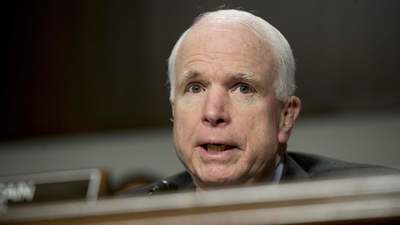 Trump's criticism of intelligence on Russia is dividing Hill GOP

Priebus later acknowledged that conservatives — led by Trump himself — spent years questioning Obama's eligibility to serve as president, suggesting he was not born in the United States.

Trump has done little to encourage unity in recent days, instead inflaming tensions with his critics through a series of tweets. The incoming president tweeted Saturday that Lewis should pay more attention to his "crime ridden" Atlanta-area district, adding that the civil rights leader was "all talk."

Lewis suffered a fractured skull when he led a march in Selma, Alabama, more than a half century ago and has devoted his life to civil rights.

The current White House chief of staff, Denis McDonough, said "Lewis has literally fought, bled and gone to jail" during what he called his "remarkable life." He encouraged the incoming president to move past Lewis' criticism.

Questions about Trump's relationship with Russia have dominated the days leading up to his inauguration.

Ret. Gen. Michael Flynn, who is set to become Trump's national security adviser, has been in frequent contact with Russia's ambassador to the U.S. in recent weeks, including on the day the Obama administration hit Moscow with sanctions in retaliation for the alleged election hacking, a senior U.S. official said.

"The conversations that took place at that time were not in any way related to the new U.S. sanctions against Russia or the expulsion of diplomats," said Vice President-elect Mike Pence, also in an appearance on "Fox News Sunday."

Repeated contacts just as Obama imposed sanctions would raise questions about whether Trump's team discussed — or even helped shape — Russia's response. Russian President Vladimir Putin unexpectedly did not retaliate against the U.S. for the sanctions or the expulsion of 35 Russian diplomats, a decision Trump quickly praised.

Trump has repeatedly called for a better relationship between the U.S. and Putin's government. He suggested in an interview with the Wall Street Journal on Friday that he'd consider easing the latest sanctions on Russia.

"I think he has to be mindful that he does not have a full appreciation and understanding of what the implications are of going down that road," Brennan said.

Donald Trump loves superlatives: words like "biggest," "best" and "greatest" pepper many of his statements, whether at a microphone or on Twitter. But a recent poll lends him another, less attractive superlative: the lowest favorability rating of any incoming president in at least 40 years.

That's what a new ABC News-Washington Post poll shows, with only 40 percent of Americans currently viewing Trump favorably and 54 percent unfavorably. That's the lowest favorability for any incoming president since at least Jimmy Carter in 1977 in that poll. (Carter's data are the earliest the poll presented.) The next-lowest performer on this measure was George W. Bush in 2001, and his favorability rating was 16 points higher than Trump's currently is.

A new CNN/ORC poll bolsters this finding, showing Trump with 44 percent favorability (along with 53 percent unfavorability). (A Pew poll from last month had him at an even lower 37 percent.)

Americans have a similarly dismal view of his transition — in both polls, only 40 percent of Americans said they approve of how Trump is handing his transition.

According to the ABC-Washington Post data, that is likewise far lower than for other recent presidents. George H.W. Bush, Clinton and Obama all had transition approvals of 80 percent or higher. Even the relatively unpopular George W. Bush received 72 percent approval of his transition, according to the ABC-Washington Post data. (The CNN poll likewise found that only 40 percent of Americans approve of how the president-elect is handling the transition.)

Trump himself, of course, isn't pleased with the latest numbers and used his favorite social media platform to voice his disapproval on Tuesday morning:

Ironically, that kind of complaining about poll numbers may be helping to drive those poll numbers lower. Arizona Republican Sen. John McCain raised this as a possibility on Tuesday.

The same people who did the phony election polls, and were so wrong, are now doing approval rating polls. They are rigged just like before.

"I think you can assume that it is because he seems to want to engage with every windmill that he can find, rather than focus on a large aspect of assuming the most important position on earth," he told CNN's Chris Cuomo. "And, obviously, apparently, according to the polls, many Americans are not happy with that approach, when he has not even assumed the presidency."

The tweeting itself hasn't endeared Trump to many Americans. A recent Quinnipiac poll found that almost two-thirds of American voters believed that "Trump should close his personal Twitter account." Even Republicans were about evenly split, with 49 percent saying he should close the @realDonaldTrump account, compared with 45 percent who disagreed.

Even this relatively low favorability, though, is an improvement over Trump's midcampaign lows. As of April 2016, Trump's favorability was only at about 28 percent, according to averages from RealClearPolitics. That average also trended upward after Election Day, when it was 37.5 percent, though it has leveled off since mid-December, settling at just above 42 as of Tuesday.

And Trump still won. What's more, however ugly Trump's numbers may be, he may take some small comfort that when he takes office, his administration won't be the most unpopular institution in Washington — Congress' approval rating is currently at 14 percent.

And that Congress, controlled by Republicans, gives him wide latitude in starting out on policy.

Are you going to watch the swearing in and the dance party? I'm tempted not to, but morbid curiosity drives me. You can take comfort in the Blue Lady's company. I'm inviting The Naked Grape.

I was planning to watch. However, when I checked my calendar, I discovered that it was laundry day.Darn.

I will not watch. I am planning to go out for lunch with some work friends, one of whom voted for the first time ever in November because she hated Trump so much. (She's in her 50s.)  I am marching in a local Women's March on Saturday, even though it all seems futile.  The whole thing reminds me of the Vietnam War and Nixon, and we all know how badly that turned out.

Ronald McDonald lives and dies by his perception of how well-liked he is.  He dismissed his low approval ratings recently, but the fact is, he knows they are true, as does his handlers.

There is no futility in the demonstrations that are about to take place across the country. They are and will be a constant reminder to him that he does not have the full support of many Americans and much of the rest of the world.

You guys are lucky to have missed the speech_ tuneless yelling into the mic about America  First and the days of Washington Insiders being over. Sounds like he's still campaigning at a rally. Horrible. I'm guessing he really did write it himself. It did not soar, but crawled on its hands and knees over broken glass.

Thanks for letting us know, Westerly.

And George Will agrees with you:

From The National Review:

A Most Dreadful Inaugural Address


Twenty minutes into his presidency, Donald Trump, who is always claiming to have made, or to be about to make, astonishing history, had done so. Living down to expectations, he had delivered the most dreadful inaugural address in history.

Kellyanne Conway, Trump’s White House counselor, had promised that the speech would be “elegant.” This is not the adjective that came to mind as he described “American carnage.” That was a phrase the likes of which has never hitherto been spoken at an inauguration.

Oblivious to the moment and the setting, the always remarkable Trump proved that something dystopian can be strangely exhilarating: In what should have been a civic liturgy serving national unity and confidence, he vindicated his severest critics by serving up reheated campaign rhetoric about “rusted out factories scattered like tombstones across the landscape” and an education system producing students “deprived of all knowledge.” Yes, all. But cheer up, because the carnage will vanish if we “follow two simple rules: Buy American and hire American.” “Simple” is the right word.

Because in 1981 the inauguration ceremony for a cheerful man from the American West was moved from the Capitol’s East Portico to its West Front, Trump stood facing west, down the Mall with its stately monuments celebrating some of those who made America great — Washington, Jefferson, Lincoln. Looking out toward where the fields of the republic roll on, Trump, a Gatsby for our time, said: “What truly matters is not which party controls our government but whether our government is controlled by the people.” Well. “A dependence on the people,” James Madison wrote, “is, no doubt, the primary control on the government; but experience has taught mankind the necessity of auxiliary precautions.” He meant the checks and balances of our constitutional architecture. They are necessary because, as Madison anticipated and as the nation was reminded on Friday, “Enlightened statesmen will not always be at the helm.”

Refreshing to hear that from the National Review. Most of the talking heads on the news shows are generously describing the speech as "workmanlike," while keeping a straight face and pretending it was a normal sort of speech. It was an abnormal speech, troubling in its threatening undertones. You were smart to save yourself the ugliness. Better to read George Will.

(I'm  to fix myself a vodka and tonic right now. Maybe it will bleach out my memory)