(I couldn't find 'The Latest in a long line of stupid criminals' thread--so I am beginning anew.  Starting off with a dummy who tried to put a dummy to work!) 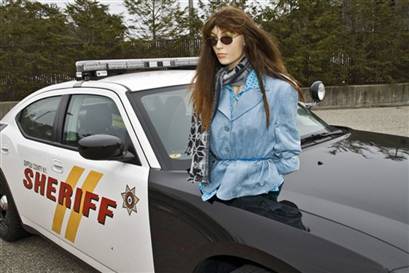 A New Yorker faces a $135 traffic fine for using a mannequin as her "plus one" in the high-occupancy vehicle lane of the Long Island .

An alert sheriff's deputy on Long Island became suspicious this week when he saw the "passenger" wearing sunglasses and using the visor. The problem: The sky was overcast.

When he stopped the vehicle, he found the mannequin, fully dressed with a long dark wig, blazer, shirt and

The 61-year-old driver left with a summons. In addition to a fine, she could be hit with two points on her license.

"At first glance, this may seem humorous but it is not a joking matter when you drive off with a ticket," Sheriff Vincent F. DeMarco told NBC News.

Permalink Reply by Slayer Dug on February 6, 2010 at 6:09pm
Cop should have let her off for her ingenuity.

Permalink Reply by stillgoing on February 6, 2010 at 11:17pm
There have been cases where someone will dress up their blow up doll to get into the car poll lane. Traffic sucks but is it really that bad?

Permalink Reply by HAVE_A_HEART on February 6, 2010 at 8:15pm
(Here is a clue--if u are going to commit a crime--it might help if you know where certain polices stations are--in the neighborhood you are committing the crime in!!)

Riverton police say the 26-year-old ran out of the store after grabbing the bottle of booze and a package of cough drops Wednesday and hid in a nearby building, which happened to be the police station.

Police say the man then ran out of the police station, but not before a dispatcher had spied him on the station's surveillance camera and alerted officers.

The man, who police say was drunk, was caught soon after. He was taken into custody on preliminary charges of resisting arrest and shoplifting.

MEMPHIS, Tenn. - Communication skills were clearly lacking in a woman who police said tried to rob two Memphis credit unions. She fled empty-handed both times. The Commercial Appeal reported the suspect is a short, thin black or Hispanic woman dressed in dark clothing with a red scarf.

A teller couldn't understand the would-be robber's mumbled commands in her first attempt Tuesday. Police said the woman threw a holdup note at the teller, then ran from the building.

A few hours later at another credit union, a teller asked a woman several times if she needed help as the woman fumbled in her purse, then handed over a note. When she also pulled a gun, the teller left.

The woman ran outside, tripped and fell, dropped her gun — then got into a car and left.

updated 3:39 p.m. ET, Fri., Feb. 5, 2010
GRAND JUNCTION, Colo. - A pot-smoking parolee in Colorado faces criminal charges for allegedly offering a cash bribe to try to pass a drug test. Police said a 34-year-old man tried Jan. 3 to bribe a state worker to allow him to use a device called a "Whizzinator" to pass a drug test he had to take while on parole. The man allegedly said he had a medical marijuana card, though officials couldn't confirm whether that was true.

Colorado's medical marijuana law allows convicted criminals to get cards, but those on parole still must pass drug tests. State lawmakers are currently weighing new marijuana rules that would prevent people on parole from having the cards.

Prosecutors said the man offered a state worker $300 after the worker found him with the "Whizzinator," a device of tubing and heater packs attached to a prosthetic penis sold to cheat drug tests.


An arrest warrant affidavit reported by The (Grand Junction) Daily Sentinel Thursday said a caseworker became suspicious about his urine sample after he tried to block the worker's view while he was providing his sample.

When asked to raise his shirt and lower his pants, the man was seen wearing the "Whizzinator." The man allegedly offered the state worker $300, then $500, to throw away the device. The worker refused.

The caseworker took the device, and the man left.

That same day, the man called state parole officials and said he had panicked after smoking marijuana on New Year's Day, the anniversary of his father's death, saying he was "having a very hard time dealing with it."

The man now faces felony bribery charges and is being held in the Mesa County Jail. He was on parole for a 2007 menacing conviction.

Permalink Reply by darroll on February 6, 2010 at 10:13pm
Seems this Arkansas guy wanted some beer pretty badly.
He decided that he'd just throw cinderblock through a liquor store
window,

grab some booze, and run. So he lifted the cinderblock and heaved it
over

his head at the window. The cinderblock bounced back and hit the
would-be

thief on the head, knocking him unconscious. Seems the liquor store
window

was made of Plexiglas. The whole event was caught on videotape.

Permalink Reply by Whiny Old Bastard on February 6, 2010 at 11:29pm
What's a car pool lane?
I don't think we have those in Alabama.

Permalink Reply by HAVE_A_HEART on February 7, 2010 at 5:57am
A car pool lane is an 'express lane' that is supposedly only to be use by vehicles with 2 or more occupants in it. supposedlyu this cuts down on vehicles that are on the road during heavy traffic times. Supposedly.

Permalink Reply by Whiny Old Bastard on February 6, 2010 at 11:30pm
One more reason to love the South.

Donna McPherson says she tied up Lexie, her 10-year-old Westie, outside a Park Slope supermarket "for two minutes" while she bought milk.

She heard a "funny bark." When McPherson went outside, she found the little white dog shivering. His green wool coat, with leather trim and belt, were nowhere in sight.


McPherson said the dog coat was worth $25. She said that, fortunately, Lexie wasn't wearing his pricier Burberry.